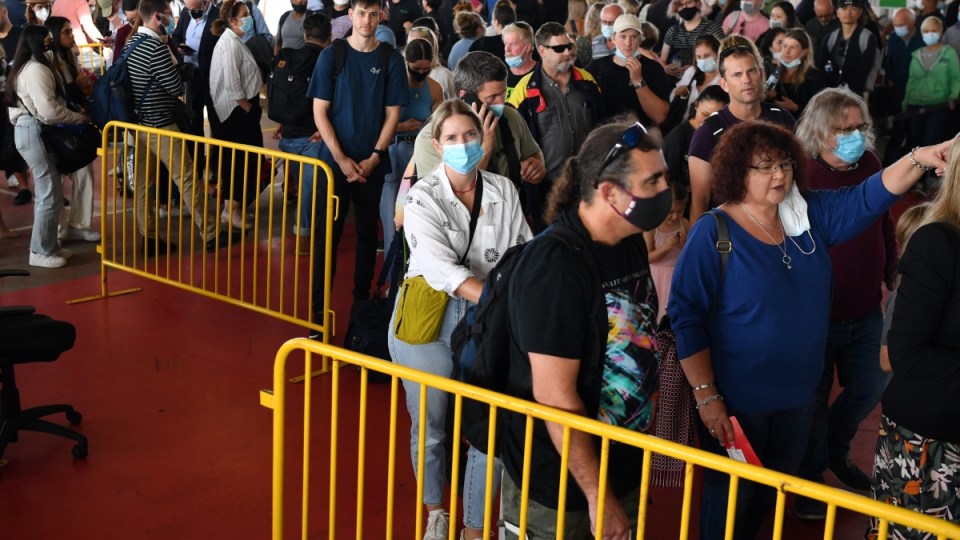 There have been days of delays at Sydney and Melbourne airports. Photo: Getty

A Coalition senator has lashed out at airlines, as travellers are warned to expect days more airport chaos as the long Easter weekend gets underway.

Sydney Airport was once again clogged with travellers trying to get away for Easter on Wednesday, with passengers stuck in long queues as the system buckles under the strain.

Early on Wednesday traffic around the domestic airport was backed up for a kilometre, while queues outside the terminal snaked back for up to 100 metres.

There were also also long queues and heavy traffic around Melbourne airport. Mechanical faults also caused chaos at Tullamarine on Monday, which was one of the airport’s busiest days on record for domestic departures.

On Wednesday, Queensland senator Matt Canavan lashed out at the chaos, saying airlines should have been better prepared for the Easter getaway.

He told Nine’s Today show he was concerned about the knock-on effects for Queensland tourism.

“It is not good enough … Both Qantas and Virgin and all the airlines have received billions and billions of dollars to get them through the pandemic. They are letting us down at this time …It has big knock-on effects to the tourism industry,” Senator Canavan said.

Today also reported that Qantas had taken the unusual measure of calling in senior managers to help unload bags ahead of another day of chaotic queues.

“I want to start by apologising to them for any inconvenience that they’ve experienced,” he told Sydney radio 2GB on Wednesday.

The delays to processing passengers were primarily due to staff shortages.

“Everyone in the aviation industry has been rebuilding their business from the ground up,” Mr Culbert said, adding it was impossible to recruit enough staff and the airport’s security provider had 100 vacancies.

“But then you add on that the COVID issues – on any given day up to 20 per cent of staff can’t come to work due to COVID,” he said.

This week, NSW and Victoria have both amended COVID isolation rules to make airline staff and airport workers exempt.

Mr Culbert said the airport would also normally boost its staff at peak times such as Easter, “but if you don’t have the staff then you can’t do that”.

“We’re doing the best we can – we’re mobilising staff from all different areas of the airport … but the bottom line is when you’re operating at 60 per cent of staff capacity and you’re back at almost 100 per cent of passenger numbers – then there’s going to be a shortfall.”

Easter Thursday is traditionally one of the busiest days for the airport with about 80,000 passengers expected.

“Be prepared, check-in online if you can and … if you don’t need to check-in a bag then try to avoid that – that’s a major choke point in the system,” Mr Culbert said.