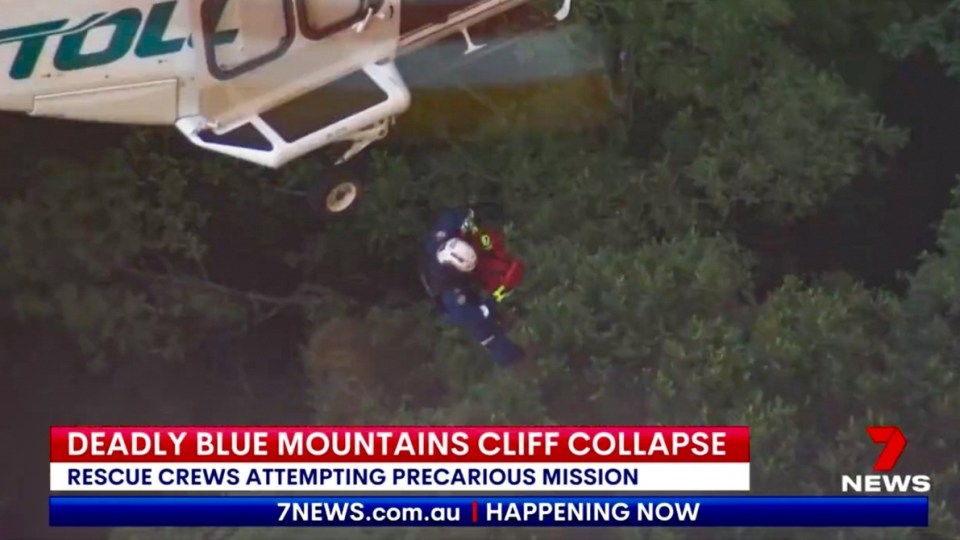 Two of the injured family members had to be sedated before they could be winched to safety. Photo: AAP

Searchers have recovered the bodies of a father and son who died after a landslide in the Blue Mountains on Monday, as more details emerge about the family tragedy.

It came as details emerged of the emergency call made by a 15-year-old girl alerting authorities to the tragedy.

“I don’t know where we are,” she reportedly told triple-0 operators.

The teenager was in shock but uninjured after the landslide at Wentworth Pass, west of Sydney, that killed a 49-year-old man and nine-year-old boy.

Dense bush and difficult terrain made the operation harder, but their bodies were winched up from the remote location by police helicopter on Tuesday morning.

A 50-year-old woman and a 14-year-old boy were critically injured in the landslide. They were winched from the scene and taken to hospital on Monday, with significant head and abdominal injuries.

The teenager was treated for shock after the incident, which was reported to emergency services about 1.40pm on Monday.

Paramedics then walked her from the scene, which is about 90 minutes from the site’s car park. Police said she was lucky to be alive.

The family were British nationals who were on holiday in Australia.

“It’s quite a tragic scene.

“In terms of the site, it’s extremely dangerous and unstable.

“Both patients have significant head and abdominal injuries requiring sedation and intubation prior to them being extricated via winch,” he said.

“It is terribly sad to have lost two lives here today and my heart goes out to the families and the survivors of this horrific ordeal who have witnessed what is certainly a traumatic event.”

Mr Clarke said the rescue operation was “complex and delicate”, as crews worked to access patients in rugged bushland and on unstable ground.

Monday’s tragedy followed weeks of heavy rain across NSW, which led the National Parks and Wildlife Service to close some popular walking tracks “due to flood damage and ongoing rockfall risk”.

On Tuesday, it said the tourist site had been closed for a safety assessment.

“Unfortunately it is not possible to predict and eliminate all natural risks such as rockslides, which can occasionally occur around the state,” it said.

“The walking track where this incident occurred was inspected in the days before the rockslide as part of a routine track assessment program.”

With significant rainfall predicted later in the week, the national park will remain closed.

Blue Mountains mayor Mark Greenhill described the accident as “a tragedy beyond words”. The council has also closed all of the tracks it manages in the area.

Cr Greenhill said there had been $400 million of damage to infrastructure in the area after three wet summers in a row – including more than 400 millimetres of rain just last month.

“The amount of water that has hit our area is unbelievable in that period of time. We’ve seen infrastructure of ours just dissolving. Roads literally dissolving,” he said.

“This tragedy sends us a message. The amount of water has hit our landscape has done serious damage. As far as the council is concerned, we’re going to take all steps.”

NSW Police are working with the British consulate to contact relatives of the family.