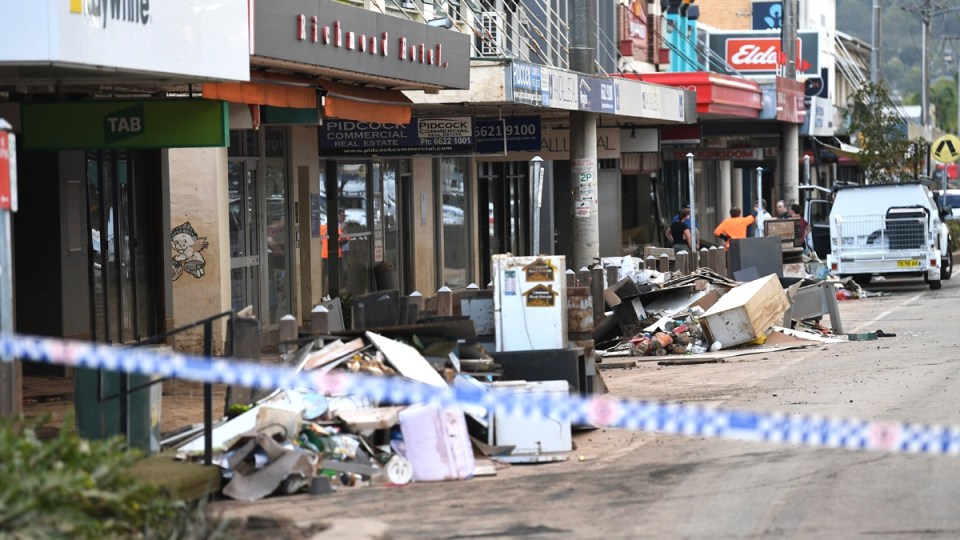 On the last day of summer, huge patches of ominous red and black were hovering on the rain radar as a large, slow-moving beast of a low-pressure system headed straight for Lismore.

We’d only just recovered from the ‘big one’ in 2017. I wondered how we would cope with another one so soon, but I tried to stay positive, hopeful it might somehow change course.

When the flood warning was revised to 13.5 metres, with rainfall likely to exceed 500 millimetres in 24 hours, my hope faded, replaced by a sickening sense of dread.

I knew that we were about to experience something that our community had never lived through before. And I knew it was going to be very, very bad.

I started blitzing social media to tell people to climb onto their roofs, but the water was rising too fast for them to get out.

So many people were left trapped inside and on top of their roofs as the water engulfed our city and thousands of homes with it.

People were screaming out for help on social media because the emergency 000 number and the SES line had completely melted down.

Rescues instead were carried out by a huge civilian flotilla in tinnies, jet skis and kayaks.

People are still telling me how they waited for hours in freezing cold water up to their chest shivering on rooftops desperate for someone to come and help them.

The flood destroyed our city. Everything was obliterated. It has left destruction even members of the ADF have described as looking exactly like a war zone.

For the past three weeks, I’ve been working non-stop alongside brave individuals and community groups, doing whatever we can to support our regional and local flood response and recovery.

We didn’t know how we’d do it again after 2017, which was so emotionally and physically exhausting, many of us still carry the scars.

But we have no choice. And as bad as 2017 was, we were not prepared for this.

Thousands in my community have lost absolutely everything, only managing to get out with the clothes on their backs and their beloved pets.

The sheer number of requests for help far outweighed the capacity of the emergency services and the community volunteers working alongside them, and despite all of our best efforts, it took days to make sure everyone was safe.

The people who could went to stay with friends up on the hill and our wider community opened their homes and their hearts to the thousands of people who were instantly made homeless.

Evacuation centres across the region had thousands of people crammed in on top of each other.

As I write this more than three weeks later, many people are still staying with friends and generous strangers and households are full to bursting.

Some have managed to find temporary housing, but it’s far away and I worry that they will never find their way back to our community and to the people here who love them.

We had a housing crisis before this disaster happened and now it is exponentially worse.

There is no temporary accommodation and the state government is moving too slowly.

We have a long, long road to recovery ahead.

For so many here, it’s trauma upon trauma. As resilient as we are, it’s just too much.

March 30 this year marks five years since the 2017 flood that was one of the most damaging floods in living memory. That record has now been totally eclipsed.

I’ve heard many say “We couldn’t have predicted this freak event”, but they’re wrong.

Climate change, which is driven by burning coal, oil and gas, is supercharging our atmosphere and leading to more frequent and more intense storms and heavy rains, like the rain bomb we just endured.

If we’re to learn a lesson from the catastrophic flooding that we are now seeing happen in Australia every few years, it’s that we are severely underprepared for catastrophic events like this one.

We urgently need to address the root cause of this: Climate change.

We are living a reality of disaster upon disaster, and recovery upon recovery. Our community has lived through the floods in 2017, the Black Summer bushfires, COVID-19 – and now this.

Our most vulnerable residents live in the epicentre of this event and they just keep being hit harder and harder each time.

It makes me so angry that my community is living the daily impacts of climate change and our governments are not doing enough to address the root cause of the problem.

The good news – and the hope I hold onto – is that the faster we cut emissions, the more climate damage we can avoid.

No developed country in the world has more to gain from the world moving to a zero-carbon economy than right here in Australia.

Australia has the natural resources to become a world leader in renewable energy, as well as in industries such as clean manufacturing, minerals processing and renewable hydrogen.

Local governments, like Lismore City Council, have been working together with our communities to take action against climate change and build resilience. But we need more support and we need it urgently.

That’s why I’ve joined 28 other mayors and councillors – from Logan City Council in Queensland through to Eurobodalla Shire Council in New South Wales – to call on our federal leaders to immediately step up and reduce the climate impacts that put our communities in the firing line.

If we want to have long-term security and resilience, we need our government to put policies and actions in place to protect us.

Now is the time for our government to lead the country in delivering on an ambitious emissions reduction target this decade to protect communities like ours from the future climate shocks that we know are coming and that we are living every single day.

The longer we delay climate action, the more damage, destruction and despair we will have to live through.

We deserve a future that gives us hope.

Elly Bird is a Councillor on Lismore City Council

Five years after ‘the biggest flood in living memory’, our city once again lies in ruins