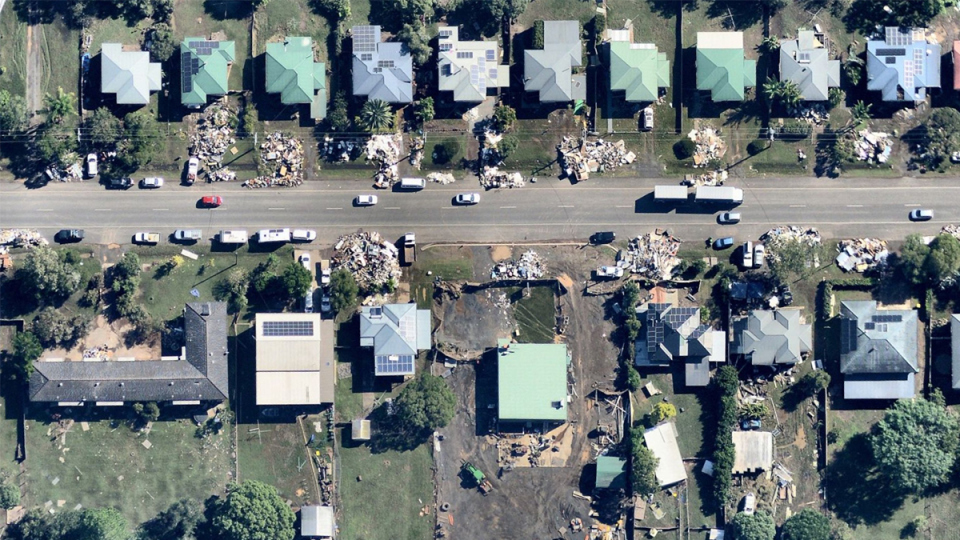 South Lismore is in clean-up mode after the deadly floods. Photo: AAP

Northern Rivers locals have teamed up to connect people who lost their homes to the floods with vacant Airbnb properties and other temporary accommodation.

One of the first initiatives was Donate A Stay, set up in early March by Byron Bay developer and music festival organiser Brandon Saul.

His most recent project before the floods was revamping Fletcher Street Cottage as a drop-in community centre for homeless and at-risk locals, so the initiative was a natural next step.

“That was a project we were already working on and about to launch, and when the floods happened we just sat down and thought, ‘What’s the most valuable thing we can do?'” Mr Saul told The New Daily.

Mr Saul used his network to reach out to property owners and put a callout to flood-affected people on social media.

Organisations like Mullumbimby District Neighbourhood Centre have also referred people to Donate A Stay on top of their own flood relief efforts.

He has even done a deal with a motel, and is in talks with a hostel about hosting construction workers who will soon be in the area.

The largest operator of Airbnb properties in the Northern Rivers is a company called A Perfect Stay, which manages these holiday homes on behalf of owners who live elsewhere.

This company quickly teamed up with Mr Saul’s initiative to become a major contributor of crisis accommodation.

A Perfect Stay was able to accommodate 74 flood victims across 35 donated homes spanning from Mullumbimby to Ballina, and beyond.

“There was absolutely a need to give people a break,” the company’s strategy manager Sarah Workman told TND.

“So many people needed to reset and have family time or just work out their next steps.”

One of the main challenges was matching people with accommodation in their own areas.

“And so trying to match people’s needs with what was available was not an easy process.

“We had a lot of accommodation that was too far afield, because people have been very generous.”

Other factors included making sure homes were suitable for people with disabilities, and taking care of households with pets.

According to open source database Inside Airbnb, there are roughly 5500 homes and apartments listed in the Northern Rivers region.

On average, each listing is only occupied 21.2 per cent of the time.

Pressure had been mounting on Airbnb since the floods to house people who have been forced to evacuate.

In Europe, the company offered free accommodation to Ukrainian refugees, and many Australians saw this as evidence that the online accommodation giant could do the same thing here.

On March 10, Airbnb announced it would work with hosts and the Australian Red Cross to provide free accommodation to flood victims.

“We are extremely grateful for the generosity of our host community, who, through this effort with the Australian Red Cross, have been offering up their homes to those in need of free, temporary accommodation,” said Airbnb’s manager in Australia Susan Wheeldon.

Neither organisation was able to confirm how many people have been housed through the scheme.

About 5500 homes in the region are flood damaged and more than 2800 are uninhabitable, according to the NSW government.

“There were no houses available before this flood happened,” Mr Saul said.

“COVID exacerbated that with a lot of people leaving the city for the country. So this has happened in the middle of a housing crisis.”

On Thursday, the state government announced a rent relief package for people who have been affected by the floods.

It coincides with a move by NSW Greens housing spokesperson Jenny Leong to introduce a moratorium on evictions during floods.

“In addition, we’d have a cap on rents to see that greedy landlords don’t seek to profit from what is a horrific and tragic crisis across the state,” the state MP said.

But for now, people are dependent on temporary accommodation.

Most housing organised through Donate A Stay has lasted for one or two weeks.

The longest stay is set to last for six months.

“I’m presuming the government will come through with a solid package that will help assist people with longer-term problems,” Mr Saul said.

“We just jumped in to try and solve the immediate problem.”

In the meantime, locals have been stepping up to do much of the work in the region – be it rescuing people in tinnies, volunteering to clean people’s homes, or just providing food and other essentials to those who have lost everything.

Mr Saul added: “I firmly believe this is going to be a long-term, community-led response.”