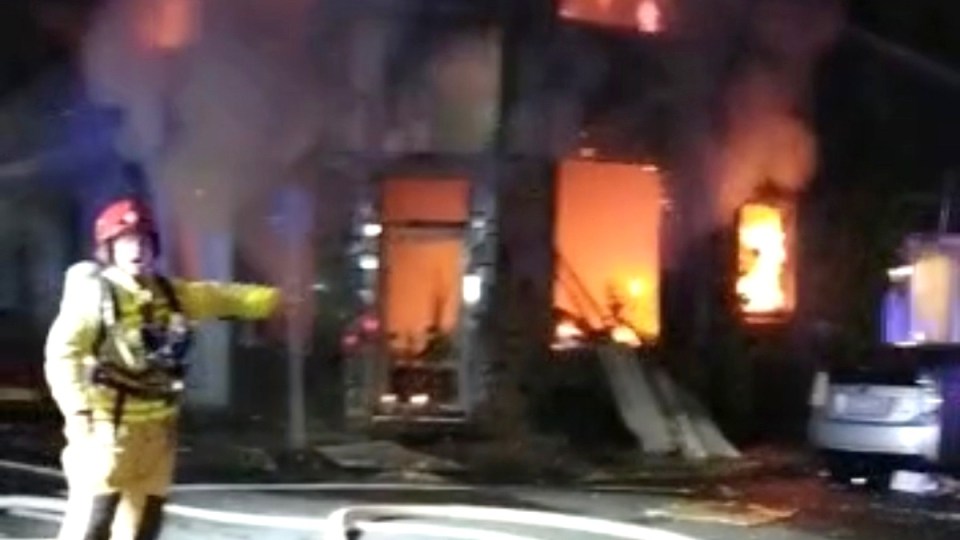 At least three people died in the fire, which erupted early on Tuesday morning. Photo: Fire and Rescue NSW

A former resident of a Sydney boarding house has been accused of starting the explosive fire that engulfed the dilapidated two-storey building, killing at least three men.

An explosion early on Tuesday at the Newtown boarding house ignited a fierce blaze, trapping and killing at least three of the 11 residents.

NSW Police have grave concerns for a fourth man who has yet to be located.

Eight men were able to escape the fireball and two remain in hospital, one is in a critical condition. One man in his 80s jumped from the burning building and suffered a heart attack as well as serious leg injuries.

A 45-year-old man faces three charges of murder as well as one count of maliciously destroying or damaging property by fire or explosive after the blaze ripped through the inner-west boarding house.

The accused man surrendered to police at the Surry Hills Police Station on Tuesday night. He was charged and refused bail to appear at Central Local Court on Wednesday.

Two of the bodies have been removed from the charred building. Police hoped to find the third body on the second floor on Wednesday but there were fears the building was structurally unsound.

State Crime Command Director Detective Chief Superintendent Darren Bennett said the man charged with murder was a resident and was one of the men who police initially feared had perished in the blaze.

“We will be alleging he was there when the fire was set,” he said on Wednesday.

Police are yet to ascertain the motive for the fire.

“The motivation behind the torching of the building is something we will look into,” he said.

“It has been reported that there has been an accelerant used, and we have had that advice given to us and it will form part of the brief of evidence.”

Police are also still trying to find the owner of the boarding house.

Assistant Commissioner Peter Cotter thanked people who had offered food and accommodation for “some of our less privileged people” who had been left homeless by the fire.

“We all understand boarding houses are there for a specific reason, to help people who are down on their luck,” he said.

The bodies of the three people found inside the building are yet to be formally identified.

Strike Force Tutt will continue to investigate the fire. It includes investigators from the State Crime Command’s Homicide Squad and the Financial Crimes Squad’s Arson Unit.

Netflix will soon have ads, but it might not be what you think
Man dies in Broken Hill floodwaters
Today's Stories