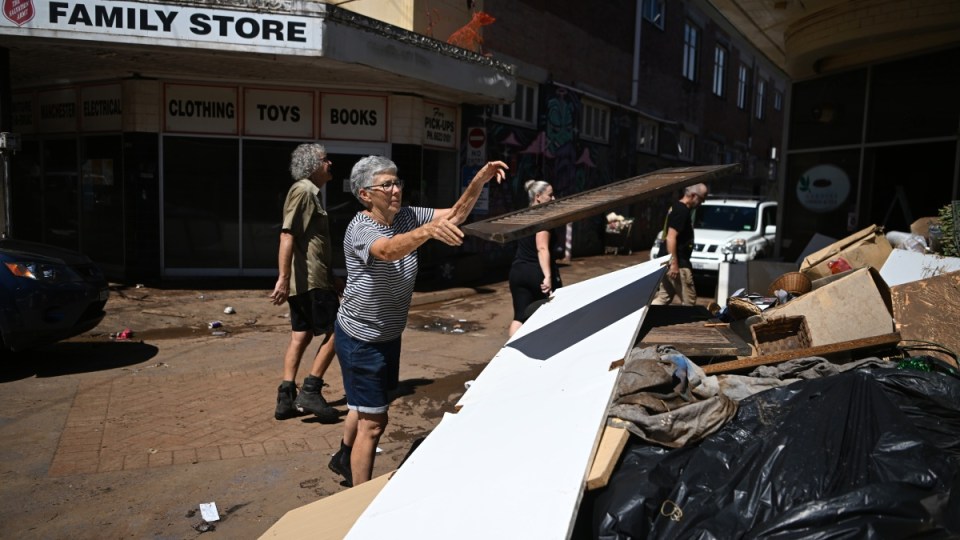 As the flood-hit towns of northern NSW get on with the daunting job of cleaning up after last week’s deadly deluge, alarm is growing about a new health crisis.

NSW Health staff are being sent from Sydney to help with the flood crisis and deal with a lack of medical professionals, as NSW Health Minister Brad Hazard confirmed growing reports of gastroenteritis outbreaks on the NSW north coast.

Mr Hazzard told a budget estimates hearing on Thursday that while Lismore – which was struck by its worst floods on record just over a week ago – still had a hospital, it “basically had nothing” in terms of healthcare.

The relocations would help “to get on the ground confidence for people to see a practitioner … if they’ve cut their finger, if they’ve got gastro”, he said.

Acting chief health officer Marianne Gale said there was “a lot of gastro in the community in general in recent months”.

“In a flood situation there is always that risk,” she said.

Boiled water alerts would need to be issued in multiple areas and evacuation centres were taking precautionary measures to stop the illness spreading.

Meanwhile, Lismore’s mayor said there was an urgent need for semi-permanent dwellings to accommodate people whose homes were destroyed in the northern NSW flood crisis.

Steve Kreig said thousands of people had been homeless since Lismore was inundated with floodwaters on February 28.

“I’m one of them,” he told the Nine Network on Thursday.

“I’m sleeping at a friend’s place.”

Premier Dominic Perrottet said on Thursday more than 2800 homes had been deemed uninhabitable in the area, and 5500 declared “damaged”.

Damage assessments continue, and Mr Perrottet said those numbers were “just the beginning”. Some areas remain cut-off, and cannot yet be assessed.

Mr Perrottet announced a $511 million housing package on Thursday that is expected to support 25,000 households. It is jointly funded with the federal government.

Like thousands of his constituents, Cr Kreig has no long-term plan for where he will live.

“I can’t keep uprooting my family to friends’ places for the next six-to-12 months or until I can rebuild my house,” he said.

The was an urgent need for demountable housing that was weatherproof and could be removed when it was no longer required.

Cr Kreig has been shocked how the region has been treated, saying “politicians … like to pass the buck a lot” about which tier of government is responsible for what.

“You can’t do that in situations like this. There are no borders,” he said.

“I would have felt more assured if Scott Morrison had said, ‘Listen mate you don’t have to worry about that. We will fix it’,” Cr Kreig said.

“This can’t be a political football anymore. There are people who are suffering.”

The local government areas of Richmond Valley, Lismore and Clarence Valley have been declared “catastrophe zones”, and will get extended support. But the Ballina, Byron and Tweed shires were excluded from the most recent announcement, sparking anger about a lack of federal and state government support from some local MPs.

“We’re looking at other impacted areas in those districts to see how we might extend some of that support,” he said in Brisbane.

“As the damage assessments come in, you will add others to that list when you go through the proper process.”

Federal Labor MP Justine Elliot – whose Richmond electorate takes in Ballina and surrounding areas hit hard by the floods – said residents there had been abandoned.

“People are suffering when we are not part of that announcement,” she told ABC Radio on Thursday.

“Many people can’t access housing or money and they need urgent assistance and what we have seen since the flood hit is rolling incompetence from the state and federal governments.”

Mr Morrison also indicated defence troops on the ground in flood regions in NSW and Queensland would reach more than 5000 by the end of Thursday.

Mr Joyce said decisions about which areas get funding were made by the National Recovery and Resilience Agency, based on the recommendations of the states.

“[The states] have the lead on this, they make the call that they want further support, and then the role of the federal government, after we negotiate that, is to [provide] support,” he told ABC Radio.

Mr Joyce said the states provided an assessment of which areas were at the epicentre of disasters.