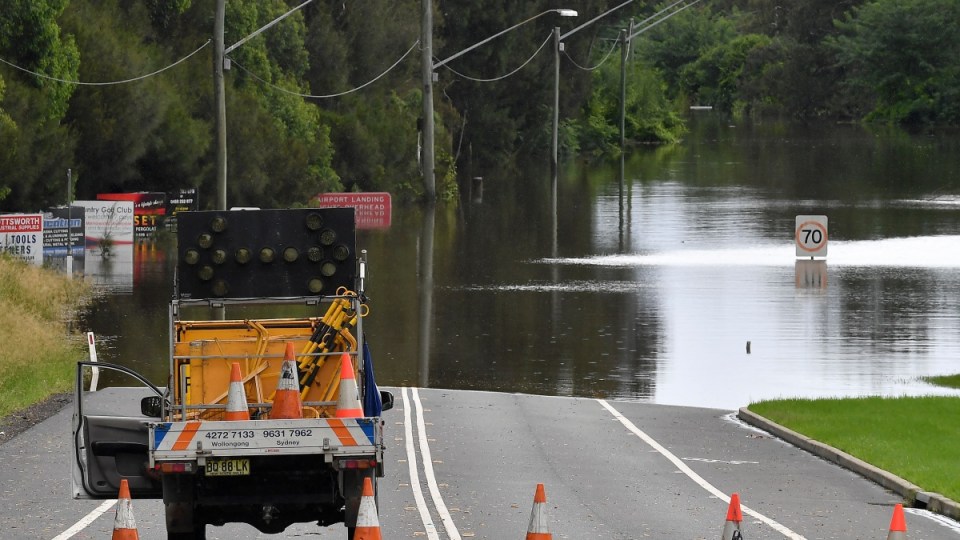 The Bureau of Meteorology says a trough of low pressure lingering near the northern coast is expected to persist for the next few days. Photo: Getty

Thousands of residents in Sydney’s south-west have been ordered to evacuate, ahead of expected major flooding – as the NSW Premier apologised to flood-struck communities for a lack of support.

The NSW SES ordered an evacuation for parts of Camden on Monday afternoon, as floodwaters rose at the Camden Weir, threatening to cut electricity and local access for thousands of people.

It was quickly followed by flood evacuation warnings for parts of Emu Plains and Mulgoa, to Camden’s north.

Earlier in the afternoon, the SES had ordered residents of Picton, south-west of Sydney, to prepare for a possible evacuation order later in the day.

“Once floodwaters begin to rise in Stonequarry Creek you will see flooding of roads, sewerage lines and power may be lost, and properties to be inundated,” the SES said in a Facebook post.

“If you remain in the area you may become trapped and it may be too dangerous for NSW SES to rescue you.”

The warnings came as another east coast low developed across north-east NSW, bringing forecasts of more heavy rainfall and thunderstorms later on Monday and into Tuesday.

Up to 150 millimetres of rain is expected, posing a renewed flood risk for multiple river systems along the NSW coast. Dean Narramore from the Bureau of Meteorology said the flooding would potentially be worse than last week’s.

“It’s this additional rainfall on already saturated soils, catchment and flooded rivers, creeks and streams which is giving us an increasing amount of concern for the communities from the central coast and Gosford, all the way down towards Ulladulla and inland areas as well,” he said.

“We’re looking at flooding similar to last week on some parts the [Hawkesbury] river and in other areas it could be worse than what we saw last weekend, similar to what we saw in March last year.”

With winds forecast to increase up to 90km/h on Tuesday morning, there are also concerns for falling trees and powerlines in a 1000-kilometre stretch from the mid-north coast to the Victorian border.

“Dangerous travel conditions are likely to develop tonight and through tomorrow from the Hunter all the way through the central coast, Sydney metropolitan area and into the Illawarra and Shoalhaven communities,” Mr Narramore said.

Premier Dominic Perrottet apologised on Monday to thousands of people in the Northern Rivers district, after homes and businesses were destroyed when towns such as Lismore and Ballina were inundated last week.

Many had to be rescued by fellow citizens and have since struggled to access basics such as food, water, power, fuel, phones, ATMs, the internet and medical supplies.

“I’m very sorry … but we’re doing everything that we can,” Mr Perrottet told the Nine Network from Lismore.

“Some of those areas will look back at this and say it could have been done better but … we’re doing absolutely everything we can to provide care and support for those who need it to get those essential supplies in,” he said.

The emergency response would be reviewed, he said.

“There’s no doubt that [in] some of the smaller communities there’s a sense of abandonment and I feel very sorry about that.”

Floods have claimed six lives in NSW, including four in Lismore.

On the ground, the Australian Defence Force is helping with the mammoth clean-up with 512 personnel in NSW.

Some 5000 would be available to NSW and Queensland this week, the ADF said.

About 2000 of the 3500 homes assessed so far in the NSW Northern Rivers are no longer habitable, increasing the need for short-term and medium-to-long-term accommodation.

On Monday, Telstra said it had restored about 80 per cent of mobile coverage for communities in northern NSW and 75 per cent of landline connections.

But some areas remained inaccessible due to continued flooding, road damage or a lack of electricity that is hampering the work of about 1000 technicians.

The northern NSW communities of Kingscliff, Main Arm, Mullumbimby, Ocean Shores, Tucabia, Uki and Wooli are among those still having issues with communications.

The State Emergency Service had another 550 calls for help overnight and performed nine flood rescues.

The SES said renewed flooding was likely in the Hawkesbury-Nepean Valley and major flooding continued in the Upper Nepean, Nepean, Hawkesbury and Colo Rivers.

Rainfall on Monday and Tuesday could push the Nepean River at Penrith over six metres causing minor floods.

At Wiseman’s Ferry, the Hawkesbury River was flooding at moderate levels on Monday morning. It was expected to rise over the major flood level of 4.2 metres on Monday night, and up to 4.4 metres by Tuesday.

There is also major flooding at North Richmond and more likely at Putty Road as the Colo River is expected to exceed 10.7 metres on Monday night and continue rise further to 11.5 metres on Tuesday.

Rain is causing significant travel delays with cancellations expected on most Sydney Trains, NSW TrainLink Intercity and Regional train services. Drivers were urged to stay off the roads unless it was absolutely necessary.

Evacuation warning for thousands in NSW, ahead of dangerous storms