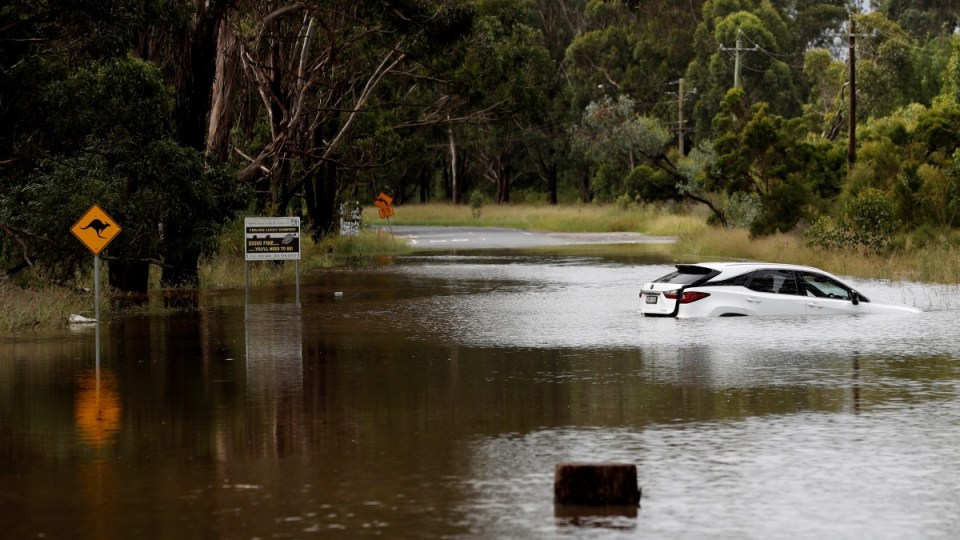 A car floats in floodwaters on the Hawkesbury River, where there are still fears for further rises. Photo: Getty

More evacuation orders have been issued for thousands of people in Sydney’s north-west, as rivers rise ahead of further expected downpours.

An evacuation order has been reissued for Lower Portland on Friday morning, with residents urged to leave immediately as floodwaters rose.

NSW SES advised all properties on following streets in Lower Portland along the Hawkesbury River to evacuate or move to higher ground:

Also on Friday morning, the SES told residents in the lower areas in the town of Portland, near Lithgow on the Hawkesbury River to evacuate and move to higher ground.

And people in the eastern part of Wisemans Ferry, 75 kilometres north-west of Sydney, were told to get ready to evacuate properties around the town centre in coming hours.

Dean Narramore from the Bureau of Meteorology said there was major flooding at North Richmond. Elsewhere, the Nepean River had fallen slowly overnight, but some moderate flooding remained.

“It looks like the water peaked around Windsor just below the major flood level,” Mr Narramore said.

The weather bureau has also issued a severe thunderstorm warning for the Hunter and the NSW mid-north coast, warning expected heavy rain could lead to flash flooding during the day.

Mr Narramore said heavy rain had eased in the Hunter after falls of 50-100 millimetres on Thursday night – with some some isolated totals near 200 millimetres around the Barrington Tops.

“Because of the rainfall we had moderate to major flooding on rivers across the Hunter. The Paterson Williams River is in moderate flood and we could see major flooding on the Gloucester River late this morning into the early afternoon,” he said.

NSW Deputy Premier Stuart Ayres urged residents to be on alert for changes in water levels.

“We have seen how quickly the rivers have risen,” he said.

Despite that, there was a sense NSW had escaped the worst flooding predictions.

Some 130,000 homes in the path of a spilling Warragamba Dam in the Hawkesbury-Nepean region in western Sydney got a reprieve on Thursday afternoon after being told any flooding was likely to be less than the levels seen in March 2021.

A forecast for 600 gigalitres of water to spill over the dam wall daily has been been revised down to between 300 gigalitres and 350 gigalitres.

“We have dodged a bit of a bullet with the rain, but there is still a lot of danger in this catchment,” Mr Ayres told the Nine Network on Friday.

“This has been a very close run thing, this could have been a catastrophic disaster.”

Further north, the Richmond River delivered major flooding at Coraki, Bungawalbyn and Woodburn on Thursday, with peaks near the record March 1974 flood level, but Casino and Kyogle fell back below the minor flood level.

The NSW SES responded to more than 2500 requests for assistance and conducted 144 flood rescues in the 24 hours to 5pm on Thursday.

“We have a great emphasis at the moment on trying to clear those areas that are safe and let you get back,” she said..

“But obviously from those high levels of water rushing down rivers across the whole of the Northern Rivers, Central Coast, and metropolitan area, it’s still dangerous out there.”

While the low pressure system that brought hundreds of millimetres of rain and devastating flooding to multiple areas in Queensland and NSW in the past week is due to ease on Friday, more severe weather could be on the way this weekend.

Another cold front on the way from Victoria will bring more rain and severe weather on Saturday, the BOM said. That could make rivers rise again.

The death toll from the NSW floods event remains at five, including four fatalities in the north-western town of Lismore.

The price hikes Telstra will roll out on July 1
‘Should not have been built’: Ever more frequent flooding disasters require urgent answers
Today's Stories

‘Lots of danger’ as more evacuations ordered in Sydney