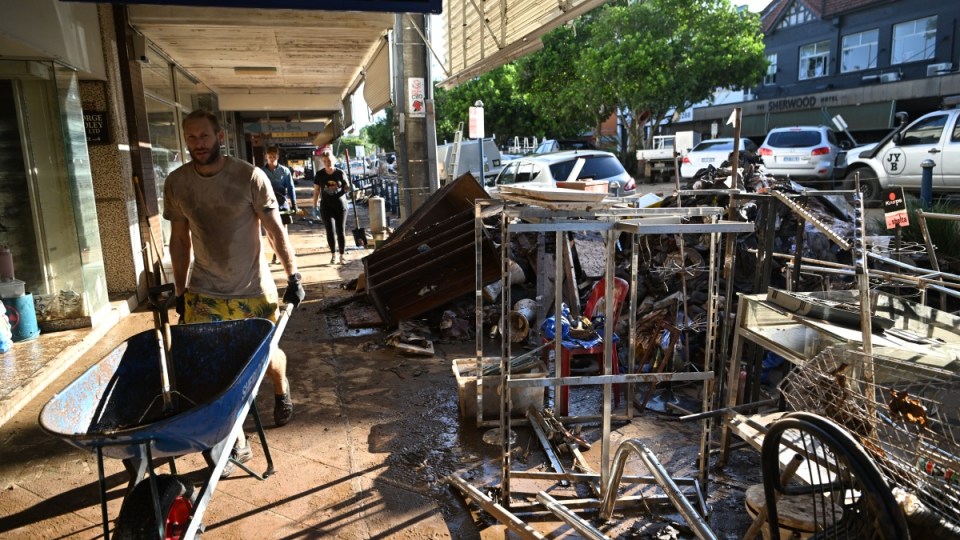 The clean-up has begun in flood-hit Lismore, but there are new fears about a lack of food and fuel supplies. Photo: Getty

Thousands of residents of flood-battered towns in NSW and Queensland face a new crisis, with food and fuel shortages emerging across a wide area.

Petrol stations are running out of fuel and supermarket shelves remain empty across the northern rivers and south-eastern Queensland.

There are also reports of ATMs running out of cash and repeated breakdowns in telephone and internet coverage.

The dire shortages are expected to last for at least several more days, even as floodwaters in the stricken towns and cities begin to recede.

Major supermarkets in the flood zones have imposed purchase limits on staples such as toilet paper, meat and some medicines. Some have warned it could be well into next week before supplies are replenished.

Ms Andrews told Sky News on Thursday the critical days would be until the weekend, but issues still would not be fully resolved then.

“The critical time is now through until Sunday but we will continue to monitor beyond that,” she said.

“We will do what we can to make sure emergency supplies are getting through, people are being rescued from any danger that they are in.”

About 900 Australian Defence Force personnel are already on the ground as part of flood rescue and assistance measures.

“Our supermarket shelves are stripped bare. We don’t have anything. They were hoping some freight line also open up today because food is non-existent and also fuel supplies. We desperately need that,” she told ABC TV on Thursday.

“We were very lucky to got a service station that keeps some fuel for emergency situations.”

The crisis emerged as emergency crews in northern NSW continued the painful process of checking thousands of homes for missing people after Lismore’s worst flood crisis on record.

As the waters began to subside, two women in their 80s and a man in his 70s were discovered dead in their flooded homes, and the body of another man was found floating in a Lismore street.

Police are still working out how many people are missing and Mr Baxter said “some people just haven’t been heard from”.

Communications remain difficult in Lismore and many people who are unaccounted for may simply have been unable to make contact.

The next step involves emergency workers going house to house and speaking with locals in hard-hit areas to try to find people who have not made contact since the deluge.

“We are talking literally thousands of homes,” Mr Baxter said.

The task ahead was “epic”, and now included crews from the State Emergency Service, the Rural Fire Service, Resilience NSW and the Australian Defence Force, he said.

“This is a big disaster and it’s over such a widespread area. It’s going to be hard work.”

Lismore Mayor Steve Krieg said the NSW and federal governments needed to listen to residents, after countless homes and business were ruined as the city was inundated.

“There are plans that have been in place for many, many years to mitigate the flood levels in Lismore,” Mr Krieg said on Thursday.

The cafe owner is one of many who returned to a ruined business after the deluge subsided this week, and said the clean-up was a daunting and disgusting task.

“The smell obviously is the worst thing,” Mr Krieg told the Nine Network.

“We’ve got no power, so our coolrooms, our freezers have all been off for three or four days now and the smell is something that really does hit you, but I mean it’s just heartbreaking.”

He thought he had “done everything right to prepare for this one” but the ceiling of the building had collapsed.

“To know that there’s been over 10 feet (three metres) of water through your place – what do you do?”

Mr Krieg took “half an hour” to take in the devastation of his own business on Thursday before putting on a different hat, and becoming the city’s mayor again.

“I’m just one of many, many thousands of people and there are hearts broken like mine all over this city.”

Up to 100 people were trapped on the roofs of their houses waiting hours for help.

On Thursday, the clean-up of the mud-covered city continued as people assessed the damage and counted the losses of homes and businesses.

“Many people today in the Northern Rivers and over the last 24 hours have returned home, and they are returning home to heartbreaking scenes,” NSW Premier Dominic Perrottet said.

ADF helicopters were being used to drop critical food supplies to evacuation centres and isolated properties.

“The challenge is going to be enormous,” Emergency Services Minister Steph Cooke said, pointing to issues around disposing of massive amounts of household waste.

The road to recovery would be “very, very long”.