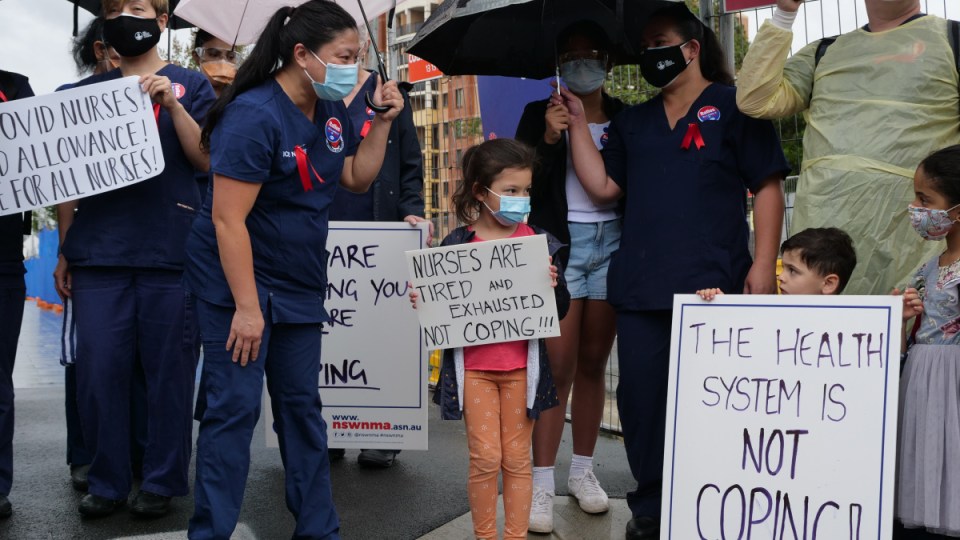 Nurses in NSW will take their strike action to state parliament on Tuesday. Photo: AAP

There are 8201 more COVID-19 cases in NSW and another 16 deaths, as striking nurses prepare to march on state parliament.

That is 2017 more cases of the virus than reported on Monday, and two more deaths.

Hospitalisations dropped slightly overnight by 66 to 1583, while there are 96 people in intensive care – four fewer than reported by NSW Health on Monday.

About 48.5 per cent of eligible people in NSW have received booster shots.

Meanwhile, nurses in about 150 NSW public hospitals are striking for the first time in nearly a decade.

A skeleton staff will remain at hospitals on Tuesday to ensure patient safety.

Thousands of nurses will rally outside NSW Parliament House to take their message to MPs as they return to Macquarie Street for the first sitting day of the year.

NSW Nurses and Midwives Association General Secretary Brett Holmes said nurses had made the “difficult” decision to strike because they were stretched to the limit.

“They want significant change to occur and they need it to start happening now,” he said.

Nurses want one nurse to every four patients on every shift and a pay increase above the government’s prescribed public sector offer of 2.5 per cent.

Health Minister Brad Hazzard said he was disappointed the strike was going ahead, saying the changes nurses demand would cost the state about $1 billion to implement.