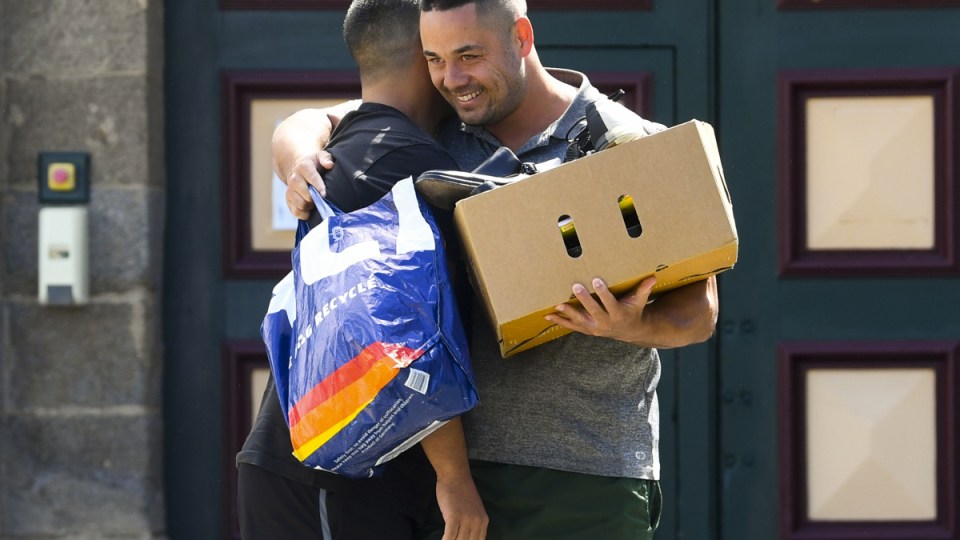 Nine months after he was jailed on rape charges, former NRL star Jarryd Hayne has walked free from prison, his convictions quashed.

Hayne was granted bail in the Downing Centre District Court on Tuesday, which was also his 34th birthday.

It came a day after a NSW appeal court overturned his convictions and ordered a third trial.

Earlier, Hayne had appeared by audio visual link from the jail, clad in prison greens, as the judge imposed conditions on his release.

He must pay a $20,000 bail surety within seven days, must surrender his passport, and report to police three times a week, in bail conditions agreed upon by his lawyer and the prosecutors. He must also live with his wife while on bail.

Hayne is barred from contacting or intimidating the alleged victim or any witnesses, and cannot enter the Newcastle local government area.

Last May, Hayne was sentenced to five years and nine months behind bars – with a non-parole period of three years and eight months – after he was found guilty of two charges of sexual assault without consent.

The Crown contended in both trials he forcibly performed oral and digital sexual intercourse on a woman in her NSW Hunter bedroom on the night of the 2018 NRL grand final.

The alleged assault left her bleeding from her genitalia, they said.

But Hayne’s barrister Tim Game SC successfully argued for his convictions to be overturned on two appeal grounds.

The jury was given legal directions by Justice Helen Syme that were “flawed in almost every possible way”, Mr Game said.

He also succeeded in convincing the appeal court it was an error to reverse a ruling from the first trial in relation to evidence he said explained the complainant’s “abiding interest in having sex with Jarryd Hayne”.

Another two appeal grounds – including that the jury’s verdict was unreasonable – were dismissed.

The matter will return to court on Friday, to fix a date for the third trial, which is expected to last two to three weeks.

The earliest a trial of that length might be able to proceed was October, District Court judge Christopher O’Brien said.

‘Australia votes for climate action’: How the world framed Labor’s victory as a win for the planet
NSW has 8201 virus cases, 16 deaths
Today's Stories