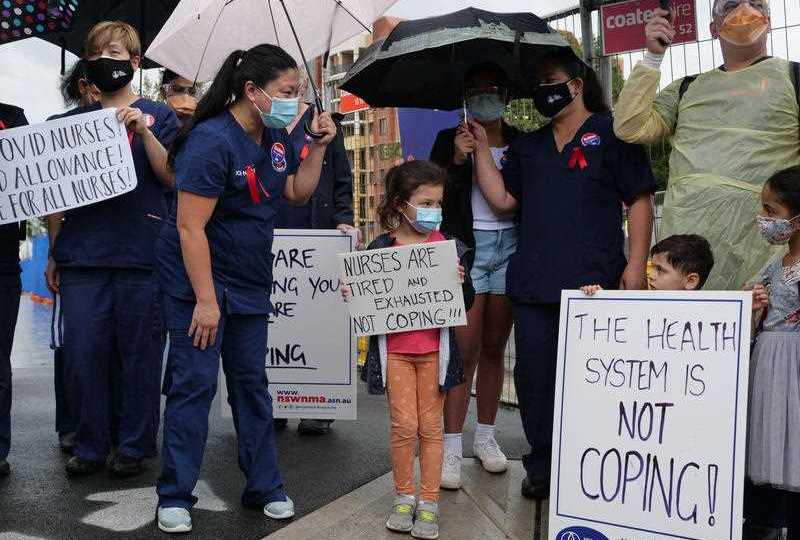 Thousands of NSW nurses will walk off the job in the first such strike in a decade. Photo: AAP

The NSW Premier says the state is heading in the right direction as it reports another 6184 COVID cases and a further 14 deaths.

Monday’s daily tally of new infections was down 502 from Sunday, and there were eight fewer deaths.

Hospitalisations for COVID in NSW rose slightly overnight to 1649, with 100 people in intensive care.

Premier Dominic Perrottet said the state was in a “strong position” in the pandemic but was in the middle of a “transition”.

“If you take a step back and look at the hospitalisations and ICU presentations, things are certainly heading in the right direction,” Mr Perrottet said on Sunday.

More than 95 per cent of people aged 16 and over in NSW have received a first dose of a COVID-19 vaccine, while 94.2 per cent are double-vaccinated.

About 48.3 per cent of people have received a booster shot.

Meanwhile, nurses in public hospitals will strike this week for the first time in a decade.

Skeleton staff will maintain patient care while most nurses walk off the job, calling for minimum staff-to-patient ratios and better pay.

Mr Perrottet said his government was “working through” issues with the NSW Nurses and Midwives Association.

“If he doesn’t listen there will be tens of thousands of nurses who are considering their future,” the union’s general secretary Brett Holmes told Sydney radio 2GB on Monday.

‘I was very respectful’: Jason Momoa apologises after taking photos in the Sistine Chapel
NSW stresses getting boosted as COVID claims a further 22 lives
Today's Stories