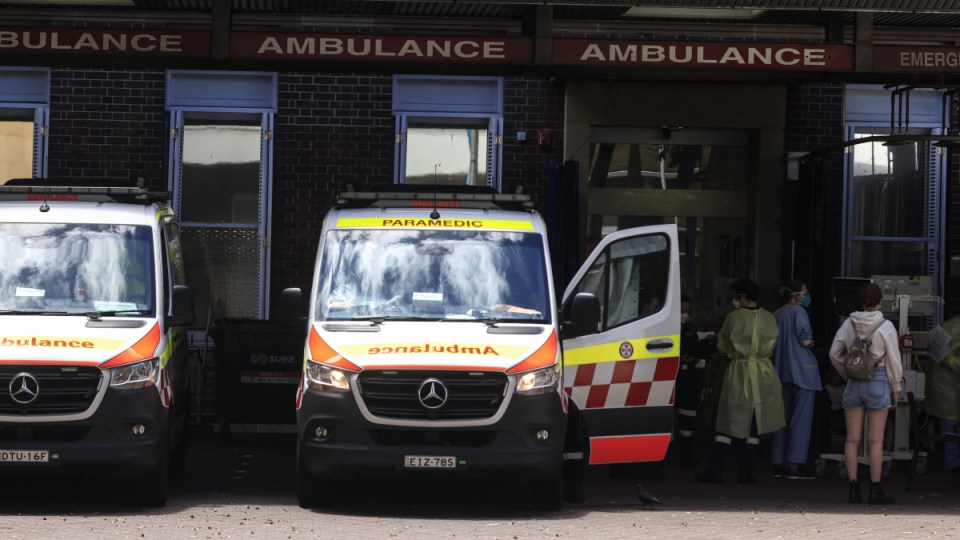 The number of people in hospital with the virus in NSW is closing in on 3000, after a jump overnight. Photo: Getty

Mask rules and hospitality density limits will remain in NSW after the state’s COVID-19 cases, deaths and hospitalisations all jumped again.

But mask rules and hospitality density limits reintroduced before Christmas to pump the brakes on Omicron’s spread will continue beyond January 27.

“The restrictions we put in place last year … will be rolling over for another month,” Mr Perrottet said on Tuesday.

NSW Health reports there are 2943 virus patients in NSW hospitals, up by 127, and 183 people in ICU, 13 down on the previous day. It is the highest number of people in hospital with the virus the state has yet recorded.

More than 33 per cent of eligible people in NSW have had three doses of a COVID-19 vaccine.

Mr Perrottet promised businesses reeling from the effects of the Omicron wave of COVID will get fresh support within a week.

Treasurer Matt Kean was working with stakeholder groups and industry “to make sure the support that we provide … during this period has impact”, Mr Perrottet told Sydney radio 2GB.

“Our focus … has always been to put businesses and workers before the budget … and we will continue to do that.”

He also promised non-urgent elective surgery would resume as soon as possible. An Australian Institute of Health and Welfare report has found the median wait time for procedures blew out to 48 days in the 2020/21 financial year, an increase of nine days compared to the previous year.

The NSW government would commit funding to clear the surgery backlog when the pressure had eased on NSW public hospitals, Mr Perrottet said.

“As soon as we … get advice from our medical teams that we can bring that non-urgent elective surgery back we will do so.

“It’s a key focus of ours … that we would get that back on track as quickly as possible,” he said.

He also welcomed news from the World Health Organisation that the global health COVID-19 health emergency could end this year if 70 per cent of the world”s population gets vaccinated.

“There’s a long way to go but I think that there’s no doubt that these signs … that are coming out of the WHO and global evidence is incredibly pleasing,” he said.

Victoria’s hospital patient numbers jumped by 59 to 1057 on Tuesday, after falling slightly in recent days.

There remain 119 people in intensive care, with 45 of those on a ventilator.

A first system-wide “code brown” declaration was enacted in Melbourne hospitals and six regional ones last week, with experts forecasting up to 2500 virus patients by early February.

It was slated to last up to six weeks.

Victorian health services deputy controller Adam Horsburgh said there had since been a drop in triple-zero calls and emergency presentations.

The number of healthcare staff forced into the isolation as confirmed virus cases or close contacts has also fallen from more than 4000, to about 3500 on any given day.

“While the number of admissions and staff availability have either remained stable or improved slightly over the past seven days, the system is still under enormous strain,” Mr Horsburgh, who is also Austin Health chief executive, said on Tuesday.

“Therefore, we do think that the code brown setting is still the appropriate response at this point in time.”

One in five calls to triple zero were still not for emergencies and Mr Horsburgh said many people with COVID often rang or went to hospitals because they didn’t know how to access advice or support.

To help more Victorians with mild COVID symptoms recover from home, the state government is launching a new advertising campaign to run on TV, radio and social media platforms.

“For those who are experiencing severe symptoms, the campaign explains what to look for,” Health Minister Martin Foley said.

Also on Tuesday, Victoria had its highest daily COVID-19 death toll since its second wave.

Mr Foley said 12 of the fatalities were people who died in the previous two days.

The deaths are the highest confirmed in a single day since September 4, 2020, when Victoria posted 59 fatalities during Melbourne’s 112-day lockdown.

The grim result came two years to the day since the first case of COVID-19, then known as the novel coronavirus, was announced in Australia.

There have since been more than 775,000 infections reported in Victoria, roughly 550,000 of which have come in the past three weeks as the Omicron variant runs rampant.