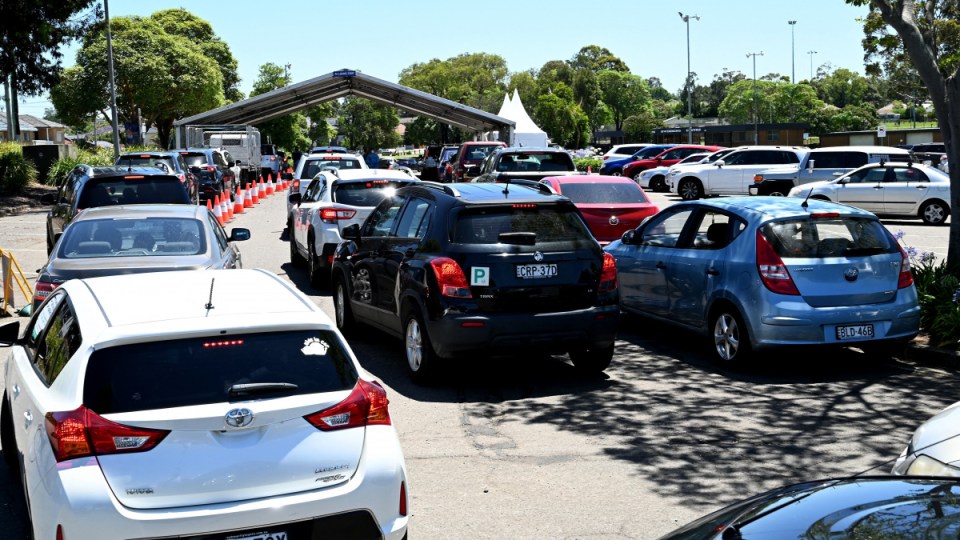 There have been long queues for PCR tests across NSW this week. Photo: Getty

The number of new COVID-19 infections in NSW has dropped slightly to 5612, as the mandate on wearing masks indoors resumes.

The cases were diagnosed from more than 164,000 tests in the 24 hours to 8pm on Thursday and represent a decrease of 103 from Wednesday’s record tally.

One death was also reported on Friday.

The number of virus patients in hospital in NSW has climbed to 382, up 35. They include 53 in intensive care, an increase of eight.

NSW is battling by far its most widespread outbreak, spurred on by the highly transmissible Omicron variant, forcing NSW to scale back contact tracing efforts.

Just over one in two – 54 per cent – of people who test positive were fully interviewed by health bureaucrats within a day last week.

The week prior, that figure stood at 94 per cent.

To help NSW Health direct resources to the most vulnerable or high risk cases, people who test positive will get a text message asking them to fill out an online questionnaire.

About four in five people were filling them out, NSW chief health officer Kerry Chant said on Thursday.

Those who are contacted only by text are asked to let their contacts know about their diagnosis, a task that used to be performed by bureaucrats.

Only those who work at or have visited a high-risk setting such as a disability group home, Aboriginal community or jail will get a phone call from NSW Health.

The spike has also prompted the government to reintroduce some restrictions that were wound back less than two weeks ago. Across NSW, thousands of people are in isolation are being considered close contacts of people who have the virus – including up to 1500 health workers and many hospitality and retail staff.

“We believe the changes … will ensure that our health system is well manned over the holiday season as we go through this next stage,” he said on Thursday.

“Our No.1 priority is to keep people safe.

“We continue to open up the economy safely and are incredibly confident that NSW and our great people have made enormous efforts and sacrifices over this period of time.”

With COVID testing queues swelling across the state this week, Mr Perrottet also urged those who don’t have symptoms to avoid getting PCR tested – even if they are pinged through the QR code system.

He estimated 20 per cent of this week’s tests were for people who needed them to travel interstate – many of whom had no symptoms.

“If you aren’t feeling unwell, please do not get a PCR test. You’re taking the place and extending the queue for someone who is unwell and sick at this time. We need to get those tests back as quickly as possible,” he said.

He has flagged free rapid antigen tests for NSW residents will be introduced in 2022. Details on how that program will run are yet to be outlined.

In other moves announced on Thursday, hospitality venues will return to the one person per two-square metre rule and QR codes will again be compulsory in all settings from December 27.

The restrictions will last at least a month.

How the sale of a property can affect your pension payments
NSW backflips: Mandatory masks, density limits amid record virus spike
Today's Stories