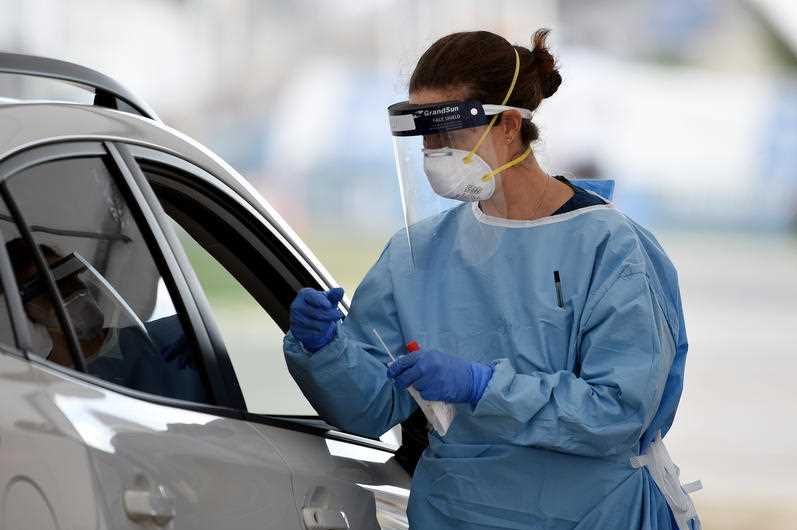 There are reports of a case on the Omicron COVID variant on the central coast of NSW. Photo: AAP

A fifth possible case of the Omicron COVID strain is being investigated in NSW – this time in a woman in her 30s who spent some time in the community on the central coast.

It has listed exposure sites in Sydney and on the central coast as a result. Anyone at the same venue at the same time is a considered a casual contact and must get tested and isolate until they get a negative test result.

“This particular lady came in before the new arrangements, that is transferring to a health hotel, so she has been out in the community and health is now investigating that,” NSW Health Minister Brad Hazzard told Seven on Tuesday.

“She has essentially been out in the central coast area.”

Sites of concern include several outlets at Westfield Parramatta, Coles at Top Ryde Shopping Centre, takeaway outlets in North Wyong, Woolworths at Wadalba and Aldi in Toukley. Dates and times of concern range from last Friday morning to Saturday afternoon.

NSW Health said the woman, who is fully vaccinated, arrived in Sydney on flight QR908 from Doha on November 25. She travelled by private car to the central coast.

Everyone on the flight is considered a close contact and must get tested for the virus immediately and isolate for 14 days, regardless of their vaccination status.

NSW Health has ruled out a possible sixth infection. That person, who lives in Broken Hill, arrived on the same flight but is considered unlikely to have the Omicron variant.

There are already four other confirmed cases of the variant in travellers to NSW, with the state on high alert for further infections.

NSW had 179 virus cases and three deaths on Tuesday. The deaths were its first after four consecutive days without COVID fatalities.

The only other confirmed case of the variant in Australia so far is a traveller on a repatriation flight to the Northern Territory. He is in quarantine at Howard Springs.

In Canberra on Tuesday, chief medical officer Paul Kelly said more cases of the worrying variant would inevitably be detected in Australia.

“We cannot keep this Omicron variant out forever from Australia. Eventually it will be here,” he said.

“Most importantly now, we do what we can to slow down that introduction and all of the measures that have been introduced will assist with that.”

The federal government hopes Australia can continue reopening to the world after a two-week pause as authorities mull bringing booster shots forward to help deal with the emerging variant.

International students and visa holders will not be able to return to Australia from Wednesday as originally planned because of the spread of the variant.

That date has been pushed out to December 15, alongside a pause on travel bubbles with Japan and South Korea.

“Our overwhelming view is that whilst it’s an emerging variant, it’s a manageable variant,” Health Minister Greg Hunt said on Tuesday.

“All of this is done on the presumption that we will recommence from December 15, but medical advice will guide our decision making throughout.”

The Australian Technical Advisory Group on Immunisation is looking at whether to recommend booster COVID-19 shots sooner.

They are currently recommended for six months after a second vaccine dose.

“That process has started. Certainly we haven’t received any advice,” Mr Hunt said.

Final approval is also pending on vaccines for children aged between five and 11.

“At this stage, there are no red flags and we’re expecting that to occur in the coming weeks,” Mr Hunt said.

“The guidance that we’ve set on the basis of ATAGI advice is that we would begin that in early January.”

On Tuesday afternoon, federal, state and territory leaders will discuss quarantine arrangements to deal with the variant.

“We will be working to ensure that we will open our borders as soon as we possibly can,” Home Affairs Minister Karen Andrews said.

Nearly 87 per cent of Australians aged 16 and older are fully vaccinated.

Russian Google to file for bankruptcy