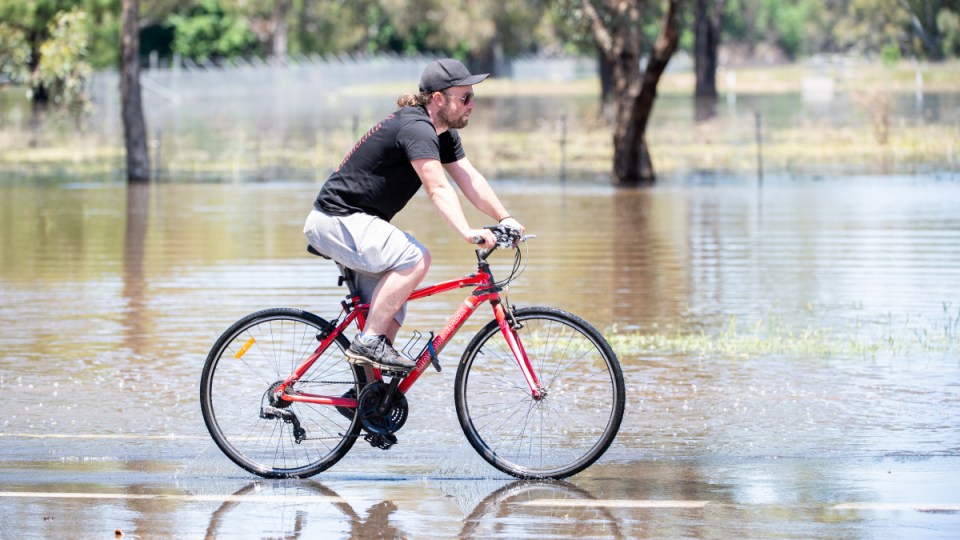 Floodwaters are subsiding in the Lachlan River at Forbes. Photo: AAP

The weather bureau is warning of more storms and high rainfall as low pressure system that impacted southern and western NSW is expected to push further east.

NSW has been experiencing widespread flooding as extended heavy rain falls in areas where the ground is already saturated and rivers high in many areas and flooding in others.

Australia is on track for its wettest spring in a decade and some regions in NSW have already received more than three times their normal rainfall for November.

On Friday morning, the bureau issued an alert for severe thunderstorms, damaging winds and heavy rainfall in Newcastle, the Hunter, Central Coast, the Blue Mountains and Hawkesbury.

On Thursday some areas in the south of the state copped a drenching, with a portable rain station south of Griffith measuring 60mm in an hour.

Snowball, south east of Canberra, recorded 28mm in an hour and Braidwood recorded 15mm in 30 minutes.

Gunnedah recorded more than 20mm in 90 minutes and a similar amount fell at Gunnedah over a two hour period.

Areas including Coombah, Hay, Wilcannia, Broken Hill, Ivanhoe, Menindee and Balranald were in the path of a “complex low pressure system” that moved across the lower part of the state on Thursday.

Severe thunderstorms also prompted concern around the state, looming over the south coast and southern tablelands on Thursday afternoon as well as threatening in west NSW near Wilcannia.

All Forbes residents have now been given the all clear to return home after the Lachlan River fell below minor flood levels.

During the height of floods in Forbes earlier this month, close to 2000 residents were ordered to evacuate and the river peaked at 10.54 metres, above major flood levels but below the peak during previous flooding in 2016.

NSW Farmers Association has called for a statewide natural disaster declaration so relief funds can be accessed as farmers watch paddocks go underwater and their crops destroyed after so many years of drought conditions.

Weather bureau head of operational climate services Andrew Watkins says the summer outlook for NSW is wet, with temperatures cooler than usual on the coast and warmer than usual in the state’s west.

Daily minimum temperatures are expected to be higher than normal as increased cloud traps hot air, leading to warmer nights.