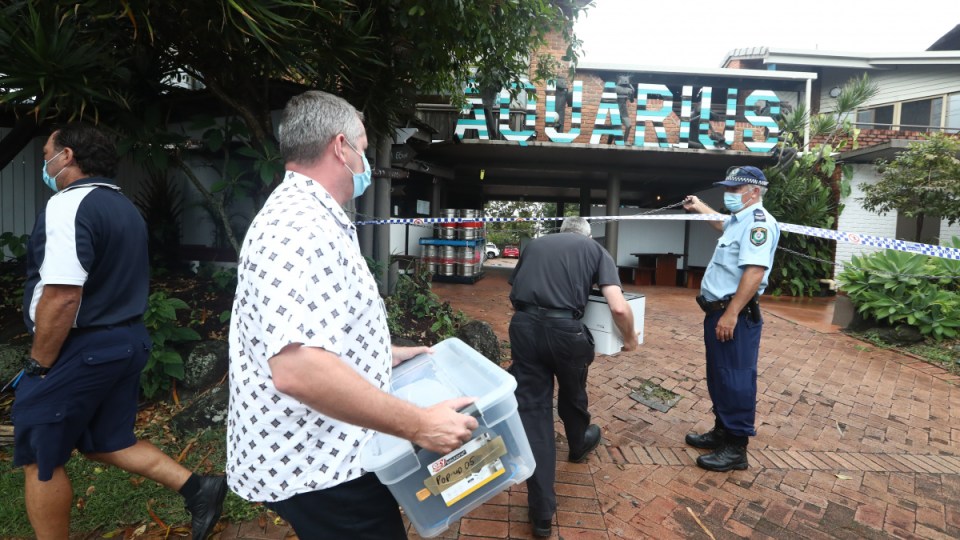 Supplies are brought into the Aquarius Backpackers, where more than 80 people are in lockdown. Photo: AAP

More than 80 backpackers at a Byron Bay hostel face a week locked down as a potential outbreak in the schoolies hub threatens to ruin graduation celebrations.

NSW Health sent the Aquarius Backpackers in the northern NSW town into lockdown on Thursday after identifying a positive case and 84 close contacts.

The positive case was a young woman from Victoria who was a guest at the hostel. The Nine newspapers are reporting she was unvaccinated.

No guests will be able to leave the Aquarius Backpackers in Byron Bay for seven days. Police will guard the hostel around the clock to ensure compliance.

One guest said he was worried he might catch the virus.

“I don’t want it, it’s pretty scary, pretty serious,” a Melbourne man told the ABC from his hostel balcony.

Another guest, from North Queensland, said the person with COVID-19 was an employee.

“She has probably been in every room,” he said.

Some 80.9 per cent of residents in the Byron Bay local government area are fully vaccinated. But the region’s coverage lags the NSW average.

Despite that, NSW Police detective chief inspector Matt Kehoe brushed off concerns the situation could affect schoolies celebrations, saying none of the people locked down had so far been identified as schoolies.

“Between [NSW] Health and ourselves, we’re very comfortable with the planning we’ve put in place and the Aquarius matter is being managed by Health and we’re supporting them,” he said.

NSW Health is providing food for the 84 guests at Aquarius Backpackers, and might relocate some of those isolating, he said.

“Obviously nobody really wants to be locked down but they’re all in good spirits at present,” he said.

Detective Chief Inspector Kehoe said NSW Police would not be complacent about the risk of an outbreak.

“We do know that COVID is still within our communities, and it’s all around the country,” he said.

NSW had another 276 local COVID cases and no new deaths on Thursday. It had 248 cases on Wednesday.

In Victoria, there were 1254 infections and five deaths as the state reached its long-awaited target of 90 per cent of people over 12 fully vaccinated.