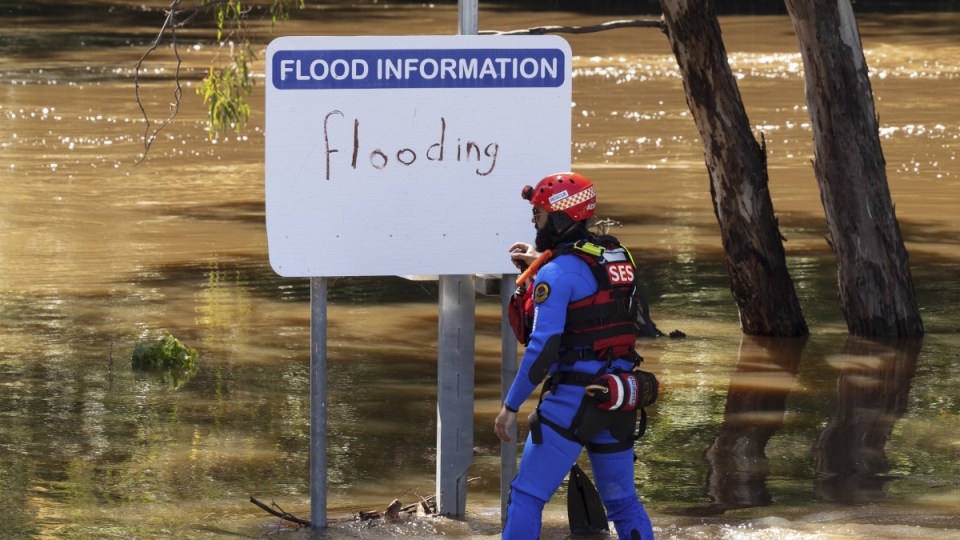 A NSW police officer who rescued two boys from a flood-affected river will be recommended for a bravery award while wet weather continues to batter much of the state.

Emergency services were called to the Lachlan River in Condobolin on Saturday afternoon after two 11-year-old boys jumped in.

They were swept 60 metres away by the fast-moving current, made worse by the flood level – which the Bureau of Meteorology warns will worsen by next weekend.

They were rescued by a police officer who swam out to them with a flotation device.

There are warnings of more to come from the severe storms that have hit parts of northern NSW, delivering damaging winds and more heavy rain to saturated catchments.

There is a gale warning for the Hunter Coast for Monday and strong wind warnings for the Sydney and Macquarie coasts.

On Sunday, a woman died after after a tree branch fell on her while she was bushwalking in the Lake Macquarie area.

Emergency services responded to reports of the woman being struck by a falling tree branch in the Watagans National Park at Cooranbong, near Lake Macquarie on the Central Coast about 6.30pm on Sunday.

Despite the efforts of relatives and first responders, the woman, believed to be aged in her 30s, was unable to be revived.

The bureau has predicted an inland low pressure system from the Northern Territory will spread rain across the mid-north coast, Hunter region and the central north on Monday, causing minor flooding across inland rivers.

There are heavy rainfall warnings in place for the Central West Slopes and Plains, northern parts of the Hunter region and on the mid-north coast.

On Saturday night those storms reached the coast at Grafton bringing damaging winds and large hailstones.

Twenty millimetres of rain fell in an hour south of Grafton and at Port Macquarie on Saturday night.

Crawney Mountain, south of Tamworth, received 19mm in an hour, while gusts of 105km/h were recorded at Moree airport on Saturday.

Minor to moderate flooding is predicted on the Belubula and Bell rivers at Orange and Molong, while minor flooding is also set to impact parts of the Upper Macintyre, Gwydir, Peel, Castlereagh and Macquarie rivers.

Residents in Forbes in the state’s central west were evacuated and farmers in the surrounding areas are counting the cost of lost crops.