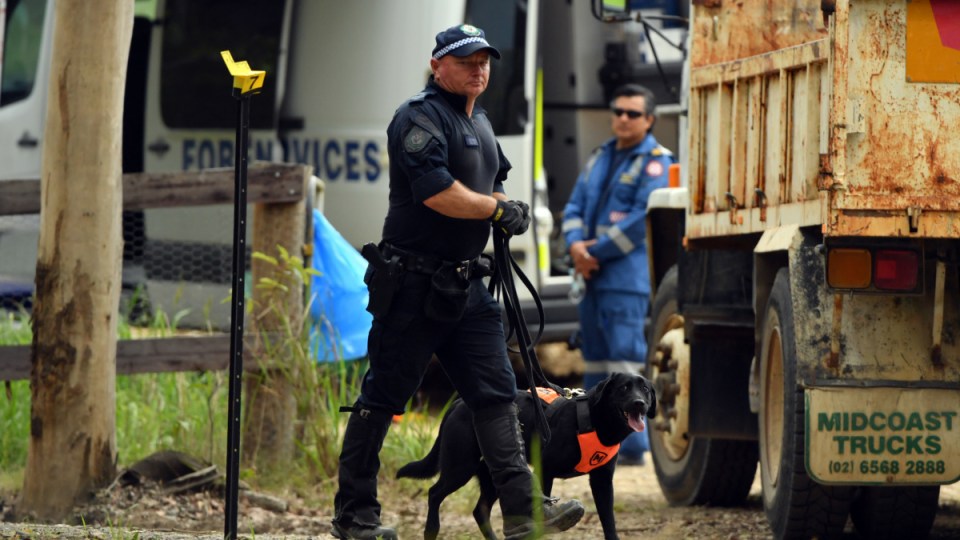 A police cadaver dog in bush a kilometre from the former home of William Tyrrell’s foster grandmother in Kendall on Wednesday. Photo: AAP

William Tyrrell’s foster parents have been charged over the alleged assault of a different child, as police probe for holes in the initial reports about William’s 2014 disappearance.

Seven years on from the disappearance, the team of detectives is now again going back over the stories they were told about the day William was last seen – as fresh evidence has officers focusing on the foster family.

They have already seized a car previously belonging to the foster grandmother, who died earlier this year.

The ABC reports on Thursday morning that detectives are considering the theory that the car may have been used to transport William’s body from the Kendall home.

The grey Mazda was seized at a home in Gymea, in Sydney’s south, under a coronial order last week. The vehicle is undergoing extensive forensic examination, which could take weeks.

Earlier this week police returned to the property and nearby bushland, searching for remains as they honed in on a person of interest.

While the search continued for a third day on Wednesday, officers delivered court attendance notices to the boy’s former foster parents.

NSW Police allege they assaulted a different child at a home on Sydney’s upper north shore.

The 56-year-old woman and a 54-year-old man have both been charged with common assault and are due to face Hornsby Local Court on Tuesday.

As the search for William continued, NSW Premier Dominic Perrottet hoped for a breakthrough.

The signs and reporting coming from the police investigation were “very encouraging” and police were doing a “phenomenal” job, the premier said.

“I can speak on behalf of everyone across our state who has been heartbroken by this entire story that we [hope to] have a breakthrough as soon as possible,” he said.

Mr Perrottet made his comments after police revealed they had seized a car linked to the case as part of their investigation.

On Wednesday, search teams turned their attention to an area of bushland about a kilometre from the house where William was last seen, after digging up patches of garden at the home on Tuesday.

Officers used an excavator to remove a layer of topsoil.

There was a moment of excitement when an item was found on Wednesday afternoon, but it turned out to be nothing.

Rural Fire Service volunteers have been helping to clear bushland and vegetation at the site, and Australian Federal Police officers were present with ground-penetrating radar and 3D cameras.

“Police will not stop until such time as we’ve investigated every possible lead,” he told reporters.

Asked if police were investigating whether William died after falling from a balcony at the house, Police Minister David Elliott said every option was being considered.

“With a mysterious incident like this, every single option has to be investigated, every scenario has to be reviewed and tested,” he said.

“Let’s hope whatever the conclusion is, (it) gives closure to the families and community.”

Police Commissioner Mick Fuller has confirmed there has been a significant breakthrough in the case, saying he was confident police would solve the mystery of what happened to William.

“There is certainly one person in particular that we are looking closely at,” he said.

Triple the romance: Can casting three men in The Bachelor breathe new life into the franchise?
Some residents cleared to return home as Forbes flood threat eases
Today's Stories