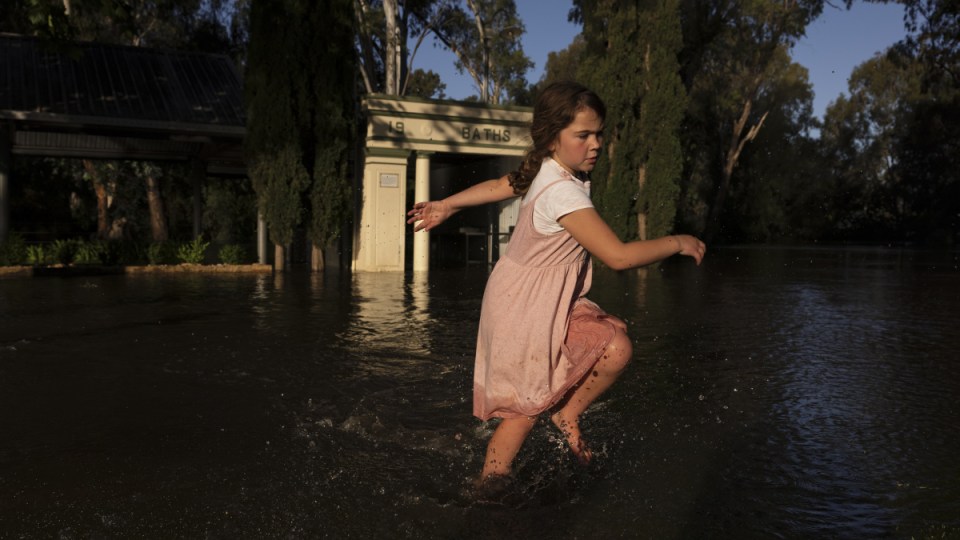 Alexandria plays in the rising waters of the Lachlan River at Forbes. Photo: Getty

Flooding is expected in the NSW central western town of Forbes after hundreds of people spent an anxious night evacuated from their homes, as slow-moving floodwaters continue to rise.

The Lachlan River peaked at 10.75 metres overnight, with low-lying areas of the town expected to flood on Wednesday afternoon.

Emergency Services Minister David Elliott said 275 SES volunteers were stationed in the vicinity and he was “delighted” there had been no flood rescues overnight.

However, he warned people to stay on high alert for rising floodwaters and alert to closed roads.

“It can be many many days before some of these flood waters actually make their way to their final resting place,” he said.

Forbes Mayor Phyllis Miller says residents had been waiting for the flood for almost a week but waters were rising at “a snail’s pace” and she was concerned people were becoming complacent.

“It’s just a wait and see game. It is awful and people start to get complacent because …. there [are] no signs of flooding and of course, that makes people think that we’re crying wolf,” she told the Nine Network on Wednesday.

“But our river is coming up and it will peak some time today. Every flood is different.

“We’re not sure what that will do inside the town or what will happen with the lake system when that water starts to join up with the river water.”

On Tuesday, 1800 residents were ordered to evacuate by the State Emergency Service, which was concerned the river levels would match or exceed major floods in 2016.

SES Commissioner Carlene York said 800 homes might be flooded, as she pleaded with some reluctant locals to evacuate.

“It’s not unusual for people who have lived in that area and lived through a number of floods to say, ‘it didn’t flood last time, I’ll take the risk and stay’,” she saidon Tuesday.

“But every flooding is different and water flows in different ways.”

An evacuation centre has been set up at St Andrews Presbyterian Church for those unable to get to alternative accommodation with family or friends.

Moderate flooding has already occurred upstream at Cowra, and major flooding at Nanami, where the river peaked at more than 12 metres.

Downstream from Forbes, major flooding is also expected at Cottons Weir and Jemalong from Thursday.

The Macquarie, Paroo, Macintyre, Belubula, and Snowy rivers have also flooded over recent days, after parts of the state copped a month’s worth of rain in days.