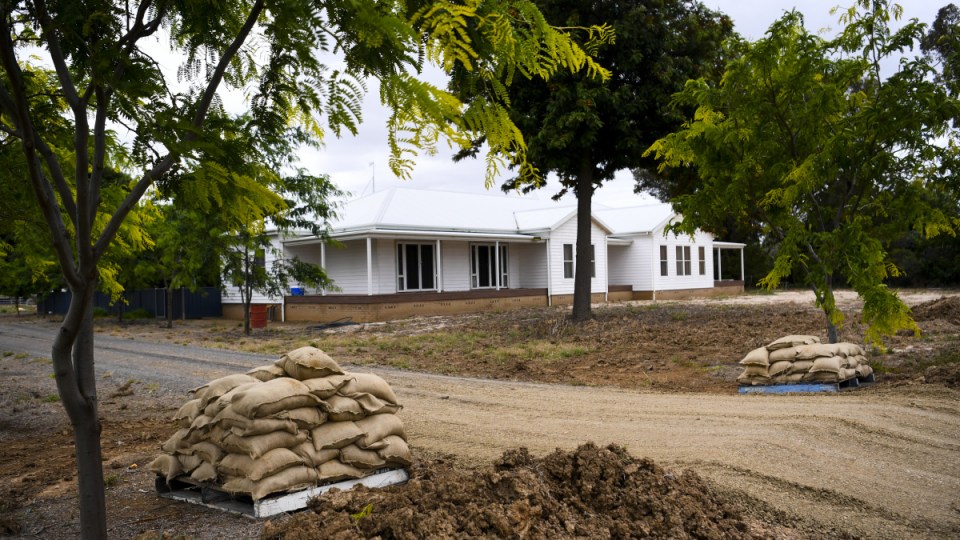 Residents in Forbes have been busy sandbagging ahead of the expected flood peak. Photo: AAP

People in low-lying parts of the NSW central western town of Forbes have been ordered to evacuate ahead of major flooding that’s predicted to inundate the district within hours.

The evacuation order was issued by the State Emergency Service at 11.15am on Tuesday, warning residents to evacuate before 9.30pm.

“Floodwaters will progressively close roads and access will be cut so do not delay moving.”

“If you remain in the area you will be trapped and it may be too dangerous for SES to rescue you,” the local SES warned.

SES Commissioner Carlene York said 800 homes were expected to be inundated, with the Lachlan River expected to match or exceed major floods in 2016.

The flood has been slow-moving and is not expected to peak until midnight, but she urged residents to get out early.

An evacuation centre has been set up at St Andrews Presbyterian Church for those unable to get to alternative accommodation with family or friends.

Already the SES has had to conduct more than 35 flood rescues – many unnecessary – putting the lives of volunteers at risk. More are inevitable, with volunteers reporting some people are saying they’ll refuse to leave their homes.

Ms York pleaded with them to change their minds.

“It’s not unusual for people who have lived in that area and lived through a number of floods to say, it didn’t flood last time, I’ll take the risk and stay,” she said.

“But every flooding is different and water flows in different ways.

“I would rather someone move out of their home for a day or two and come back and find everything in place than having to rescue them if the water’s coming up through their home.”

NSW SES deputy zone commander Barry Griffiths said the evacuation order was issued “to try to give the community as much time as they can to evacuate safely and calmly”.

SES and Rural Fire Service volunteers are doorknocking and delivering about 10,000 sandbags to residents as well as helping prepare properties.

“We are confident that the actions we are taking at the moment are suitable enough for the predicted flood event, but it is going to be a bit of a waiting game over the next 24 hours. We need to see what the water actually does,” Mr Griffiths told the Nine Network.

Moderate flooding has occurred upstream at Cowra, and major flooding occurred at Nanami on Monday night, with the river peaking at more than 12.4 metres.

It was too early to tell how high the river would rise when those floodwaters reached Forbes, the Bureau of Meteorology said on Monday, but the SES warned locals in up to 800 homes to prepare to leave before they hit.

Downstream from Forbes, major flooding is also expected at Cottons Weir and Jemalong.

The Macquarie, Paroo, Macintyre, Belubula, and Snowy rivers have also flooded, after parts of the state copped a month’s worth of rain in days.

“Some of those locations (received) even two to three times what you would get in November,” meteorologist Agata Imielska said on Monday.

“Catchments are wet, dams are full. This is exactly what we’ve been talking about for this season, with the elevated flood risk.

“It is a really important time to really be keeping a very close eye on any flood warnings.”