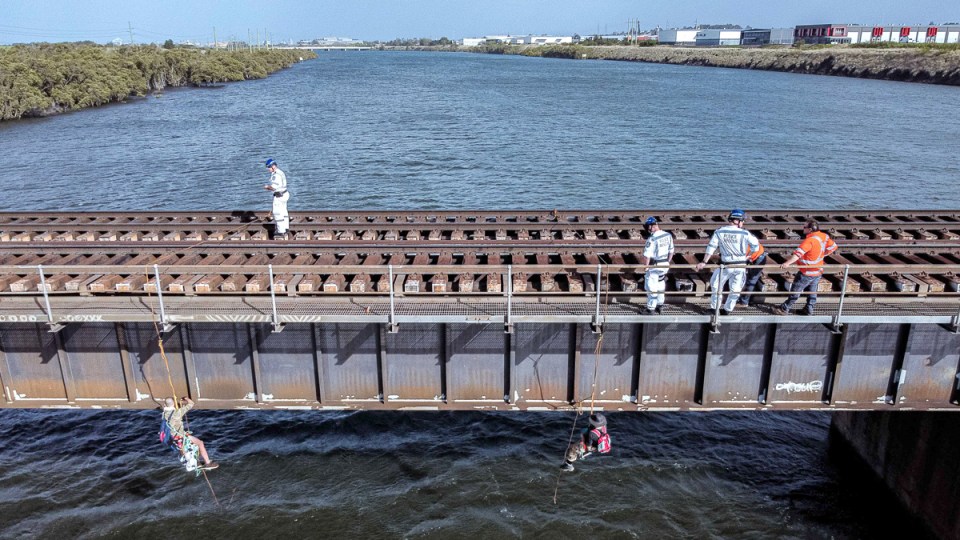 NSW police have launched a strike force targeting anti-coal protesters who have been blocking railways near the world’s largest coal port, threatening them with potential jail sentences up to 25 years.

Commissioner Mick Fuller said the protesters were “coming from other states and territories with particular expertise and they’re locking themselves onto these locomotives and tracks”.

Protesters from Blockade Australia have repeatedly disrupted operations on the rail line around the Port of Newcastle in the past week, with police arresting two women on Monday.

Mr Fuller said “young ladies who were given bail yesterday and walked out of court laughing” would face charges that carry a maximum 25-year sentence.

“These matters will hopefully hold up in court,” he told Sydney radio 2GB on Tuesday.

The NSW Crimes Act says a person who interferes with a railway or locomotive “with the intention of causing the death of, inflicting bodily injury on or endangering the safety of any person who is on the railway” can be jailed for up to 25 years.

Acts with the intention of causing a derailment can result in sentences up to 14 years.

“If you think about the danger that some of these passenger trains on those lines travelling at 160km/h … you could see hundreds of people die,” Mr Fuller said.

“I think those charges are absolutely appropriate and we are looking forward to support from the judiciary to see those people held to account.”

A Blockade Australia spokesperson said “threatening protesters with 25-year prison sentences for blocking coal trains without causing physical harm to anyone is a draconian overreach of police power”.

The organisation said it would “continue to take sustained and disruptive action in response to Australia’s leading role in the climate and ecological crisis for as long as necessary”.

Strike Force Tuohy was established to “actively prevent and disrupt illegal protests” in Newcastle, and police said it would actively patrol and target anyone “engaging in suspicious behaviour”.

Police Minister David Elliott says the government “will not tolerate protesters undermining commuter activities and causing significant damage to these local industries which employ people from across the region”.