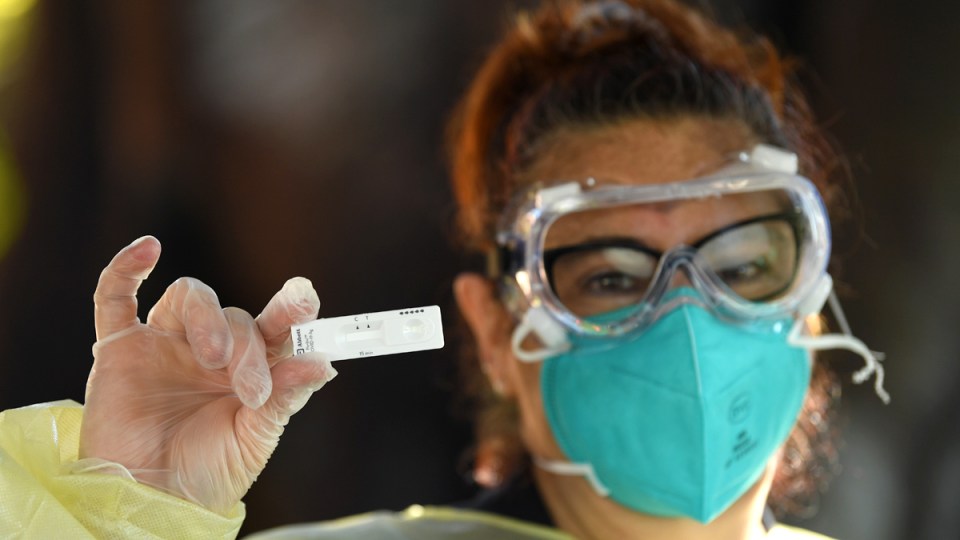 There are 363 people hospitalised in NSW with the virus, 80 of them in intensive care.

There was also one new overseas case detected from the 82,840 tests taken in the 24-hour reporting period to 8pm on Thursday.

Meanwhile, a pilot program for rapid antigen home testing kits in public schools will begin in the town of Albury, near the Victorian border, next week.

“This requires us to deploy every tool available to balance the risk.”

The kits will be handed out by schools for use at home by staff and students, who have to do a test twice a week as part of community surveillance.

They will also be used for close-contact testing to identify positive cases on school sites.

“This is about living with a virus and getting back to normal life while ensuring the community is confident in their safety on school sites,” Ms Mitchell said in a statement.

“Our best line of defence against this pandemic remains vaccinations, and until all students are eligible for one we must continue using measures like [rapid test] kits to keep schools safe.”

However, anyone who gets a positive result will have to get a standard test straight to confirm the result.

Meanwhile, a makeshift vaccination hub at a Sydney stadium where more than 360,000 COVID-19 jabs that administered will soon shut its doors.

The Qudos Bank Arena Vaccination Centre – once a key battleground in the fight against the Delta variant to COVID – will distribute its final doses on Sunday, November 7.

The hub opened on August 9, with workers taking 12 days to set it up as Sydney’s Delta outbreak worsened.

Since then, it has delivered more than half of all vaccine doses in the hard-hit Western Sydney Local Health District.

The area now has some of the highest vaccination rates in the state.

Walk-in Pfizer and AstraZeneca doses will be available until Sunday.

After Sunday, the stadium will return to hosting music concerts and events.

The first event will be a boxing match between Tim Tszyu and Takeshi Inoue on November 17.

The Backstreet Boys, My Chemical Romance, Kings of Leon and Rod Stewart are due to perform in the arena in March.

Some 93.4 per cent of NSW residents over 16 have received at least one vaccine, with 86.5 per cent fully vaccinated.