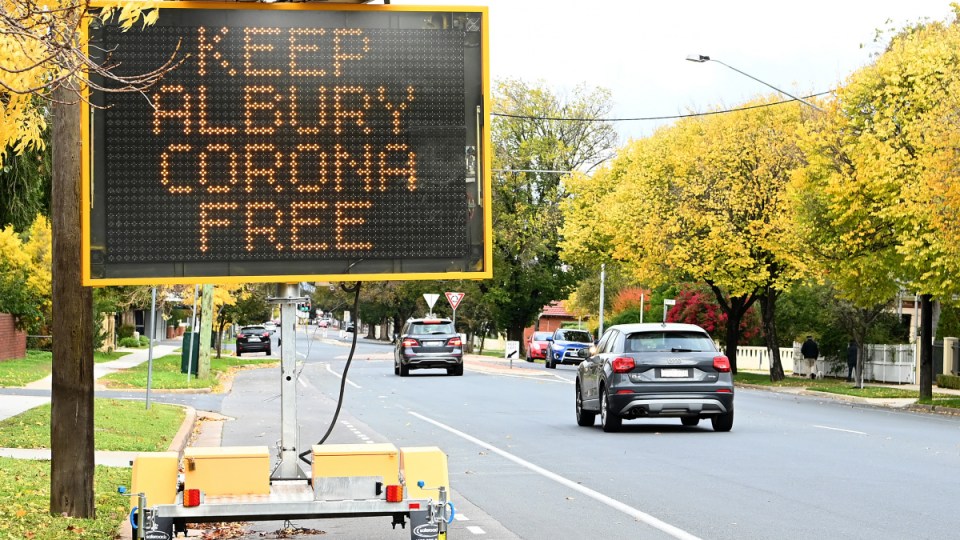 Coronavirus infections are increasing in Albury and surrounding areas on the NSW-Victoria border.

There are another 304 local coronavirus cases in NSW, as concerns grow about fast-tracking plans for travel to the regions.

Wednesday’s update continue the trend of about 300 daily infections across the state since it began reopening more than two weeks ago.

There were also three more deaths, with the COVID toll in NSW since mid-June rising to 506.

The latest figures came as a leading epidemiologist cautioned against allowing unlimited travel across NSW, saying it would be preferable to delay the move for a month to allow regions to boost their vaccination coverage.

The highly anticipated move to unfettered travel to the regions is slated to begin on Monday after being delayed due to lagging vaccination numbers in the regions.

However, Premier Dominic Perrottet has hinted it could happen sooner, saying his COVID economic recovery committee will examine “aspects of the roadmap” this week.

“The vaccination rates have provided an opportunity to revisit some areas and we will look at that,” he said on Tuesday.

Of the NSW residents 16 and over, 93.2 per cent have received one dose of a COVID-19 vaccine and 85.5 per cent of adults are fully vaccinated.

In the 12-15-year-old age group, 78 per cent have had their first dose and 53 per cent are fully vaccinated.

However, UNSW epidemiologist Mary-Louise McLaws has warned against expediting travel to the regions where vaccination rates lag.

“I wouldn’t do so, because 85 per cent is great [but] it’s not universal,” she told the Nine Network on Wednesday.

About 60 regions have less than 85 per cent coverage and 14 of those local government areas have a vaccine uptake of less than 75 per cent, she said.

“It would be sensible to wait for at least four weeks, so that all the regions can get up to 85 per cent and be safe to receive visitors.”

Meanwhile, a COVID-19 outbreak continues to bubble away on the NSW border with Victoria.

The Murrumbidgee Local Health District recorded the second-highest number of cases on Tuesday, accounting for 45 of the state’s 282 infections.

Some 40 of those cases were in the Albury local government area. There is also a rise in cases in Wodonga across the Murray River in Victoria.

The Murrumbidgee district has had 393 cases and two deaths since the start of the Delta outbreak. Of those, 301 were in Albury.

The district’s daily case numbers have exceeded 40 for three consecutive days, after the surge began in earnest in mid-October.

In Albury, vaccination numbers are below the state average – while more than 95 per cent of over-16s have received their first dose, 79.9 per cent were fully vaccinated by Sunday.

That is about five points below the state average.

Another 300 cases in NSW, as regional travel looms