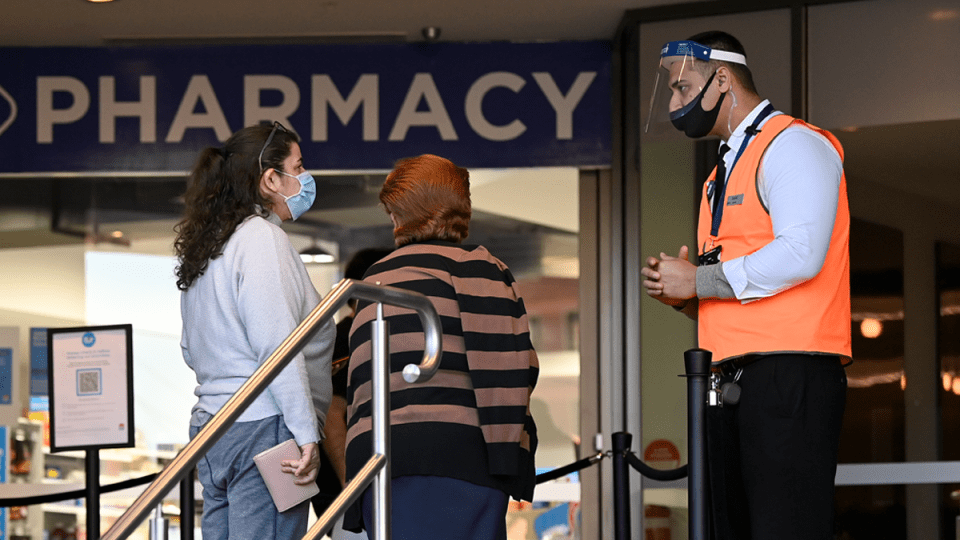 Security guards are more in demand than ever, as Sydney reopens to fully vaccinated people. Photo: AAP

When lockdowns started in early 2020, demand for security guards vanished.

David Pupualii, the managing director of Sydney-based security provider Crowne Services, said the majority of his team members were on visas and moved back to their home countries.

Fast forward to late 2021, and vaccine restrictions for shops, restaurants and pubs in New South Wales mean that Mr Pupualii is now having to take on shifts himself to keep up with demand.

“It’s like you wouldn’t believe,” he told The New Daily.

Other security guard companies are experiencing the same thing.

“I’ve been in the industry for 20 years and this is probably the highest demand for guards ever,” Danny Farah, managing director of Chief Group Services, told TND.

He said that many pubs and clubs would previously only hire guards during peak trading periods, but are now requesting them at all hours to enforce vaccine rules.

“There are not enough guards to go around,” he said, estimating that there’s a shortage of up to 10,000 security guards in NSW.

Accordingly, many providers are fully booked.

Mr Pupualii said demand is so strong that the larger players in the industry have turned to him for more staff, but to no avail.

“I’ve got their bosses calling me for workers. That’s how desperate they are,” he said.

“I’ve got about 700 employees. They’ve got thousands, and they’re begging me for security guards – that’s how in demand they are.”

The Australian Retailers Association has stressed that security guards are not mandatory, but noted that many businesses are using them to manage the check-in process for customers.

Abuse on the rise

Some customers, including anti-vaxxers, have abused these security guards for enforcing the state government’s vaccination rules.

Mr Pupualii said one guest at an RSL club threatened to fight him in the car park after he turned them away for being unvaccinated.

“I usually just check venues, and check on the clients to make sure they’re happy with the service, but now I’ve had to go out there myself and cop it as well,” he said.

“I’m standing next to my guards and I’m just telling them, ‘Look guys, patience and resilience – come December 1 we’ll be allowed to let everybody in’.”

Mr Pupualii said some unvaccinated customers have even hurled racist abuse at his guards.

Other providers have had mixed experiences.

Mr George said he’s heard reports of abuse, but not like the levels seen in viral social media clips.

“That’s the easiest way to de-escalate – to just let them have their rants and then walk off,” he said.

Pressures on the industry

The exodus of foreign workers is not the only reason for the shortage of security guards.

Security companies say the hotel quarantine system took thousands of guards out of the workforce.

“The implication there is that those guards – as per NSW government guidelines – cannot work at other sites to avoid contamination,” Mr Farah said.

But many guards who usually work at pubs and clubs also quit during the last lockdown.

“They need to work, so they went on to other industries,” Mr George said.

On top of this, Mr Farah estimated that almost a third of guards across the industry don’t want to get vaccinated, which at the moment disqualifies them from these kinds of jobs.

Mr Pupualii said he has also struggled to convince some of his workers to get vaccinated, and blamed misinformation on social media.

Despite these setbacks, many security providers have been sharing labour where possible.

“A lot of companies work together to make it happen and to provide guards across the board,” Mr Farah said.