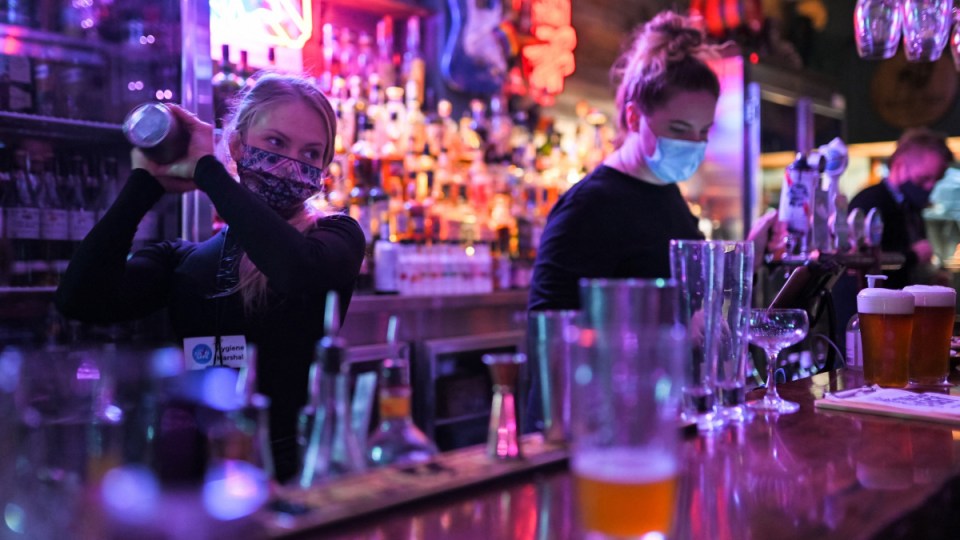 The NSW government has released a business support package as the state eyes a "boom" summer. Photo: Getty

NSW has confirmed 360 new virus cases – its lowest tally in months – as the state government predicts “boom time” ahead for the reopening state.

A total of 444 people have now died in NSW’s Delta outbreak.

Tuesday’s update came as small and medium businesses across NSW were given the green light to stock up in time for Christmas after the Perrottet government released an economic recovery plan it hopes will lead “major summer trade”.

A day after the state began to emerge from a near four-month lockdown Premier Dominic Perrottet and Treasurer Matt Kean announced a package to support business.

On Monday shops, gyms, cafes and hair salons were overrun as fully-vaccinated patrons responded to weeks of pent-up demand, and as people ventured more than five kilometres from home to explore their restored freedoms.

Mr Perrottet said Tuesday’s announcement was “all about confidence”.

“Last year, as we came through the pandemic, business confidence was key – was crucial – to driving economic growth, to ensuring that businesses continued to employ and bring people on,” he said.

Eligible businesses with an annual turnover between $75,000 and $50 million will be able to apply for a grant of up to $20,000 to compensate for loss of perishable stock, or claim $10,000 for reduced capacity to sell non-perishable items if they are impacted by a lockdown.

“As we head into the summer months and Christmas trade … businesses can go out and invest in their businesses, buy stock to get going and we know there has been concern in relation to lockdown,” Mr Perrottet said.

He insisted any future lockdown would be “a last resort, not a first resort” .

“This will give businesses the confidence to buy up big, to get ready for a major summer trade,” he said.

The package also included toll road relief for small and medium businesses with an annual wages cost below $1.2 million that don’t qualify for pay roll tax.

Those businesses will be able to claim road tolls under the small business fees and charges rebate, which is being increased from $1500 to $2000.

“We know that is really going to support tradies right across greater Sydney,” Mr Perrottet said.

“We want businesses to look forward to what will be a bright summer here in NSW.”

Later on Tuesday, NSW parliament will resume after a three-month hiatus with Mr Perrottet facing his first Question Time as Premier after the resignation of Gladys Berejiklian.

And with NSW already on the verge of another critical COVID-19 vaccination milestone, crowds could soon be back in stadiums and nightclubs.

More than 80 per cent of the population is predicted to be fully vaccinated as soon as Monday, the next threshold for easing restrictions.

In the meantime, NSW residents made the most of “freedom day” on Monday with up to 10 adults allowed to visit homes and 30 people permitted to gather outdoors.

While authorities, business owners and hospitality staff were nervous about potential conflict because unvaccinated people are denied entry and in-venue service, most in NSW were on their best behaviour.

Unlike his predecessor, Mr Perrottet said he had no concerns labelling Monday a “freedom day” for the state but reiterated restrictions must still be followed.

Despite those limitations – including mask-wearing, social distancing, strict density limits and venue caps – Small Business Minister Damien Tudehope described the mood in NSW as one of elation.