Retailers and staff across New South Wales are bracing to deal with turning away unvaccinated – and potentially aggressive – customers in the coming weeks.

“We’re concerned that vaccine passports are a flashpoint, and it’s not the job of shop workers to check them,” Bernie Smith, NSW secretary at the Shop, Distributive and Allied Employees’ Association, told The New Daily.

Although the SDA supports the vaccination restrictions to keep workers and customers safe, enforcing these rules has put some staff in a tough position.

Mr Smith said he had already heard reports of abuse and aggressive behaviour from unvaccinated people on Monday, including one man who started destroying a shop’s signage and fixtures.

And it’s not just employees who have concerns.

“Retailers were quite apprehensive ahead of the opening around elevated levels of customer aggression due to vaccination requirements,” Paul Zahra, CEO of the Australian Retailers Association told TND.

“However, we are optimistic that the majority of shoppers will behave respectfully and comply with the law.”

This apprehension from business owners and workers alike is backed by recent data.

Research from the SDA and the McKell Institute found that reports of abuse against retail staff had skyrocketed by 42 per cent during the pandemic.

“The retail sector is preparing for a burst of pent-up activity heading into the festive season, with more customers heading back into stores as restrictions ease,” Mr Smith said.

“We’ve seen an increase in violence towards customers who have had to enforce things like QR codes and masks.

“These figures show that retail workers have genuine reason to fear that ‘vaccine passports’ and QR codes could prove a flashpoint for customer abuse as retail reopens.” 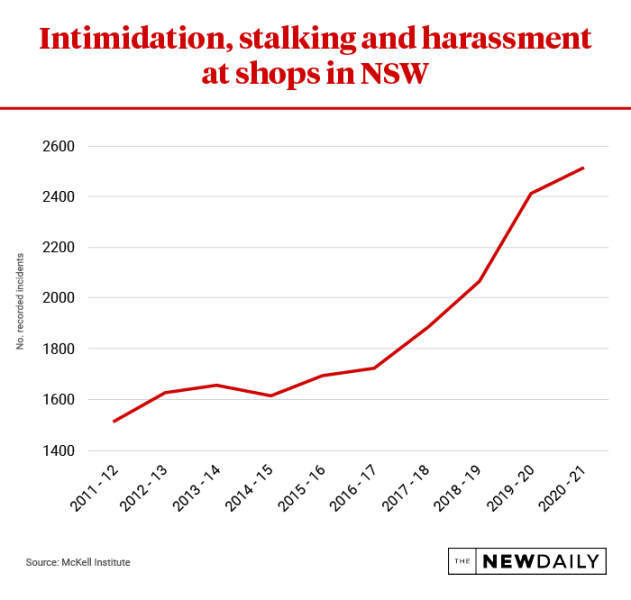 With the NSW government’s digital vaccine passport, VaxPass, unavailable to the public until at least October 18, shoppers will be expected to flash their proof of vaccination in another app or with a hard copy.

As it stands, there are at least 12 ways of confirming your vaccination status in NSW, such as through the Express Plus Medicare app or with with an immunisation history statement.

Most of these can be forged relatively easily.

“Checking vaccination status is a new safety protocol, and like QR codes it will take a little time for customers to adjust,” Mr Zahra added.

“Naturally, this will be a smoother experience for everyone when the app is integrated.”

Vaccine enforcement ultimately comes down to an honour system.

Although shops will still have to display the appropriate signs and take the usual precautions, if an unvaccinated customer slips through, workers won’t get into trouble.

“We have had the ongoing assurance of the NSW government that retailers are not expected to enforce any of these protocols – but simply to encourage compliance,” Mr Zahra said.

“Enforcement is a matter for the authorities including police, and retail teams should be trained in who and when to contact authorities for support.”

However, shops could be fined $5000 if they don’t take “reasonable measures” to stop unvaccinated adult customers from entering.

Mr Smith said that workers are being deployed at the front of shops as part of these “reasonable measures”, and are therefore still coming face to face with abusive anti-vaxxer customers, even if the law doesn’t explicitly require them to do so.

He pointed to a worker who was punched in the face for asking a customer to check in with a QR code as an example of what could happen before the holiday season.

The SDA and other unions are now calling for security guards to be deployed across shops to make sure everything goes smoothly, as well as increased fines for customers.

At his Monday morning press conference, Premier Dominic Perrottet said opening back up would depend on “everyone doing the right thing”.

“I accept there will be challenges and issues along the way,” he said.

“I ask businesses: Where you can, check that data is correct.”

With NSW opening up again, retailers and staff are bracing to deal with angry anti-vaxxers