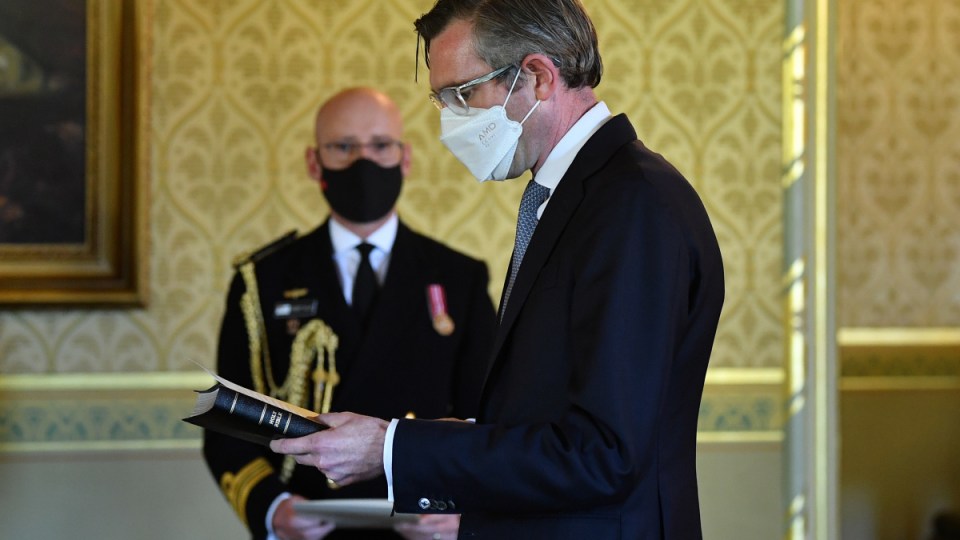 Dominic Perrottet was sworn in as NSW Premier on Tuesday afternoon. Photo: Getty

NSW’s roadmap out of lockdown will be reviewed by the state’s crisis cabinet with newly installed Premier Dominic Perrottet hinting some requirements could be tweaked.

Mr Perrottet, who was sworn in on Tuesday, will meet health officials and his crisis cabinet on Wednesday to go over the plan for the state to emerge from months of lockdown from October 11.

His government’s first challenge will be navigating the path out of lockdown, which began in greater Sydney more than 15 weeks ago.

“There’s a number of areas within the roadmap that can be looked at,” Mr Perrottet told Sydney radio 2GB on Wednesday.

The crisis cabinet will meet after the Nationals vote for a new party leader on Wednesday morning.

Nationals deputy leader Paul Toole is widely tipped to get the top job ahead of rival Melinda Pavey, who is Water, Property and Housing Minister.

NSW is due to start throwing off the shackles of lockdown on Monday after it hits the 70 per cent double COVID-19 vaccination milestone for those 16 years and over.

Key to the transition will be an economic recovery plan, which Mr Perrottet will unveil this week, and the ability of the state’s health system to cope with an expected spike in COVID-19 cases when restrictions ease.

Mr Perrottet said while the economy had taken a significant beating during the lockdown, which began in June, he expected NSW to “bounce back very quickly”.

“As we head into December and over the summer period as businesses open … we’re going to have a very bright summer,” he said.

“What we’ll see is a stronger economy on the other side.”

Mr Perrottet is also determined to get workers back into offices to breathe life back into major CBDs “this year and as quickly as possible”, but he acknowledged mandatory mask-wearing in offices was an impediment.

Under the roadmap, masks remain compulsory in indoor environments until December.

He was reluctant to say if he would push for that requirement to be ditched earlier.

“I don’t want to pre-empt any decision yet. We’ve got a cabinet meeting this afternoon and we’ll work through that,” he said.

“There’s a number of issues that I want to raise with our health officials.”

Mr Perrottet also said that from now on lockdowns would be the last resort if there was an outbreak, as the state’s vaccination rates continued to rise.

As of midnight Monday, 88.6 per cent of people aged 16 and over in NSW have had at least one dose and 67.7 per cent were fully vaccinated.

As a staunch Catholic, Mr Perrottet – who opposed the decriminalisation of abortion in NSW and same-sex marriage – said he was not going to make any changes.

“I have no intention of changing the laws in that space,” he said.

Alan Kohler: The major parties have no plan for housing affordability
A pilot for vaccine passports in NSW is supposed to start today. Here’s what little we know
Today's Stories

NSW roadmap out of lockdown under review