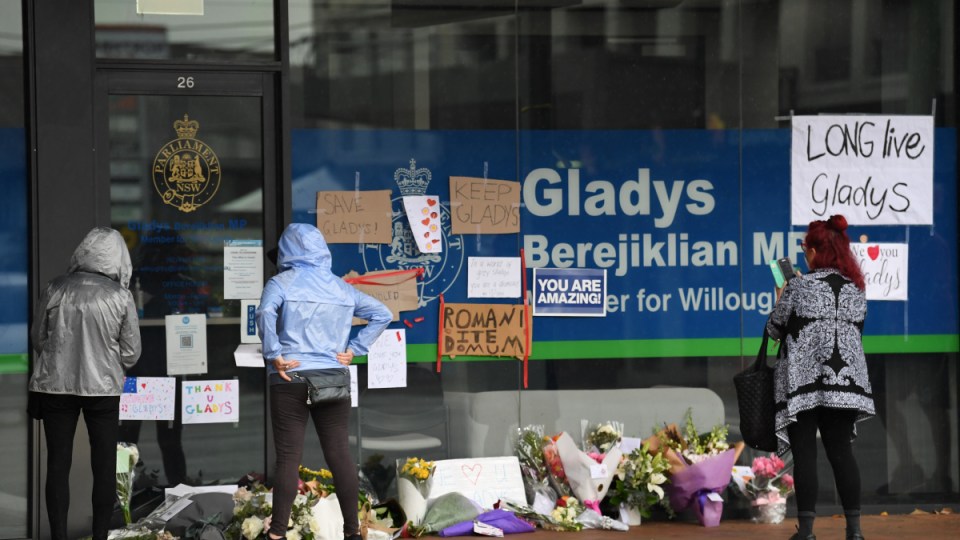 Tributes have piled up outside Gladys Berejiklian's electorate office since she announced last Friday she would quit politics. Photo: Getty

Former NSW premier Gladys Berejiklian has made her first public appearance since her shock resignation that sent politics in the state into turmoil.

Ms Berejiklian spoke to the media and public outside her electorate office in Willoughby in northern Sydney on Wednesday morning.

It was the first time she had been seen or spoken in public since her resignation last Friday after the NSW anti-corruption watchdog announced it was investigating her.

Ms Berejiklian was not at state parliament on Tuesday for the Liberal party room ballot to elect Dominic Perrottet as her successor.

“I just want to say thank you to everyone for the support they have shown me,” she said on Wednesday.

“A big thank you to everyone, it’s been an enormous comfort to know people care.

Ms Berejiklian was at the office on Wednesday with local federal Liberal MP Trent Zimmerman.

She also collected some of the dozens of flowers and other tributes left outside the office by supporters. They include posters with messages such as “Long live Gladys” and “Best Premier Ever”.

“I just want everyone to know that I will read every single card and every single message and I really really appreciate it,” she said.

“He will be an outstanding leader and at this time we need everyone to follow the Premier’s words to make sure we come out of this lockdown as safely as possible,” she said.

Ms Berejiklian’s public appearance came just minutes before the NSW Nationals confirmed they had elected former deputy Paul Toole to lead them. He will replace John Barilaro as deputy premier – Mr Barilaro resigned on Monday and will quit politics, triggering a byelection in his seat.

Ms Berejiklian, who has taken few questions since her sudden resignation, said last Friday she had no choice but to resign after the Independent Commission Against Corruption announced it would investigate her for alleged corruption.

ICAC will examine grants approved in the seat of Wagga Wagga, held at the time by her former lover Daryl Maguire.

It will begin 10 days of public hearings on October 18.