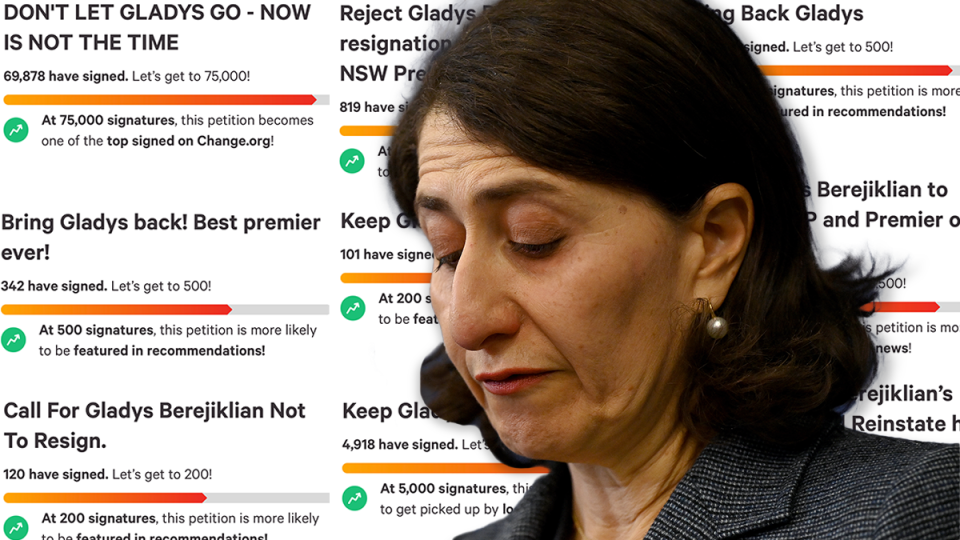 Some people in NSW have created Change.org petitions to keep Gladys Berejiklian as Premier. Photo: TND

The 53-year-old therapist, who describes herself as “not at all political”, quickly set up a Change.org petition calling for Ms Berejiklian to be reinstated.

Over the weekend, the petition amassed almost 70,000 signatures.

“I was sitting, watching TV on Friday with my mum and I took one look at Gladys and her expression and said straight away – she’s going to resign,” Ms Phillips told The New Daily.

“And then I lost my breath. This sounds so dramatic, and it actually was.”

Her petition was one of about 40 to spring up on Change.org after Ms Berejiklian’s resignation.

All of them called for Ms Berejiklian to be reinstated as Premier, despite the fact she chose to resign in the face of an ongoing investigation by the Independent Commission Against Corruption.

“It’s not normal for a petition to go off that quickly.”

Mr Holas said the surge in signatures to Ms Phillips’ petition – roughly 70,000 in less than three days – was unusual for a political crisis in Australia.

Mr Zaytsev told TND he’s not much of a Liberal supporter, but said he finds Ms Berejiklian “likeable” and respected how she handled the lockdown.

“To be honest, I think the main thing for me is to send her a message that people have a certain feeling, because I understand, given the situation, that it’s very unlikely that she would reverse her decision,” the 33-year-old software engineer said.

“You know people who live in her seat of Willoughby, they can just rock  up to her office and leave some flowers. But I can’t do that because I’m in an LGA of concern.

“The angle for me was to try to send her a message that, ‘look, we kind of care, you know, we’re citizens who respect your work’.”

The majority of the petitions calling for Ms Berejiklian to stay on as Premier point to her leadership during a time of crisis, rather than to specific political or ideological reasons.

“This woman has been on our screens day in and day out, fighting the good fight,” Ms Phillips told TND.

“One minute [people] want stricter lockdowns, and the next they’re calling this a draconian leadership. How can you win?

“And yet, Gladys steered the ship.

“Yes, she changed course, but when navigating a storm, one has to adapt to the ever-changing dangers.”

Mr Holas from Change.org said women started the majority of the petitions, but Ms Phillips cautioned against painting it as a gender issue.

She said she was more unhappy with the timing of ICAC’s revelation, which has coincided with the tail end of lockdowns in NSW.

“I could so easily make this about another dynamic woman being thrown under the political bus,” she said.

“But rather than hide injustice behind the gender defence, this is about a dynamic leader who courageously steered the way through seriously uncharted, extremely dangerous waters.”

Ms Phillips and Mr Zaytsev said they abhor corruption, but added they’ll only be convinced of wrongdoing on Ms Berejiklian’s part if ICAC finds her guilty.

“If they find her guilty, that will be a major disappointment, obviously, for me,” Mr Zaytsev said.

“But I think, regarding the good work that she’s done through the crisis that’s been battering the state since bushfires, you can’t erase that with some grants.

“To me, these are separate acts, and one is still not proven yet.”

But federal Labor leader Anthony Albanese used the opportunity to renew his call for a federal ICAC.

The polarised views about Ms Berejiklian’s resignation, and the ICAC investigation, in part reflect the faith some people place in visible leadership during a pandemic.

“That doesn’t make them politically naive – that means that they are focusing on what’s in front of them, and they’re surprised by the news,” Mr Holas said.

He stressed the news even caught many political insiders off guard.

A separate kind of petition has also emerged in the wake of Ms Berejiklian’s resignation, not in support of her, but rather in opposition to her likely successor.

“The front runner to replace her is [Treasurer] Dominic Perrottet, a white male who is publicly anti-abortion, anti-diversity, anti-marriage equality – and who has referenced Trump and Folau positively in tweets,” reads a petition by Dr Kate Ahmad, which has more than 7000 signatures.

“For safety and diversity – we want to be represented by someone other than a white, middle aged, privileged male who is openly religious and expresses views which may be harmful to women and minorities.”