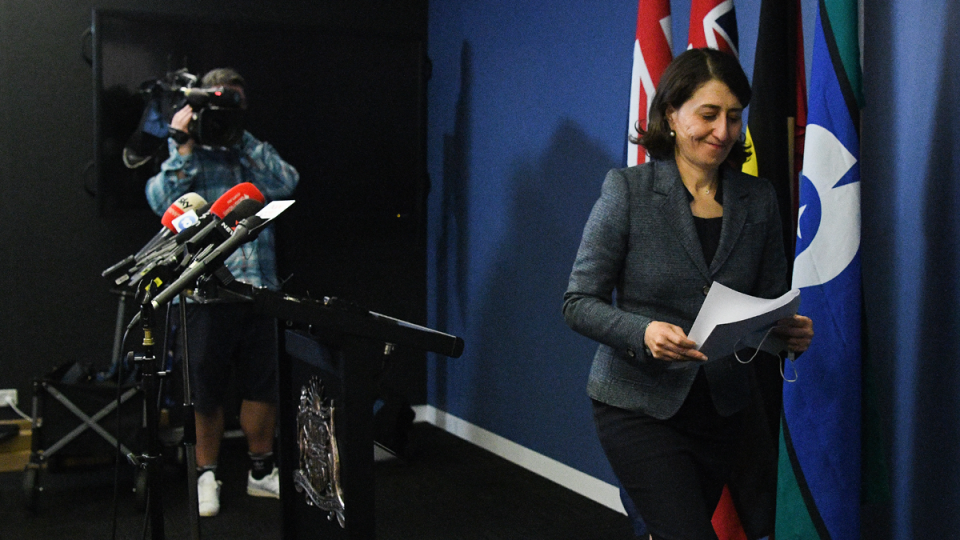 October – New South Wales Premier Gladys Berejiklian tearfully announces her resignation after the state’s corruption watchdog revealed it was investigating her conduct. Her resignation was followed closely by that of deputy premier John Barilaro, with Transport Minister Andrew Constance also announcing he would depart state politics at the next election. Photo: AAP

Three of the most senior figures in the New South Wales government have quit in four days.

The exodus has created a power vacuum that Treasurer Dominic Perrottet is now expected to fill.

How it played out (and why)

Ms Berejiklian resigned on Friday after the NSW Independent Commission Against Corruption (ICAC) announced it was investigating her.

The Premier had previously given evidence at an ICAC inquiry relating to a secret, five-year relationship with disgraced former MP Daryl Maguire.

Back in 2017, the state government awarded a $5 million grant to a gun club in Mr Maguire’s electorate.

Ms Berejiklian previously claimed all proper processes were followed, but resigned after having set a standard for government MPs to step down until their names are officially cleared.

It wasn’t long before other senior figures resigned for their own reasons.

Mr Constance was a senior cabinet member and seen as a potential successor to Ms Berejiklian.

He said in light of the other two departures, now was “the right time”.

Mr Barilaro was automatically made acting Premier after Ms Berejiklian’s resignation on Friday.

The three departures have left the party’s state leadership in a lurch, but one cabinet member is already vying to take the reins at a meeting on Tuesday.

Who will be the next NSW Premier?

Treasurer Dominic Perrottet is tipped to become the next premier.

Mr Perrottet was already a leading contender to succeed Ms Berejiklian before her shock resignation, and now a backroom deal and a series of endorsements appear to have cemented his victory in a forthcoming party room ballot.

Under the deal, Minister for Western Sydney Stuart Ayres would serve as deputy party leader, while Environment Minister Matt Kean would become Treasurer.

The father of six has risen through the ranks since he was elected at the age of 28.

He has represented several Sydney seats and assumed multiple cabinet positions before becoming Treasurer under Ms Berejiklian in 2017.

His tenure as Treasurer was marked by revelations that the state’s workers compensation scheme, icare, had underpaid 52,000 injured workers by up to $80 million, and was itself on the brink of collapse due to mismanagement.

In 2019 Mr Perrottet voted against decriminalising abortion. He has also said that people wanting to vote on marriage equality aren’t necessarily homophobes.

More recently, his eagerness to keep NSW out of lockdown has come under fire after cases skyrocketed in Sydney this year.

When Donald Trump was elected US President in 2016, Mr Perrottet called it “a victory for people who have been taken for granted by the elites in the political establishment for too long” and called for “a conservative spring”.

Blues Point Tower was No.1.

What’s next for everybody else?

Guardian Australia reports that Ms Berejiklian has already been approached to run for the federal seat of Warringah – the former electorate of Tony Abbott, who lost to a grassroots campaign focusing on climate change by Olympian Zali Steggall in 2019.

This would be contingent on Ms Berejiklian being cleared of any wrongdoing by ICAC – something she insists is inevitable.

For now, though, that could be a while away.

“I cannot predict how long it will take the ICAC to complete this investigation, let alone deliver a report, in circumstances where I was first called to give evidence at a public hearing nearly 12 months ago,” Ms Berejiklian said during her resignation announcement on Friday.

She will reportedly collect a pension worth $200,000 a year, for life.

Meanwhile, Mr Constance has already announced that he will switch to federal politics as a candidate in the Labor-held seat of Gilmore.

The party hopes his 17-year stint as the representative for an overlapping state electorate will boost his chances.

Mr Constance was a friend of Ms Berejiklian’s and has been an outspoken advocate of stronger action on climate change, including greater investment in renewables, since the 2019-2020 bushfire season.

As for Mr Barilaro, who once mulled a bid at federal politics, he now says his time is up.

“I turn 50 in November … maybe a mid-life crisis,” Mr Barilaro said on Monday.

“But I’m thinking about what’s next and I’ll take time out. But I genuinely won’t be running for office.”

After three massive resignations, here’s what’s next for the NSW government