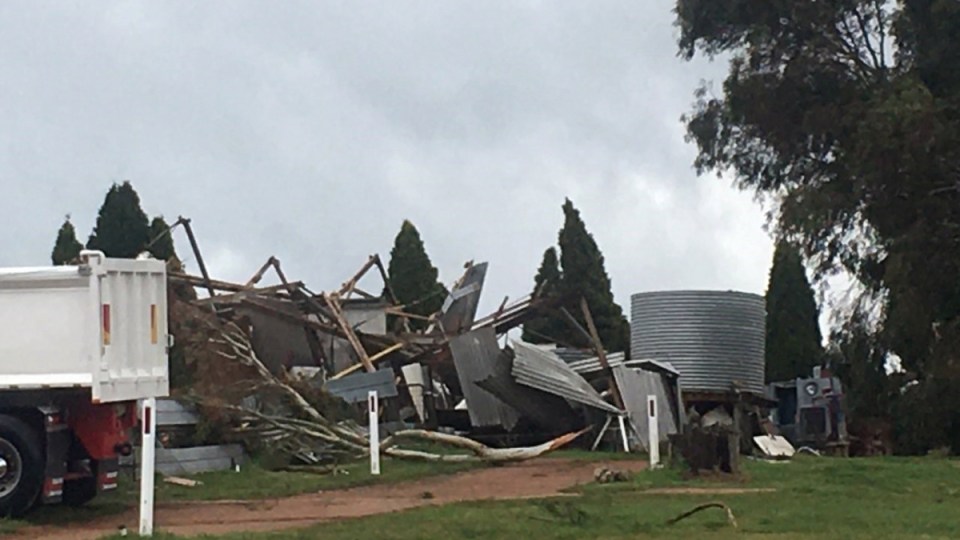 This house was destroyed by Thursday's tornado at Meadow Flat, near Bathurst. Photo: AAP

Residents have a big clean-up ahead after a tornado ripped through central-west NSW, injuring three people, tearing roofs off homes and sheds and knocking down trees and powerlines.

The violent storm travelled up to 30 kilometres on Thursday afternoon and demolished a house at Meadow Flat in the Bathurst region, while at least one other home along with sheds and other structures were also flattened in the area.

“It took the house, the roof, it took everything,” resident Kathy Jones told Channel Seven.

“Everything was just swirling around.”

Another resident said the frightening experience felt like the end of the world.

This included destroyed and damaged houses, cars, many fallen trees and powerlines across roads.

About 120 homes were without power overnight.

Emergency services attended Meadow Flat before 2pm where a man in his 40s was treated for a laceration to his right arm.

A woman at Clear Creek, north-east of Bathurst, suffered injuries to her back and neck and was taken to Bathurst hospital in a stable condition.

A man in the area was also assessed but didn’t require further medical attention.

NSW Ambulance Inspector Meah Ferguson, who attended the man with the injured arm at Meadow Flat, said the patient’s house and surrounds were extensively damaged.

“It’s not every day you get called out to a tornado and this one packed quite a punch,” she said.

“When you look at the kind of damage the tornado caused, it’s lucky the patient escaped with relatively minor injuries.”

The tornado is part of a larger weather system that has caused severe thunderstorms across parts of the NSW, the ACT and Victoria for days.

Update: Severe thunderstorms have now eased in #NSW. Non-severe thunderstorms continue, and the development of further severe storms remains possible throughout the day. If storms become severe, warnings will be issued at: https://t.co/Ss766eSCrL pic.twitter.com/RByYZjtxGx

“The development of further severe storms remains possible throughout the day,” a BOM update said on Friday.

Overnight a severe thunderstorm warning was issued in Queensland’s south-west near Toogoolawah moving to the south-east, towards Esk and the D’Aguilar Ranges. Damaging winds and large hail were likely.