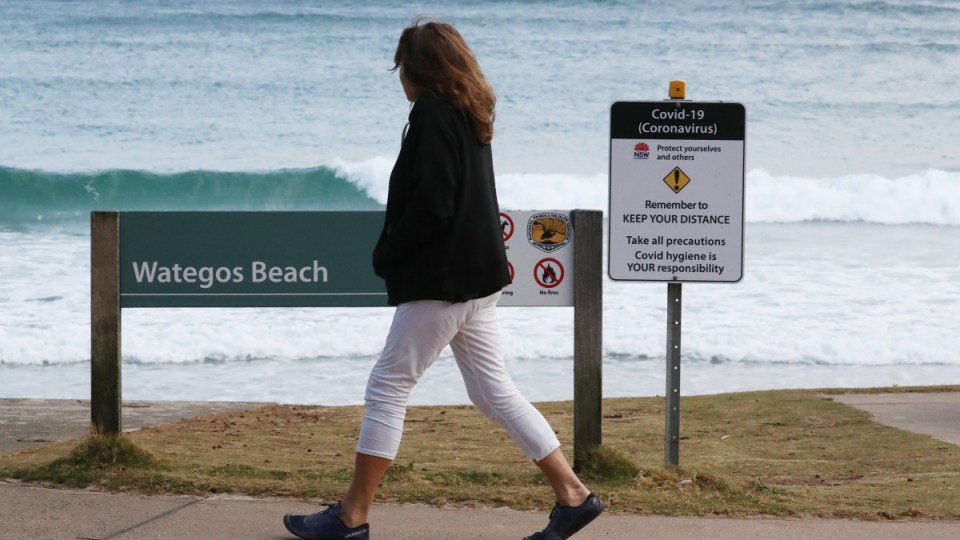 Byron Bay faces a possible return to lockdown only hours after the last one was lifted. Photo: AAP

The Byron Shire could be sent back into lockdown only hours after it was released, with two new cases who were infectious in the community identified.

The Tweed, Byron and Kempsey areas were freed from lockdown overnight, while stay-at-home orders were reintroduced in Port Macquarie and Muswellbrook for at least one week.

But the freedom of residents in the Byron Shire is likely to be short lived, with one case diagnosed in the Kyogle area and a second in Byron Bay, local MP Tamara Smith confirmed.

“Initial investigations indicate that both people had been infectious in the community, with contact tracing and investigations currently under way,” she said on Wednesday.

The Tweed and Byron areas were re-included in the Queensland border bubble when restrictions lifted overnight, but the cases will likely mean the Byron area is excluded again.

It came as the deadline for health workers to be vaccinated against COVID-19 with at least once dose loomed.

Some 94 per cent of the NSW Health workforce is vaccinated, but staff have until Thursday, after which they will be unable to work.

Unvaccinated people in the broader NSW community are also being warned they’ll likely be missing out on certain freedoms and activities beyond December.

NSW will emerge from lockdown in a fortnight after almost four months of stay-at-home orders for large parts of the state.

And those who refused the jab were likely to remain barred from most hospitality and entertainment venues as well as air travel, he said.

Socially-distanced reintroductions to hospitality venues and hairdressers will begin from October 11, at 70 per cent full vaccination coverage.

About two weeks later, the state is expected to reach 80 per cent coverage, triggering additional freedoms and the resumption of regional travel.

These freedoms will only be restored for the fully vaccinated.

Police Commissioner Mick Fuller said officers wouldn’t routinely stop people and ask to see their vaccination passports, but would be available to help business owners who refuse service to anyone.

NSW had another 863 local coronavirus cases on Tuesday – dipping below Victoria’s 867 daily infections – and seven deaths.

It takes the toll for the current outbreak to 316.