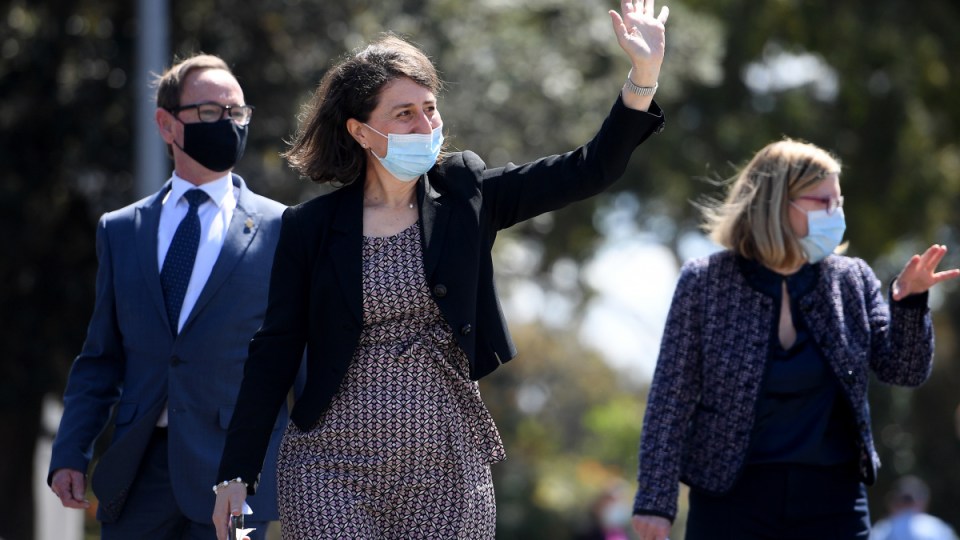 NSW will begin to reopen in just a fortnight, as its local COVID cases drop to a level not seen in weeks and it passes crucial vaccine milestones.

There were 787 new local infections in NSW on Monday, along with another 12 fatalities.

They were six men and six women, aged from their 60s to their 90s.

They take the state’s toll from its current outbreak to 309.

It is the lowest daily tally of local virus infections for NSW since 644 on August 20.

Premier Gladys Berejiklian said more than 60 per cent of the state’s residents were fully vaccinated against the virus, and first doses had officially topped 85 per cent.

“I can say quite confidently we envisage 11 October will be the day we will be able to adhere to that road map and I just say to everybody across the state, thank you so much for your patience,” she said.

“It is just this week and next week that we have to hang in there for. We are nearly, nearly there.”

Ms Berejiklian outlined an official three-step plan to reopen the state after its devastating Delta outbreak. The first step will come when 70 per cent of eligible residents are fully vaccinated, followed by the next at 80 per cent.

“We envisage there will be a very short period of time between 70 per cent and 80 per cent [fully vaccinated], as little as two weeks, because of the rate of vaccination we have seen,” she said.

“At 80 per cent double-dose vaccination we can confirm that is when you will be able to travel freely throughout NSW. We envisage that to be by the end of October.”

Other milestones to come at the 80 per cent rate include standing up and drinking at pubs, up to 10 visitors to homes, and the return of community sport and international travel.

The third stage is expected about December 1, when 90 per cent of eligible people are fully vaccinated. Unvaccinated residents will also be able to enjoy the resumed freedoms from then.

At that point also, the requirement for masks indoors will be dropped.

“But there is no doubt that, for those of us who are fully vaccinated, at the 70 per cent double dose life will feel so much better, life will feel getting back to normal ideally, and obviously a number of things kick in at 80 per cent.”

She also said NSW’s hospitalisation rate was lower than had been predicted.

There are 1155 COVID-19 cases in the state’s hospitals. They include 214 in intensive care, 115 of those on ventilators.

The state’s hospitals are still predicted to be overwhelmed with COVID patients in coming weeks.

“Technically we are still looking at our system being overwhelmed in October and I ask people to exercise caution there. We know that once we start reopening at 70 per cent double dose, that the case numbers will go through the roof but what will protect us is the fact that so many people have received at least the first dose of the vaccine,” she said.

“The vaccine has been our absolute weapon in fighting this Delta variant and, notwithstanding how hard it’s been, when I look back there isn’t a single decision – we don’t get every thing right – but I don’t regret for a second the strategy we undertook.”

Meanwhile, from Monday, outdoor pools are permitted to re-open across NSW, with even the unvaccinated allowed to swim at pools within their local government area.

Construction sites in NSW can also return to full capacity with COVID safety plans, after previously being restricted to 50 per cent.

‘Nearly, nearly there’: NSW ready to reopen on October 11