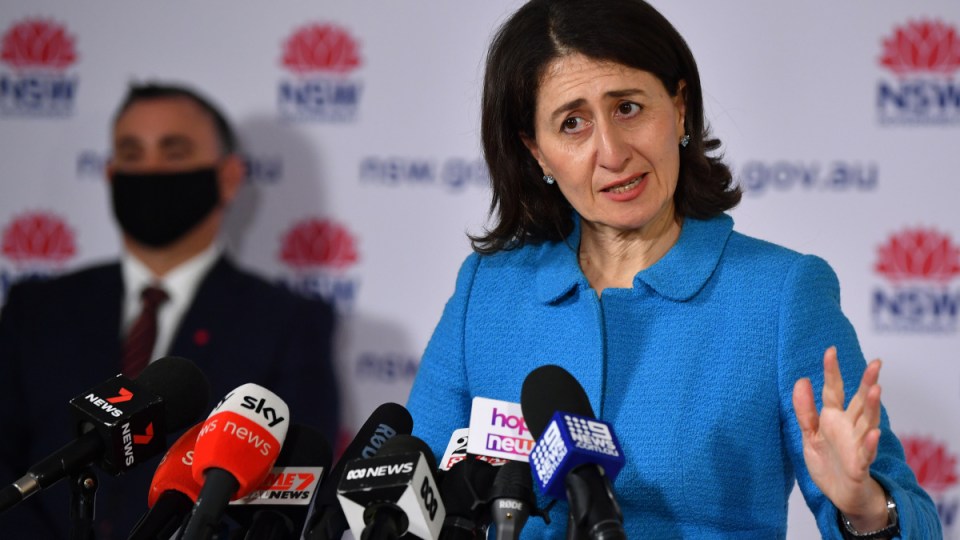 Fully vaccinated adults in NSW will get even more freedoms once 80 per cent of over-16s have received two doses by late October, Premier Gladys Berejiklian has announced.

The eased restrictions will include higher limits on home gatherings, no caps on attendees at weddings or funerals, and so-called “vertical drinking” at bars and pubs.

But the changes will be gradual, with further easing including no limits on guests allowed in homes slated for December 1.

NSW is on track to hit the 80 per cent milestone in mid-to-late October, roughly two weeks after hitting 70 per cent.

People will be able to enjoy the new freedoms on the Monday after that date. Here’s what to expect. When can we go to bars and pubs?

Now, once NSW hits the 80 per cent milestone, so-called “vertical drinking” will also be allowed.

That means patrons won’t have to stay seated in bars or pubs. However, nightclubs will remain closed until December 1.

Another new freedom is that group bookings will be allowed for up to 20 people.

Deputy Premier John Barilaro added that while unvaccinated people in some parts of rural NSW can currently enter these venues, they will “lose their freedoms” once the 70 and 80 per cent hospitality rules come into play.

What about shopping and haircuts?

In both cases, a one-person-per-four-square-metres rule will be in place.

However, businesses like hairdressers and nail salons will no longer be limited to just five customers at one time, so long as they still abide by the one-person-per-four-square-metres rule.

It’s expected that people will need to show a vaccine passport to prove they are immunised or have a medical exemption before entering these businesses. 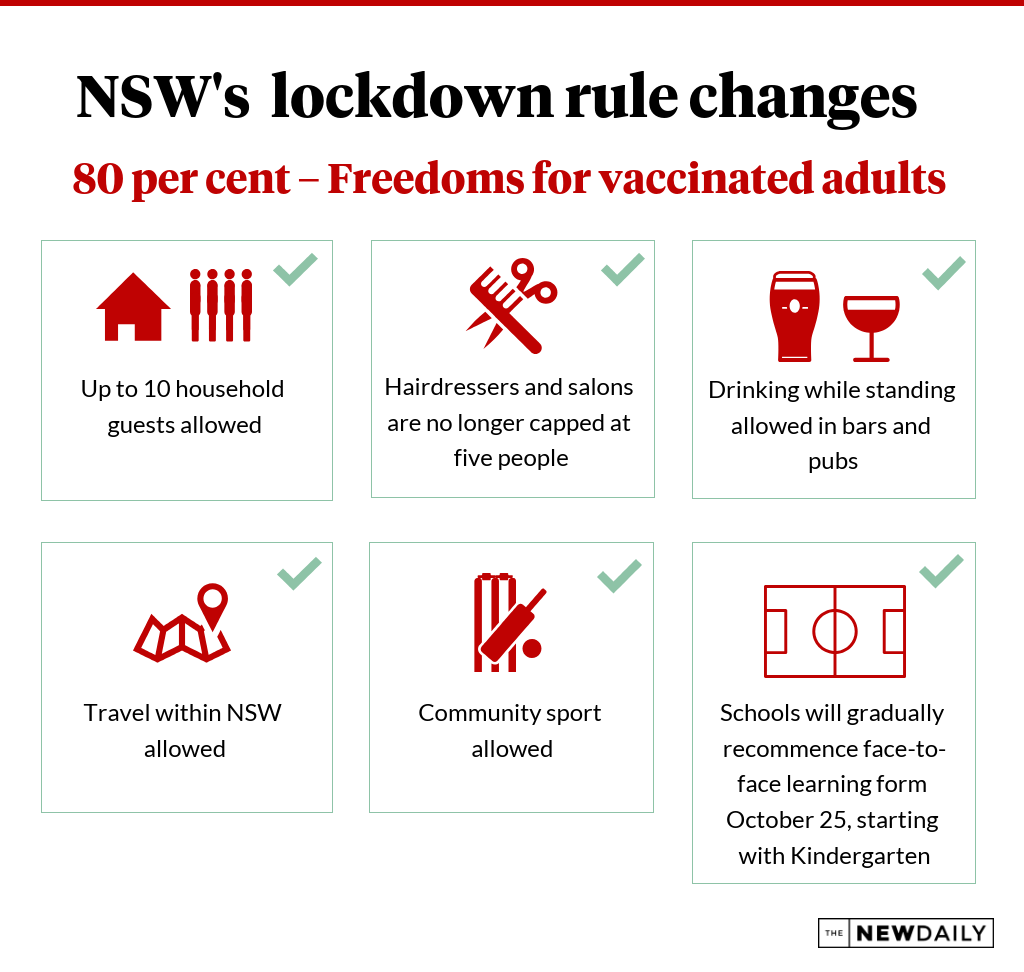 Will large weddings and funerals be allowed?

Fully vaccinated people will be allowed to have weddings and funerals with an uncapped number of guests, as long as there is no more than one person per four square metres.

Dancing and eating while standing will also be allowed again.

However, unvaccinated people will be limited to attending weddings and funerals with five and 10 people respectively.

How big can gatherings be?

Informal outdoor gatherings of up to 20 people will be permitted once the 70 per cent milestone has been reached.

According to the roadmap, up to 200 people will be allowed to attend COVID-safe events.

The 500-person cap on ticketed events and the 5000-person limit for stadiums both remain unchanged from the previous 70 per cent milestone.

How far will we be able to travel?

Unrestricted travel within NSW was originally flagged for 70 per cent double-dose coverage, but it has now been pushed back to 80 per cent.

This came after concerns from regional leaders about the current disparity in vaccine coverage.

Overseas travel is the domain of the federal government but is slated to restart later this year.

“Once the PM gives that green light, we will be able to go overseas as well,” Ms Berejiklian said.

What’s next for NSW?

From December 1, vaccinated and unvaccinated residents will be able to enjoy even more freedoms.

There will be no limit on house guests, nor any cap on informal outdoor gatherings.

Masks will no longer be mandatory indoors, except for on public transport and for some hospitality staff.

Venues including indoor pools and nightclubs will be allowed to reopen.

The amount of people allowed in hospitality, retail and service venues like restaurants or hairdressers will rise to one person per two square metres.

However, it’s expected that some venues might choose to restrict access to people who aren’t fully vaccinated.

“After that December 1 date, it will really be up to the businesses to what decisions they take,” Ms Berejiklian said. 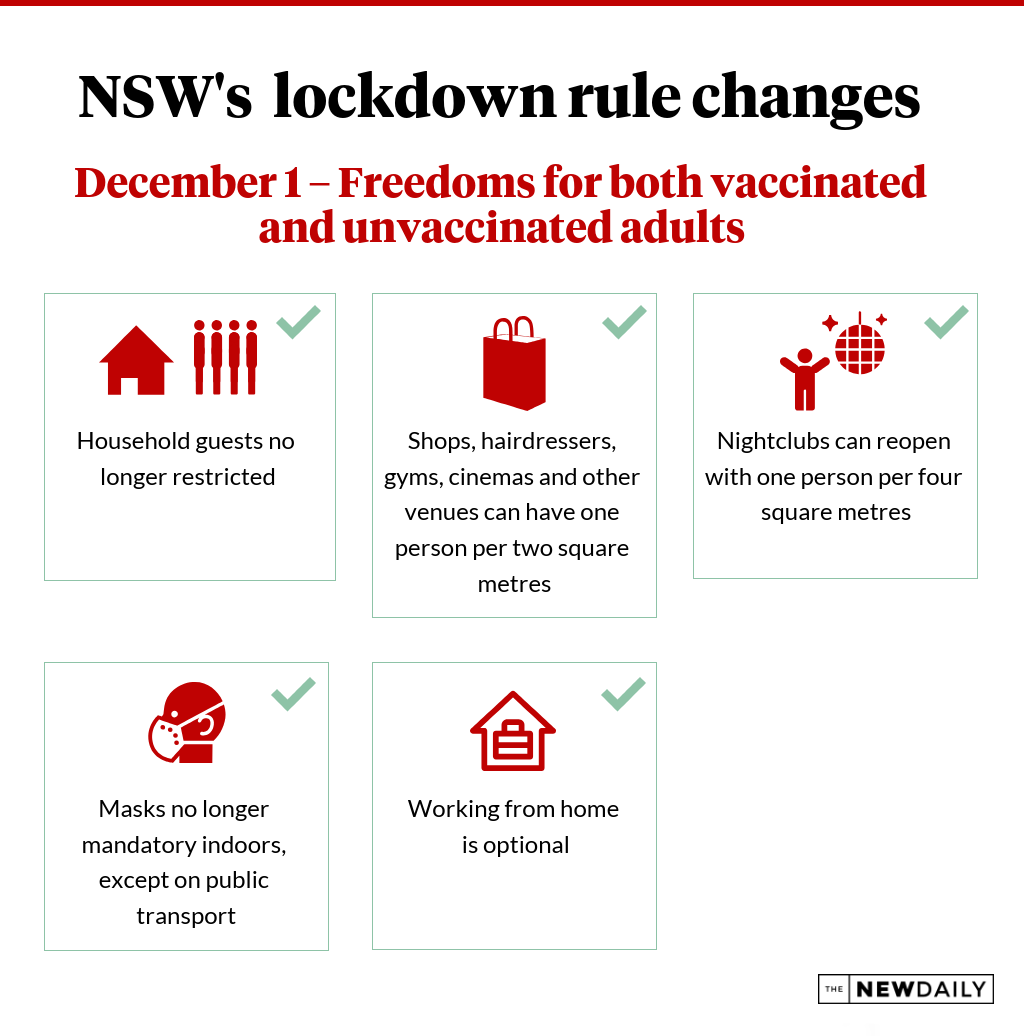 What about unvaccinated people?

Unvaccinated people will have to wait until December 1 to access new freedoms beyond attending places of worship.

“It is very important to note that unlike most cases around the world, if you are not vaccinated you will have to wait at least four or five weeks after we’ve already hit the 80 per cent double-dose rate in order to participate in things that the rest of us can participate in,” Ms Berejiklian said.

“That is a high jump for people to have to go through if you are not vaccinated.

“The message is, if you want to be able to have a meal with friends and welcome people in your home, you have to get vaccinated. That is a simple message.”

Until December, the one exception will be attending places of worship.

Other than that, unvaccinated people will be limited to essential shopping, click-and-collect for all other goods, and takeaway for food.

“It is a disappointing day for those who are unvaccinated, but it is not too late,” Ms Berejiklian added.

“You have the option. Go today, make your booking and get vaccinated not only to protect yourself and your loved ones but also the community.”

New South Wales has a new path out of lockdown. Here’s what rules are changing