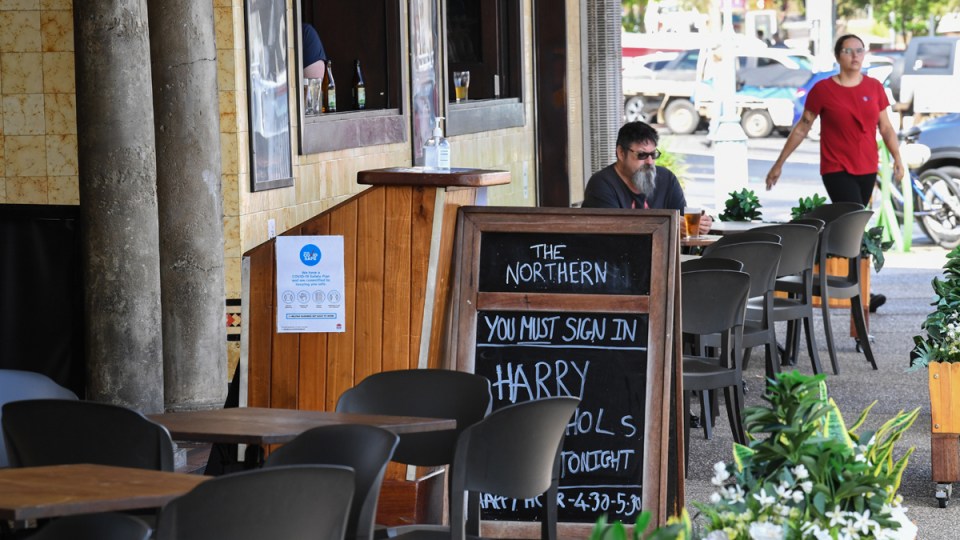 Byron Bay is back in lockdown after a confirmed virus case in a worker on a TV show being filmed in the area.

Police have charged a woman who travelled to Byron Bay to work on I’m A Celebrity … Get Me Out Of Here! before testing positive to COVID.

Byron and the neighbouring Tweed shire were plunged back into lockdown on Tuesday night after it emerged the woman had tested positive on Monday after flying from Sydney to Ballina on Saturday.

NSW Police said on Wednesday the 31-year-old woman had been granted an exemption to travel to the northern rivers – where the reality TV show is being filmed – for work.

She was supposed to remain under stay-at-home orders that apply to Sydney.

But police allege she visited shops and other venues in Byron Bay and Kingscliff at the weekend, in breach of the conditions of her exemption. They say she also failed to use QR codes to check-in.

There are several exposure sites in both towns following her diagnosis.

The Rushcutters Bay woman – who is fully vaccinated – faces five counts of failing to comply with electronic registration directives.

She is due to appear before Tweed Heads Local Court on November 8.

Earlier, NSW Liberal Catherine Cusack accused the Berejiklian  government of failing to adequately protect the regions from the risk of the virus after the lockdowns were announced.

Ms Cusack said allowing I’m A Celebrity … Get Me Out Of Here! to be filmed in the vulnerable region was an unnecessary risk.

The Tweed Council had asked the NSW government not to approve it, Ms Cusack said.

“To begin with, the definition of an essential worker – which is apparently the reason she was able to be up here – in my view is way too elastic in such a sensitive area,” she told Sydney radio 2GB on Wednesday.

“There is no way any risk like that should be taken in relation to that community.”

Vaccination in the Tweed is below the state average with 71.7 per cent of people getting a first dose, while 45 per cent are fully vaccinated. In Byron it is 60.9 per cent of eligible residents with one dose and 34.9 per cent with two.

That compares to the NSW-wide total of 54.2 per cent double-dose vaccination coverage among those aged 16 and over.

NSW reported another 1035 local virus cases on Wednesday and five more deaths. The outbreak in the state has now claimed 260 lives.

The production company behind the reality show also confirmed the worker’s infection.

“This discovery was made through the rigorous testing regime implemented by our COVID-safe plan,” an ITV Studios Australia spokesperson said in a statement.

“The crew member is fully vaccinated and was wearing PPE while at work.”

All of the her close contacts have been identified and are isolating while they await test results.

“We are working with NSW Health to ensure all necessary steps are taken in relation to contact tracing, testing and further communication to anyone that needs to isolate,” ITV Studios Australia’s spokesperson said.

Elsewhere, the state government said on Wednesday it would trial its “vaccination passport”, linked to the Service NSW check-in app, in regional NSW from October 6.

Vaccination status will be linked to the QR code check-in system.

“When we hit 70 per cent double dose, irrespective of when it is, [we’ll be] ready to roll out that vaccine passport,” Premier Gladys Berejiklian said.

The government says freedoms will be restored at 70 per cent coverage for the fully vaccinated even if the vaccination passport is not yet fully operational.

Those yet to be fully vaccinated will be excluded.

NSW Health also said on Wednesday afternoon that stay-at-home orders in the regional areas of Lismore and Albury would lift from midnight. Both LGAs were sent into snap lockdowns last week.

Lockdowns in the Gilgandra and Brewarrina LGAs will also lift from midnight Wednesday, while Narromine will be released on Saturday.