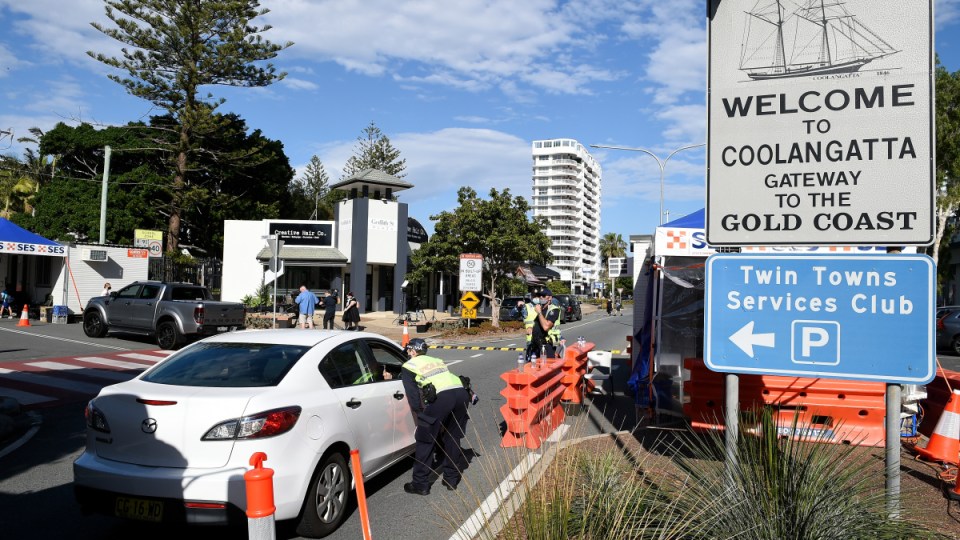 The renewed border tensions come only a week after rules were eased slightly. Photo: Getty

The NSW-Queensland border bubble is threatening to burst only a week after it was reinstated, with the revelation a COVID-19 case was infectious in several northern NSW communities for two days.

The Northern NSW Local Health District on Monday night confirmed a person had tested positive to the virus on Monday.

Their infection will be formally included in the numbers announced on Tuesday.

The case – who is not a local – flew from Sydney to Ballina on Virgin Flight VA 1141 on Saturday morning and was infectious in the Byron, Ballina and Tweed areas until their positive test result on Monday.

All passengers and crew aboard the flight are being contacted by NSW Health and will be required to get tested and self-isolate.

A lockdown is all but certain for the region, with stay-at-home orders reinstated for several other NSW regional towns after cases were diagnosed.

On Monday, the western NSW town of Cowra was forced back into lockdown, when a nine-year-old school boy tested positive to the virus.

But with several areas included in the border bubble with Queensland now visited by infectious COVID-19 cases, there are fears the travel conditions could revert back to their strictest conditions.

Students and essential workers from the LGAs have been able to travel into Queensland from September 13, in an arrangement negotiated after weeks of sparring between the Queensland and NSW governments.

It came as NSW reported fewer than 1000 new infections on Monday, for the first day in almost a month.

Some 935 new local COVID-19 cases were confirmed and four deaths – two people in their 60s and two in their 80s – that took the toll for the current NSW outbreak to 245.

It was the lowest number of daily infections since August 27, when the figure last dipped below 1000, but Premier Gladys Berejiklian pleaded with NSW residents to remain on high alert.

“We have had a number of cases in the last few weeks … people ordinarily get very sick in the second week of the illness.

“I don’t want any of us to sit back and think the worst is behind us. Because, unfortunately, too many families are going to have loved ones end up in hospital, or worse.”