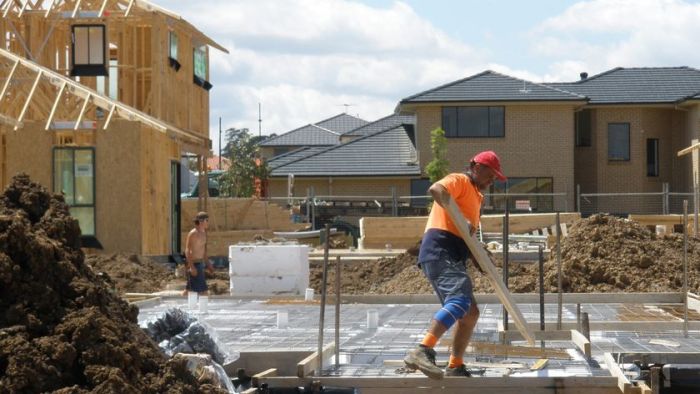 Construction is driving an economic improvement in NSW. Photo: AAP

The NSW construction industry will return to full capacity from next week as the state’s vaccination coverage continues to grow.

From next Monday, NSW will ease all capacity limits on construction sites while retaining the “four square metre” density rule.

The industry has been working at 50 per cent capacity, with vaccination requirements for workers from the 12 western and southwest Sydney local government areas of concern.

Health Minister Brad Hazzard also confirmed Tweed, Byron Shire and Kempsey council areas would go into lockdown from Tuesday for seven days after a coronavirus-infected essential worker flew from Sydney to Ballina on Saturday and was active in the community.

The Queensland government will as a result lock out Tweed and Byron Shire residents from Wednesday, except for limited essential purposes. Kempsey has not been included in the health order.

Those entering Queensland from a non-restricted area can only do so if they travel through restricted areas in private transport without stopping.

As double-dose vaccination coverage in NSW surpasses 54 per cent, Mr Hazzard revealed people aged 18 and under will be able to create a “friends bubble” of three, allowing them to visit each other’s homes.

The NSW crisis cabinet agreed on Monday night to offer relief to families and kids after months of lockdown and home schooling.

The three friends must live within five kilometres of each other or in the same local government area, NSW Health declared.

Mr Hazzard admitted health authorities expressed concern about the plan, but said the government’s job was to weigh multiple imperatives.

“We’re in an epidemic and everything has to be a balance,” he said.

“The strict epidemiological views would be ‘we all should stay somewhere away from everybody else forever’, but the mental health issues and other socialisation issues and the fact that we are human beings means there has to be a balance reached.

“We’ve got to recognise the need for mental health and socialisation and the things young people do as part of growing up, but keep them safe.”

Outdoor gatherings of up to five fully vaccinated adults with their children have been permitted for the past week.

The government’s signal on reopening the building sector comes a day after the Victorian government shut down construction in multiple areas, including Melbourne, for two weeks.

The shutdown followed a violent protest outside the CFMEU head office in Melbourne on Monday with large protests continuing on Tuesday against mandatory vaccinations for construction workers.

There are currently 1266 COVID-19 patients in NSW hospitals, with 244 people in intensive care units and 118 on ventilators.

The state is likely to reach the 70 per cent double vaccination milestone that will allow more freedoms in the first fortnight of October.

Government modelling suggests daily COVID-19 infections may have already peaked in NSW, but hospitalisations will peak in October.

On Monday the central west NSW town of Cowra was forced back into lockdown when a nine-year-old boy tested virus-positive.

Speak to the dead: Amazon Alexa to use the voice of your lost loved ones
‘No excuse’: RSPCA investigates dog kick at Melbourne protest
Today's Stories