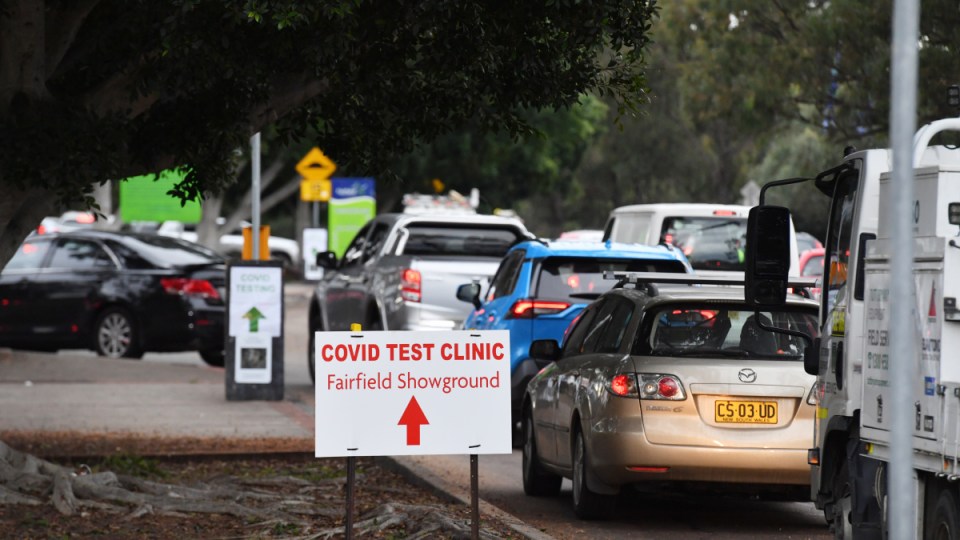 NSW’s virus cases have again spiked to nearly 100, spurring a new requirement for residents of a COVID-hit local government area to have regular testing.

Friday’s 97 new infections came from a record more than 77,500 tests in the previous 24-hour period.

The total number of cases linked to the Sydney outbreaks has risen to 1026.

But the number of people out in the community while infectious is still alarming authorities. Of Friday’s cases, 29 were not in isolation for any of the infectious period, a further 17 were only isolated for part of that time and the “isolation status” of five is still being investigated.

“This is the number that is concerning. That number of people being infectious in the community keeps going up,” Premier Gladys Berejiklian said.

She renewed her plea for people in the Fairfield local government area – where three-quarters of Friday’s infections came from – to stay home when possible.

The latest case data has also prompted an expansion of the requirement for Fairfield residents who work outside their local government area to get tested every three days. That had previously applied to those who worked outside greater Sydney and tradies – now it is all workers.

NSW Health says they have until the end of Friday to get tested – and must do so even if they have no virus symptoms. They can go to work while they await results, but must carry proof of the test with them.

“We are seeing cases where people don’t have symptoms and yet they are carrying the virus and don’t know it,” Ms Berejiklian said.

Testing clinics have been inundated across south-west Sydney this week after the earlier order for Fairfield workers. Fairfield Mayor Frank Carbone said people had waited up to 24-hours for results.

“They need to be able to give those workers some form of accreditation straight after the testing so they can show the employers that they have been tested, not wait 24 hours and employees have to stay home,” he told Network Nine on Friday.

He rejected claims that people were flouting stay-at-home orders in the area, which has become the epicentre of the outbreak.

“I don’t see that in Fairfield. I see it minimal. I see people are really scared. They’re trying to look after their families,” he said.

“It has been a difficult situation and I shudder to think what would have happened had we not gone into lockdown when we did, given the cases and how transmissible the virus is,” she said.

“I want to stress, we will not hesitate to go harder  … What you need to do is make sure that any further restrictions take the numbers down and make sure that we keep the community strong together.”

“We need to remember that the cases we are seeing today reflect transmission evidence for five days ago up to 14 days ago, so anywhere you may have cases around you,” she said.

“You can’t go on the basis of where I have told you as a hot spot today. That may be different next week – so every time you leave the house, this weekend, please consider that the person you may come in contact with has COVID.”

“We are seeing that people are sometimes delay in getting a test. Again, my message, please do not delay,” Dr Chant said.

“My vision for this weekend is very much a stay at home. Do not leave the house unless it is absolutely critical to do so.”

NSW has 75 coronavirus patients in hospital, including 18 in intensive care. Five of those are on ventilation. One ICU patient has had a first dose of the AstraZeneca shot.

On Thursday night, Minchinbury Manor – an aged-care home in Rooty Hill – confirmed a contract cleaner had been diagnosed with the virus, prompting the centre to isolate all residents and staff.

Residents and staff will be tested daily, and five close contacts of the cleaner have been identified and sent into isolation.

Most Minchinbury Manor residents had been vaccinated against the virus. The cleaner had not.