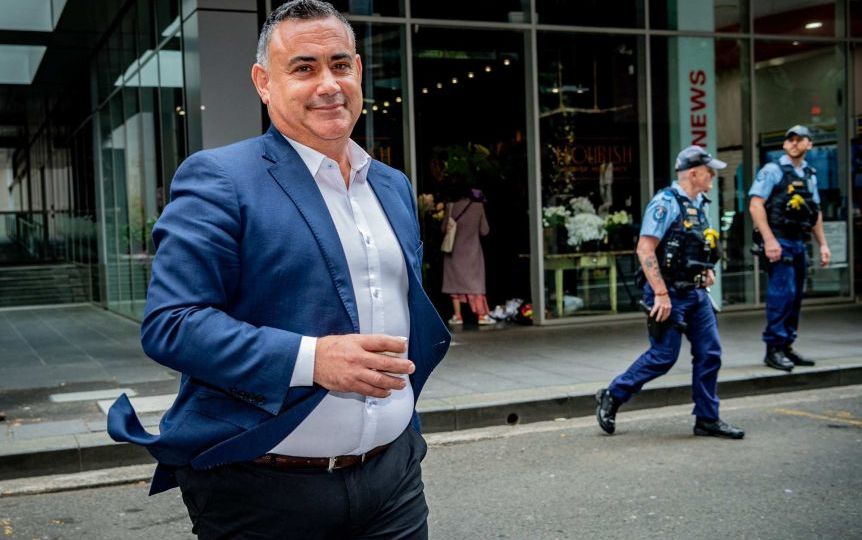 John Barilaro has refused to answer questions about his daughter's COVID fine.

NSW Deputy Premier John Barilaro has refused to comment on reports his daughter has been fined for breaching the state’s COVID-19 public health orders.

Domenica Barilaro, 20, was reportedly fined $1000 after allegedly driving from Queanbeyan, near the ACT border, to Sydney, and then to Canberra, before returning home on July 9.

“A young lady from down at Queanbeyan was spoken to by police … that lady was considerate of the investigation, polite and forthcoming,” he said on Friday.

“An infringement notice was issued to her.”

Under NSW’s current health orders, people in greater Sydney cannot go more than 10 kilometres from home (unless for essential work or another permitted reason) and are prohibited from going to the regions.

People from regional NSW cannot travel to Sydney, the Blue Mountains, Central Coast, Wollongong or to Shellharbour unless they have a “reasonable excuse”, including getting a COVID vaccine or go to a funeral.

Quizzed about the incident on Friday, Mr Barilaro refused to give details.

“I have no comment to make. Private citizens are entitled to their privacy, there is nothing here in relation to the public domain,” he told Sky News.

“Are you asking the hundreds of others who have also been fined?

“They’re private citizens and I’ll leave it at that.”

Also on Friday, Mr Worboys said NSW Police would focus this weekend on people leaving greater Sydney when they shouldn’t, as well as anyone flouting virus rules at city beaches and parks.

On Thursday night, one man was fined after setting up what police described as a “pop-up party” in Manly.

“The young man tried to convince police that it was some sort of marketing strategy or exercise strategy when clearly, clearly, it wasn’t,” he said.

“The people who contacted police described it as a party in the street.”

Mr Worboys said police attended more than 960 COVID-related jobs on Wednesday, with about 600 from reports to Crime Stoppers.

“In total, police detected almost 400 people breaching the Public Health Orders, resulting in about 220 legal actions, ranging from fines through to criminal charges,” he said.

“These numbers are concerning, as the more people do the wrong thing, the more chance there is of the virus spreading.”