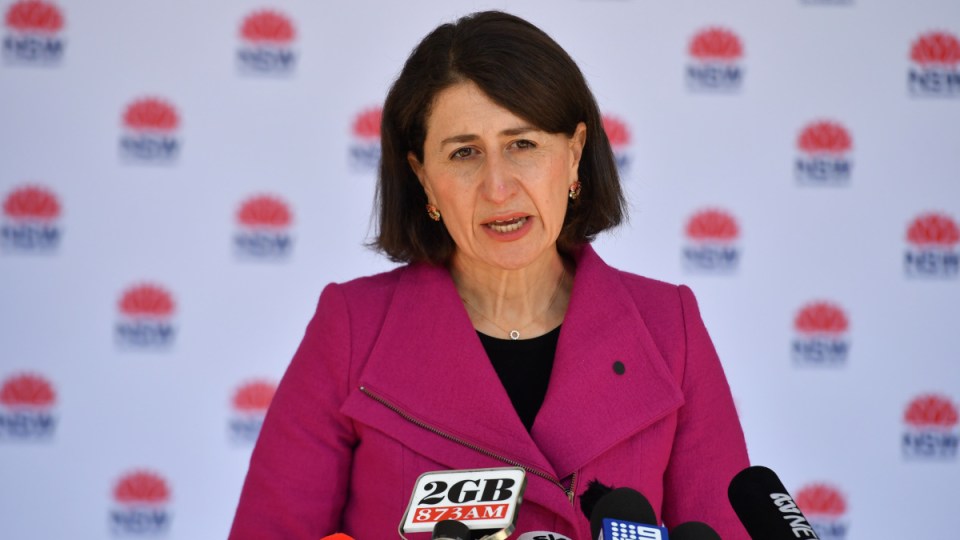 NSW Premier Gladys Berejiklian says the next few days will be critical to combat the COVID outbreak. Photo: AAP

NSW has recorded 35 new locally acquired COVID-19 cases as Sydney reaches the halfway point of a 14-day lockdown that Premier Gladys Berejiklian says is having the “desired effect”.

It’s the highest number of daily cases since the first wave of COVID-19 in early 2020, but Ms Berejiklian said it was pleasing that most of the cases were isolated throughout their infectious period.

“Whilst as predicted the number of cases are going up, we’re seeing a greater proportion of those cases in isolation which is exactly what we want to see,” Ms Berejiklian said on Saturday.

Nine of the new cases were infectious whilst in the community.

The new cases take the outbreak tally to 261.

The Premier said she wanted to see the proportion of new cases that were infectious whilst in the community reduce further.

“If you want to get out of this lockdown as soon as we can, we need that trend to continue.”

More than 56,000 people were tested during the reporting period.

The Premier said it was “too soon” to tell whether the lockdown of Greater Sydney, the Central Coast, Blue Mountains and Wollongong will be extended beyond July 9.

“If all of us continue to do the right thing, we’re able to leave the lockdown in a timely way. The next few days will be telling,” Ms Berejiklian said.

She asked Sydneysiders not to let their guard down as the city enjoys a sunny weekend after a week of rain and lockdown.

Among the current cases are two health care workers who picked up the virus while working at Royal North Shore Hospital, after being exposed to a student nurse whose positive case was announced on Wednesday.

Neither worked while infectious.

They bring to ten the total number of health care and aged care workers who acquired the virus via the student nurse. The other eight were household contacts.

The epicentre of the outbreak, which now tallies 261, is shifting from Sydney’s east to the southwestern and western suburbs, the new cases reveal.

Anyone who has been in the centre of Auburn in Sydney’s west since June 27 should be tested for the virus even if they don’t have symptoms, Chief Health Officer Kerry Chant said on Saturday.

A number of exposure sites in Auburn have been identified in recent days, including an Aldi and Woolworths.

Those in the Penrith area should also be on high alert as traces of the virus have been identified in the sewerage network, Dr Chant said.

Other western Sydney venues were on the list of 35 possible exposure sites identified by NSW Health on Friday evening.

Anyone who attended Exquisite Brows and Spa in the Marrickville Metro between 9am and 5pm last Saturday is a close contact and must isolate for 14 days. A Strathfield medical practice, the Manly Novotel and the Eastlakes Woolworths are also close contact venues.

Further alerts have been issued for venues in Burwood, Auburn, Homebush, Strathfield, Eastern Creek, Roselands, Villawood and Lakemba in Sydney’s inner west and west; Bondi Beach and Bondi Junction in the east; Eastlakes, Matraville, Oatley, Caringbah, Kirrawee, Rockdale and South Hurstville in the south and southeast; and Avalon in the northern beaches.

Two legs of the 400 bus route last Thursday have also been identified as COVID risks. The full details are on the NSW Health website.

Ms Berejiklian warned on Friday that the next few days were “critical” and that authorities wanted to see a rise in the proportion of new cases already in isolation.

“Come early next week we do want to see that tide turned,” she said.

Meanwhile, NSW has lifted stay-at-home orders for travellers from Western Australia, the Northern Territory and parts of Queensland as those states and territories have eased their own lockdowns.

However, visitors from Brisbane and Moreton Bay must remain at home, as must anyone in the Greater Sydney area.