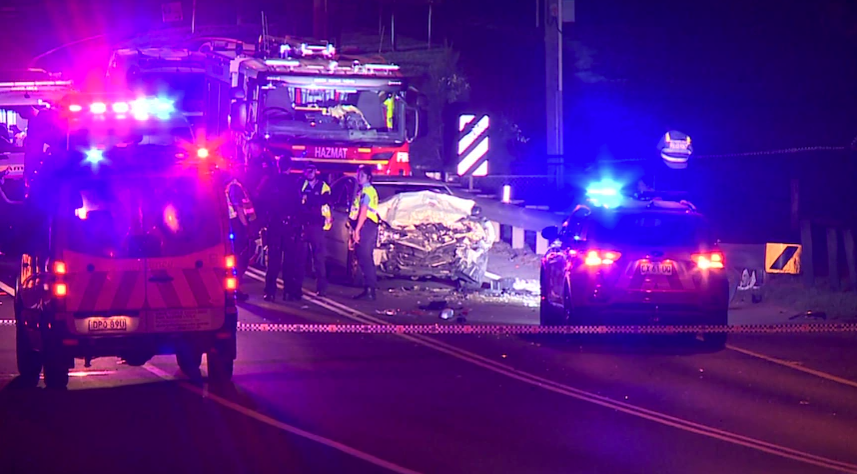 Police are hunting two men involved in an “appalling” road rage incident in south-west Sydney that left a car flipped onto its roof and a motorcyclist in a critical condition.

NSW Police said the two occupants of a Toyota Hilux ute were involved in a verbal argument with the driver and passengers of a silver Honda Civic just before 10.45pm on Monday while stopped at an intersection at Georges Hall.

Afterwards, the ute followed the Honda along Henry Lawson Drive and slammed into the back of it, forcing it off the road and causing it to roll onto its roof in bushland.

The older man from the Honda was then stabbed in the back of the left leg.

Police said the two aggressors then got back into their ute and drove north back on Henry Lawson Drive towards the Hume Highway.

“There, again for unknown reasons, they have crossed onto the wrong side of the road and have collided head-on with a silver Camry and a BMW motorbike,” Detective Chief Inspector Darren Sly said.

The 24-year-old motorcyclist was taken to Liverpool Hospital in a critical condition with fractures in his ribs and a leg but is now stable.

The driver of the Camry, a 58-year-old, was also taken to hospital with chest injuries.

Detective Chief Inspector Sly is hoping a public appeal for information – including dash cam footage – could help identify the two men in the Hilux.

He said there would be significant damage to the front of the ute.

“The actions of these men in the silver Toyata Hilux is appalling,” he said.

“It’s something which our community cannot stand for.

“It is dangerous and outright criminal and that’s why we’re trying to seek the assistance of the public today to try and locate these men.”