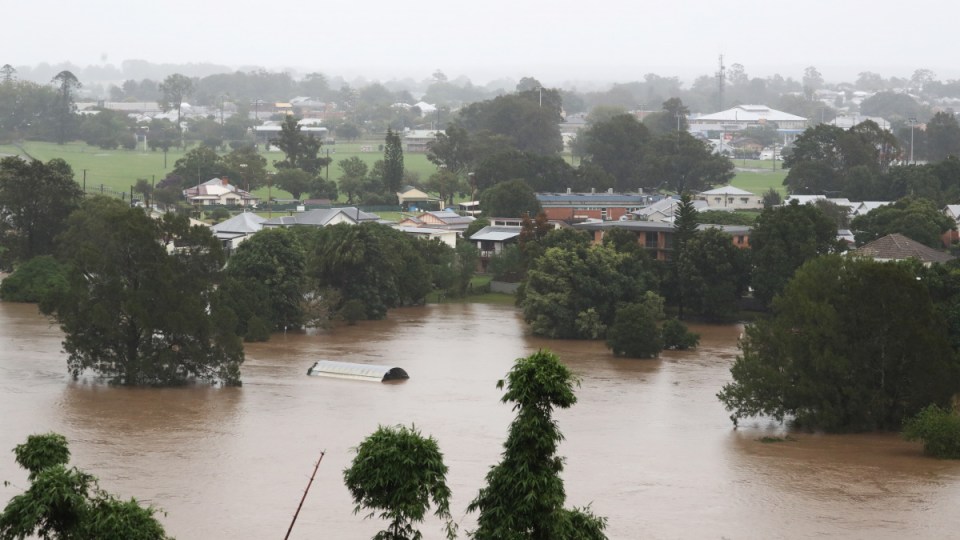 The Macleay River in Kempsey on Tuesday. Photo: AAP

NSW Police have issued a stern warning to anyone thinking of preying on flood victims, amid reports of looting on the mid-north coast.

Local police superintendent Shane Cribb said police would do everything they could to track down those responsible.

“My instructions to the police commander were you are to provide whatever it takes to support the community,” Superintendent Cribb said on Tuesday.

“Especially those isolated people who have been taken out of their houses and they’re already doing it tough, and to have people take it upon themselves to go into a premises and take something, steal something or whatever, is one of the lowest things I’ve seen.”

The reports came as thousands of people along the Colo River in the Hawkesbury region were ordered to leave their homes on Tuesday as major flooding hit.

Among them were people living in caravans along a stretch of the Hawkesbury River from Windsor to Wiseman’s Ferry.

High-level flooding is expected to continue in the area for most of the week.

The latest evacuation orders came as authorities said hundreds more millimetres of rain could fall, causing rivers to rise and break their banks, and the flood warnings stretched south into Victoria.

“We have flood watches and flood warnings enforced from the Queensland border all the way down the east coast to Victoria,” she said.

“We also have a developing flood situation in inland NSW. My colleagues here in Sydney … have never seen anything like it.”

“It is catastrophic in its dimensions and the impact will be severe and the fact that 15,000 people may need to be evacuated the next 24 to 48 hours is a huge concern,” she said.

Relentless rain has lashed the NSW coast for days, causing major flooding similar to the 1988 and 1990 flood events along the Hawkesbury River.

There are warnings for moderate flooding along the Nepean River at Penrith and floodwaters are expected to affect the upper Nepean.

Ms Berejiklian warned that even when the rain stopped, the rivers would keep rising.

“If you have been asked to be on alert, for evacuation, please get together your precious belongings, make sure you are safe and make sure you’re ready to leave at very short notice,” she said.

Two Australian Defence Force aircraft have been made available to the SES on the NSW South Coast for search and rescue activities.

Prime Minister Scott Morrison said the government had received a request for 1000 ADF personnel to help with the NSW clean-up.

“We want it to be done swiftly and effectively to try and get these communities back on their feet as quickly as we possibly can,” Mr Morrison said.

“No lives to this point have been lost, thankfully.”

Mr Morrison said some $3.5 million had already been distributed in federal government assistance to those affected by floods.

Elsewhere, there have been reports of panic buying in the flood-hit areas, with supermarket shelves emptied of staples such as bread.

In Crescent Head, near Kempsey, in one of the hardest hit areas, police closed an overpass on the Pacific Highway on Tuesday to allow a crane to lift essential grocery items onto a road for distribution to the community. They included food, medication and, potentially, hay for stranded animals will also be lifted as part of the operation.

Conditions were expected to ease across much of NSW on Tuesday afternoon, but the Bureau of Meteorology said the state was “not out of the woods yet”.

The mid-north coast was still being pummelled by heavy rain. It has already received over a metre of rainfall since Thursday.

“Putting that into context, that is two-thirds of annual rainfall falling in the space of just one week,” Ms Imielska said

Mount Seaview, just west of Port Macquarie, has had a whopping 1082 millimetres of rain – with another 107 millimetres from 9am on Tuesday.

Comboyne station – also near Port Macquarie – had also had more than a metre of rain.

Meanwhile, the wild weather is moving south to Victoria, with severe weather warnings issued for coastal areas in Gippsland and the Otways.

The rain and wind was due to arrive in Victoria on Tuesday afternoon and last into Wednesday.

“We won’t see anywhere near the significant impacts of this system into Victoria that we’ve seen across NSW and Queensland,” said senior forecaster Richard Russell from the Bureau of Meteorology.

“Having said that however, we will still see impacts into parts of Victoria as this system evolves.

“We’ll see increasing rainfall … that will continue to intensify.”

Wilsons Promontory, Victoria’s southern-most tip, and surrounding areas can expect up to 200 millimetres of rain over 24 hours to late Wednesday.