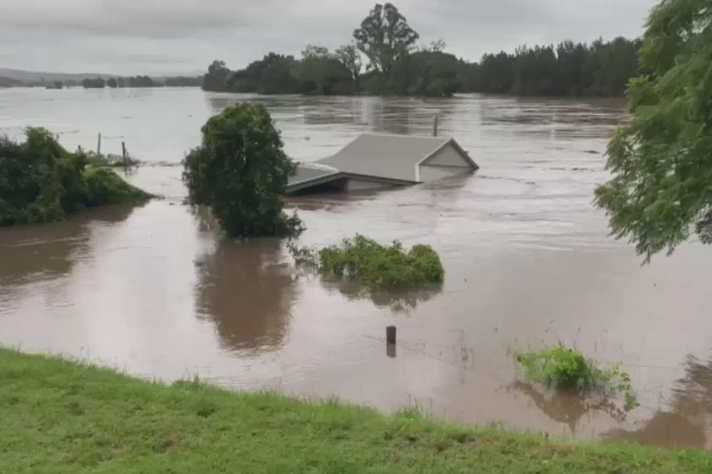 On Friday this house stood where it had been for decades. Today it is matchwood after being carried away by the raging Manning River.

Sydney’s main water source, Warragamba Dam, has spilled over for the first time since 2016, as rivers in Australia’s largest city swell amid a downpour.

Water began cascading over the dam wall about 4.00pm Saturday, not long after authorities warned much of Greater Sydney to brace for flooding.

NSW’s coastline has been pummelled by a days-long rain event that the Bureau of Meteorology (BoM) has warned will continue into next week.

Several areas have sustained record falls, and while the dam — which is about 70 kilometres from Sydney’s CBD — also spilled over in 2012 and 2013, the last major flooding event was in 1990.

An evacuation order was issued for Picton, about 40km away from the dam, just over an hour after it started overflowing.

Authorities are particularly worried about the situation in the nearby Hawkesbury-Nepean valley, which the NSW State Emergency Service (SES) says has one of Australia’s highest flood-danger levels.

Several parts of the state, particularly on the Mid-North Coast, have already been evacuated amid rising water levels and authorities have warned Sydneysiders to brace for more rain.

The BoM is predicting up to 100mm could fall across Greater Sydney on Sunday and Monday.

“It’s a very dynamic and evolving flood situation and we could see some very deep and rapid responding rivers with very high levels,” he said.

A WaterNSW spokesperson said public access to all dams had been blocked until “further notice” as a safety precaution.

“WaterNSW has established a dedicated 24-hour incident management team that is working closely with the Bureau and the NSW State Emergency Service to monitor weather and inflows to dams,” they said.

“WaterNSW will continue to work closely with Sydney Water and NSW Health throughout the rain event, to watch for potential water quality impacts on untreated supply.”

Elsewhere in NSW, a house has floated down the Manning River, near Taree, as the deluge from a dangerous weather system continues to flow in several areas in NSW.

Flood waters had inundated the home in Wingham, a Mid-North Coast township which was evacuated earlier on Saturday.

Dozens of homes throughout the state have been battered by damaging winds and heavy rainfall on Saturday,

There are currently nine evacuation centres in NSW, seven on the Mid-North Coast and two in the Hunter region as the severe weather event is set to continue well into next week.

NSW Premier Gladys Berejiklian has warned that the state is experiencing a “prolonged weather event”.

“None of us are out of the woods while the storm front is moving south, it is still going to be prolonged. The rain may not stop till Thursday or Friday,” she said.

Chester Hill in Sydney’s west was hit with a mini-tornado about 9:00am, bringing down trees, roofs and power lines leaving thousands without electricity.

The SES has responded to calls in the area and is working to “keep the community safe,” NSW SES Commissioner Carlene York said.

“It is very difficult to prepare for such a spontaneous, significant weather event … please don’t go on the roads because he could have been caught in that Chester Hill area just by passing through, if your trip is not urgent please remain where you are and remain safe.”

NSW floods: Picton evacuated as Warragamba Dam overflows and other catchments on the brink