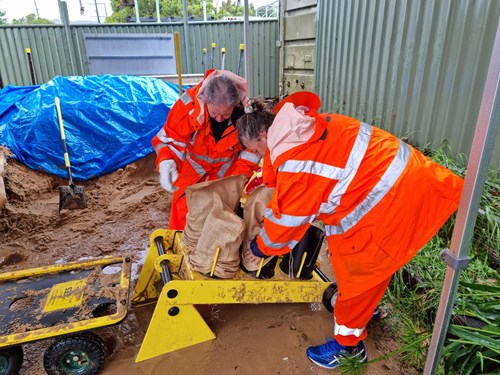 The NSW flood crisis is set to worsen with a new band of rain headed for the state and expected to push rainfall totals in some places up to one metre in the space of just a week.

The Bureau of Meteorology says eastern NSW is in for a double whammy, with Sydney’s Warragamba Dam already overflowing and adding to peak levels.

The primary reservoir of water supply for Sydney – located about 70km west of the CBD – could lead to flooding in Sydney’s west, specifically at Penrith and North Richmond later on Saturday.

Other dams such as Nepean, Cataract, Cordeaux and Avon are also expected to reach capacity and begin spilling, Water NSW said.

Hundreds of stranded residents have been rescued from their homes and cars by the SES, as the BOM warned of “life-threatening” downpours over Sydney.

There are currently nine evacuation centres in NSW, seven on the Mid-North Coast and two in the Hunter region as the severe weather event is set to continue well into next week.

NSW Premier Gladys Berejiklian has warned that the state is experiencing a “prolonged weather event” that won’t end anytime soon.

“None of us are out of the woods while the storm front is moving south, it is still going to be prolonged,” she said.

“The rain may not stop till Thursday or Friday.

“The most critical thing at this stage is to please respond to potential evacuation orders, the SES (NSW State Emergency Service) are doing their best to predict what might happen in the next few hours.”

Another band of rain is now moving down from the Kimberley in Western Australia will push through central Australia on Sunday.

On Monday it will pass over outback southern Queensland into northern NSW, where it will link up with the slow moving coastal trough that’s already caused widespread flooding on the east coast.

BOM meteorologist Jonathan How says it’s not yet clear where the rain band will dump the heaviest falls because they’ll be generated by hard-to-predict storm activity.

“That’s when we’ll see a very large burst of rain, across eastern NSW, dipping into northeastern Victoria, and southeast Queensland from Monday night, into Tuesday,” he told AAP.

The first dry day for NSW is not expected until at least Wednesday, possibly later.

Mr How said some NSW locations, particularly around the Port Macquarie area, had already recorded 500-600mm of rain in the past 48 hours or so.

The Hastings River peaked at 12.1m near Port Macquarie, breaking an eight-year-old record, and major flooding at Laurieton exceeded a record set in 1978.

“By Monday or Tuesday, it’s not unreasonable that some places will possibly be poking one metre of rain for the whole event,” Mr How said of the rain which began in earnest on Wednesday.

And it’s not just the rain causing havoc.

On Saturday morning a “mini tornado” ripped through a western Sydney suburb, tossing trees, ripping off roof tiles and spearing a trampoline into the side of a house.

Emergency services were called to Chester Hill around 8:30am after reports of widespread storm damage across the area.

More than 30 homes were damaged, many partially collapsed, and power has been cut to much of the area, Fire and Rescue NSW said.

Earlier, a house was dramatically swept away near the NSW town of Taree on the Manning River.

Surging flood waters lifted the house from its foundations on Saturday and it’s been filmed moving at speed down the river, which is expected to peak at 5.8 metres later in the day.

That’s higher than Taree’s 1978 and 2011 floods and close to the record flood level of six metres recorded almost a century ago in 1929.

Lyle Edge says his brother lived in the house with his partner. They should have been getting married on Saturday. Instead they’ve been left homeless and their pets are dead.

The State Emergency Service has responded to more than 3200 calls for help since the wet weather began, including 335 flood rescues overnight.

“A lot of those jobs are for people who are stuck in their houses, caravans, animals isolated by floodwater, people stuck in cars – it’s really for a wide mix of things,” he said.

Most of the calls are coming in from Taree, Wingham, Port Macquarie, Macksville, Settlement Point, Wauchope, Laurieton and North Haven.

“Every minute we get two or three more rescues coming through at the moment.”

This is not a typical sort of flood, these are life-threatening floodwaters and (it’s) a very serious situation.”

Calls for help from the Hunter and Sydney regions are starting to roll in too, as the system moves south, Mr McCullough said.

Those in low-lying properties around Taree, Dumaresq Island, Cundletown, Central Wingham and Wingham Peninsular were ordered to evacuate on Saturday morning.

The Hastings River peaked at 12.1m near Port Macquarie breaking an eight-year-old record, and major flooding at Laurieton exceeded a record set in 1978.

Rain has plagued the Sydney area for most of the week, but Saturday’s deluge has been at another level, the BOM says.

The Public Information and Inquiry Centre has been activated, allowing members of the public to contact 1800 227 228 for information about the severe weather and flooding at any time of day.

The deluge is set to continue well into next week and could deliver the heaviest rainfall since February 2020, when Greater Sydney was hit.

Sydneysiders have been warned to “stay inside” as a large stretch of the NSW coast endures a wild weekend of downpours causing “life-threatening” flash flooding.

The weather bureau on Saturday morning issued a severe weather warning for an area stretching from the mid-north coast to the far south coast of NSW as well as Canberra.

“Some of those locations will probably have floods of record in those areas,” SES spokesman David Weber told the ABC.

We are asking people to please act on all advice given by emergency services immediately.”

“The challenges we are facing is that there are multiple evacuations across our northern zone at the moment, resourcing at the moment is quite a challenge,” he said.

“It is a significant weather event and we’re asking people to be very mindful of the situation.”

Places like Bowraville on the mid-north coast received more than 100mm in one hour.

Sydney’s rain will also be dangerous, the Bureau of Meteorology warned, with the wet weather seeing the annual Golden Slipper horse race at Rosehill called off.

Van Gestel’s inspection came after two horses galloped over the course but further rain confirmed surface water on two sections of the track would have made racing unsafe.

The BOM’s Agata Imielska said the falls in Sydney would be significantly more intense than in recent days.

“This will be the difference between what could seem like inconvenient rain, to actually something that might be quite dangerous and threatening,” she said.

“It is really important for Sydneysiders to be mindful about reconsidering their plans.”

While the rain will be “substantially heavier” than what Sydney copped earlier this week, it will not be of the same intensity that hit the mid-north coast on Thursday and Friday.

“In these areas, there may be periods of intense rainfall, potentially leading to life-threatening flash flooding.

“Roads are likely to be cut off by water, and there will be an increased risk of landslips over this period.”

“We’re seeing rainfall totals of over 100mm falling in about an hour,” meteorologist Agata Imielska told reporters on Friday.

“That is very dangerous rainfall.”

The SES issued an update at 3.30am Saturday saying saturated catchments coupled with more rain would create a  “potential life-threatening weather event”.

Hundreds are rescued from floods, Warragamba Dam overflows and other catchments near capacity