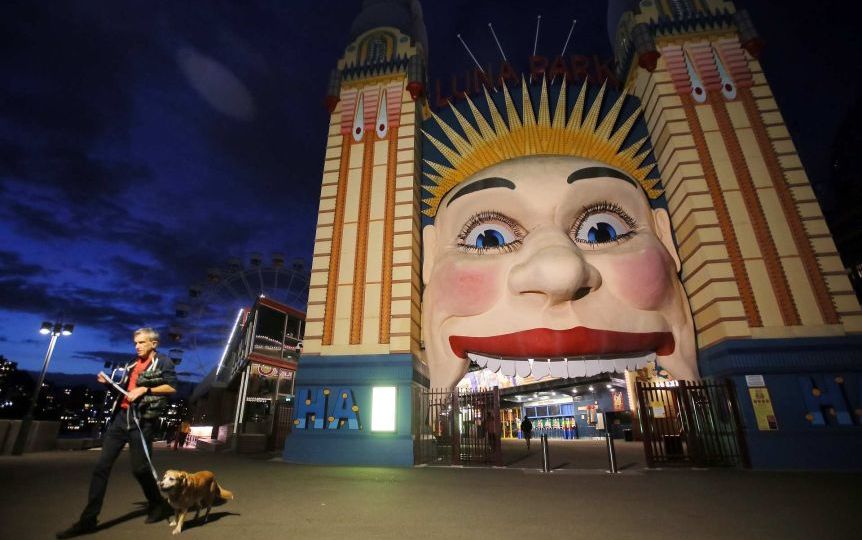 The company secretary for Sydney Luna Park was fined on Wednesday. Photo: AAP

Luna Park Sydney will pay a $5000 fine after large crowds gathered to watch the New Year’s Eve fireworks but has asked NSW Police what specific rules it broke.

A spokesperson for Luna Park Sydney told the ABC it would “immediately” pay the fine but said NSW Police had not specified which aspect of the public health order was breached.

The spokesperson said it was legally permitted to host 5000 people on the foreshore but had limited those numbers to 3000 and had a COVID-safe plan.

“Our legal advice is that Luna Park Sydney did not breach NSW public health orders during the New Year’s Eve event,” the spokesperson said.

“However, we have co-operated fully with police during their inquiries and have decided to pay the fine.

“The safety of our guests and our staff has always been and will continue to be our No.1 priority.”

Meanwhile, NSW Health has issued an alert for returned travellers or staff at Brisbane’s Hotel Grand Chancellor who have been at the hotel since December 30.

NSW Health said anyone in this category needed to get tested immediately and isolate for 14 days after they were last at the hotel, regardless of the test result.

It follows the Queensland government notifying authorities there were people from NSW staying at the hotel who have since returned home.

Genomic testing has revealed six people linked to the hotel, including a cleaner, her partner and four guests, have the British strain of the virus.

The alert comes as NSW Premier Gladys Berejiklian has warned people will still need to be COVID-safe after taking the vaccine, as the state recorded one new locally acquired case.

The new infection is a child who is a household contact of a known case.

Health authorities have also been able to link a couple from Mount Druitt who tested positive on the weekend to the Berala cluster in Western Sydney.

Although a link has been found, chief health officer Kerry Chant said contact tracers had been unable to determine how the couple contracted COVID-19.

“It means we are currently testing widely around what we call ‘upstream contacts’, a broad net, to attempt to find any missing link in those chains of transmission,” Dr Chant said.

Dr Chant estimated it would take three to four weeks for the state to “mop up” chains of transmission from recent outbreaks in Sydney.

Ms Berejiklian acknowledged there was growing discussion about vaccine roll-out in Australia but stressed the vaccine would not be a silver bullet.

“Just because some people in the community, whether it is a small number or a larger number, [will] have the vaccine, does not mean that the rest of us can relax. Quite the opposite,” she said.

Ms Berejiklian encouraged everyone to get vaccinated and said she was looking forward to receiving the vaccine as soon as possible.

“But once the vaccine begins to [roll] out, it does not mean we stop being COVID-safe.

Last week, the federal government outlined its plan to administer the Pfizer vaccine to “first-priority groups” because Australia will get that drug first, but only in a limited supply.

When asked why some states had only locked out certain Sydney suburbs and others had locked out the entire greater Sydney region, Ms Berejiklian said an agreement had still not been reached on what constitutes a hotspot.

“I would love to rely on the health advice for that hotspot but, unfortunately, states weren’t willing to accept the health advice because that would mean that there’d be nowhere in NSW that was a hotspot at the moment,” she said.

More than 20,000 tests were conducted in the latest reporting period.

Overnight, virus fragments were found at the West Hornsby sewage treatment plant which has prompted a warning for residents in suburbs including Glenfield, Pennant Hills, Castle Hill, Hornsby, Normanhurst and West Pennant Hills.

A new venue alert is also in place for the Groomsmen barber shop at Warriewood Square on January 6.