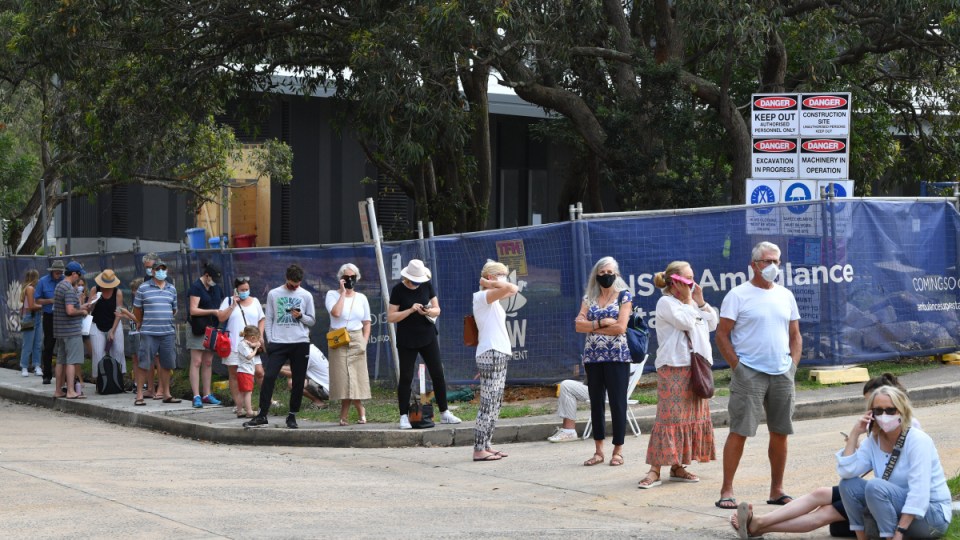 Sydney’s northern beaches has entered a quasi-lockdown, after a coronavirus cluster was sourced back to an international case.

Health authorities are racing to contain the mystery cluster which on Thursday evening numbered 17 people.

NSW Premier Gladys Berejiklian has asked residents to stay home and not leave the area for the next three days.

NSW Health is asking locals to avoid non-essential visits to aged care facilities and hospitals, and to steer clear of high-risk venues like gyms and restaurants.

Ms Berejiklian has confirmed the outbreak was on Thursday night sourced to an international case.

“That’s really the challenge for our genomic experts at the moment.”

“Somehow that’s obviously gotten out into the community. The original source is an overseas strain and the genomic testing will give us more details, I’m hoping later today,” the Premier told the Nine Network on Friday morning.

“We’re extremely concerned. That’s why we’re saying to everyone on the Northern Beaches community, stay home unless you absolutely have to be out and about.

“We want to reduce mobility, reduce people going to venues which are regarded as high risk, when we know there’s the virus spreading in the community.

“And of course, if you’re catching public transport, going grocery shopping, please make sure you’re wearing a mask. We’re asking everyone in greater Sydney to be on high alert.”

Ms Berejiklian confirmed more cases linked to the cluster would be announced later on Friday.

“I am asking people to brace themselves today, we are going to see more cases overnight. No doubt about it.

“I will be providing an update with the Health Minister later in the day, I want everybody to brace themselves. We are going to have a considerable amount of cases come, I think, during the day, and that is because people have come forward to get tested.”

The reason for the virus’ proliferation across the northern beaches is unclear, with sewage testing last week uncovered no COVID-19 fragments in the area.

Authorities believe interactions at Avalon RSL on December 11 and Avalon Bowlo on December 13 may have acted as super-spreader events.

One of the new cases is an aged care worker at the Pittwater Palms facility.

Ms Berejiklian on Thursday said northern beaches nursing homes would be locked down until the outbreak is contained.

The Pittwater Palms facility is closed to visitors, while those in contact with the infected worker are being tested and are self-isolating.

Health alerts have now been issued for almost 30 venues across Sydney, while multiple northern beaches community facilities have shut.

“The temporary closures we are announcing for the next three days are in the interest of everyone’s health and safety and really important while the contact tracers continue to do their work and NSW Health get more of a sense on where we stand,” northern beaches mayor Michael Regan said in a statement.

On Thursday evening, WA’s premier Mark McGowan ordered anyone who entered his state from NSW to self-isolate for 14 days.

Anyone already in WA who has been in NSW since December 11 must self-quarantine in a suitable premise and get tested as soon as possible.

The Queensland government announced anyone arriving from Sydney on Friday, and who has been to the northern beaches since December 11, must get tested and self quarantine for 14 days.

Those measures will toughen further from 1am on Saturday, when travellers from Sydney who have been to the region will be forced into hotel quarantine.

Northern Territory authorities said anyone from Sydney’s Northern Beaches Council area travelling to the NT will need to undertake 14 days of mandatory, supervised quarantine in either Alice Springs or Darwin.

Tasmania elected on Thursday to ban entry to anyone who had visited the venues on NSW’s health alert list.

Victoria told entrants to the state from the northern beaches that they must get tested and quarantine in their home or accommodation for 14 days.

The federal government is urging the states and territories to exercise some restraint in relation to border closures.

“Let’s recognise that NSW has shown an exemplary capacity to get on top of these clusters,” Finance Minister Simon Birmingham said on Friday.

His mid-year economic update is predicated on borders staying open.

‘We are going to see more cases’: NSW virus cluster of international origin