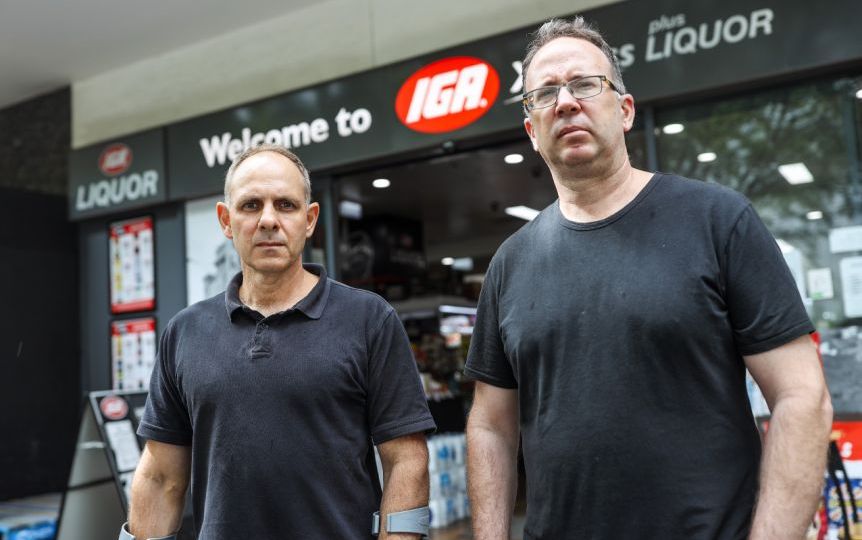 Scott Hill and Ward Mellick are preparing to vacate their supermarket due to safety concerns. Photo: ABC

Sydney’s trouble-plagued Mascot Towers are “leaning” and remain so unstable, businesses in the building will no longer be accessible from Friday, a legal letter has revealed.

Such is the risk to public safety, the owners of shops and restaurants on the building’s ground floor have been told an exclusion zone will be set up around some areas next week.

The dangers were revealed in a letter from lawyers representing the building’s Owners Corporation, which was sent to business owners last week.

“Our client has been advised by the engineers for ‘Mascot Towers’ building that the facades of the buildings are leaning and unstable and has identified a genuine safety risk to the public on both the Bourke Street and Church Street boundaries,” the letter reads.

“On 4 November 2020 SafeWork NSW attended the site and acknowledged the advice of the engineers that the facades are an immediate safety concern for which an exclusion zone must be established.

“You should assume that as and from 18 December 2020 your lot will no longer be accessible.

“Owner-occupiers and tenants will not be able to trade from the lot for an indefinite period of time from this date.”

While not explicitly told they need to leave, owners are preparing to vacate their businesses this week, which they say will leave about 70 staff out of work.

Scott Hill, co-owner of a supermarket and cafe in the building, said he received the letter last Thursday.

“When we received it, just disbelief,” he said.

“We saw a whole life of work we’ve done disappear.

“We were given seven days to get out and we were going what do we do?

“We don’t have time to find out what our rights are and what other options we have.”

He employs 15 staff across his businesses.

“This is just going to ruin their festive time and, especially with coronavirus, it’s hard getting jobs overnight or finding employment,” he said.

“What do you do with that? Where do you take that? It’s devastating.”

Jeff Zou, owner of Sugarbaby Cafe, has operated for 10 years.

He said his business was told to close in June when hoardings were put up around some of the shops. He has been operating a coffee cart nearby that will also have to close by the end of the week.

“It’s pretty tough for all the shops around here, it’s just one week before Christmas … it’s just not fair,” he said.

“It’s very hard to tell [my staff], ‘oh sorry mate, you have no job from tomorrow’.”

Residents in the development were evacuated in June 2019, due to cracking in the building’s primary support structure – something that has left owners facing a multimillion-dollar repair bill.

The letter to businesses came alongside a SafeWork NSW improvement notice, which said there has been an inadequate response to risks of falling objects identified in reports about the building in July and April.

In a statement, NSW Minister for Better Regulation Kevin Anderson said the notice did not mean the businesses had to close.

“There are a range of measures that can implemented that will ensure compliance,” he said.

Businesses were expected to meet small business advocates on Monday.