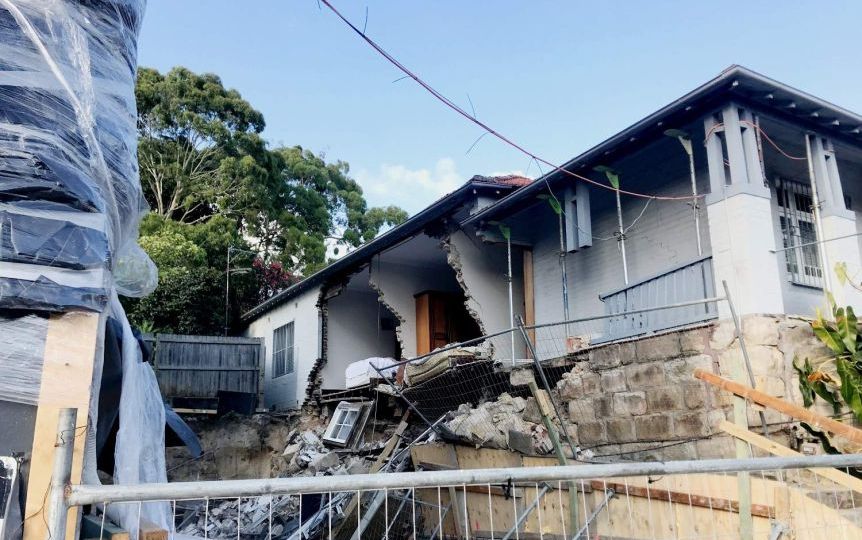 The walls and windows fell to rubble during the collapse. Photo: ABC News/Alexia Attwood

An investigation is underway into what caused the partial collapse of a house in Sydney’s east, after an exterior wall crumbled while two people were inside.

Bricks and windows from the bungalow on Curlewis Street, Bondi, cascaded into an adjacent construction site about 5.00pm yesterday, in an event neighbours said sounded like an “explosion”.

The 84-year-old owner of the home and her son-in-law were inside the house when it fell apart but were not injured.

This morning, the interior of the property’s bedrooms could be seen from the street, and engineers are visiting the site amid fears more of the house could fall.

Rescue teams say it appeared that the foundations of the house were undermined by construction work at the site next door.

TC Build, the company responsible for the neighbouring building site, removed its signage from the area after yesterday’s incident.

The the company’s site manager Neil O’Brian said he was unsure if the construction was to blame.

“Let’s just wait for the inspections and let’s get the engineers sorted out, let’s get it sorted out first,” he said.

TC Build’s signs were replaced this morning after a directive from Waverley Council.

Mr O’Brian said the signs were removed because of the wind.

Matthew Borg, who works at the tyre shop across from the house, said he heard a loud crash and rushed outside to see a large dust cloud engulfing the area.

“When it all settled down I was like hang on I can see into someone’s house there.

“That doesn’t look right. And then once it’s completely settled I was like, ‘oh no it’s just completely destroyed everything’.”

Neighbours contacted the certifying company after noticing cracking in adjacent walls around the construction zone.

Ivan Boulle Consulting visited the site on December 3 and asked the company to stop working.

“We told them to stop working until a structural and geotechnical engineer could inspect the site,” the director Ivan Boulle said.

Curlewis Street is closed in one direction and the area is closed to the public.