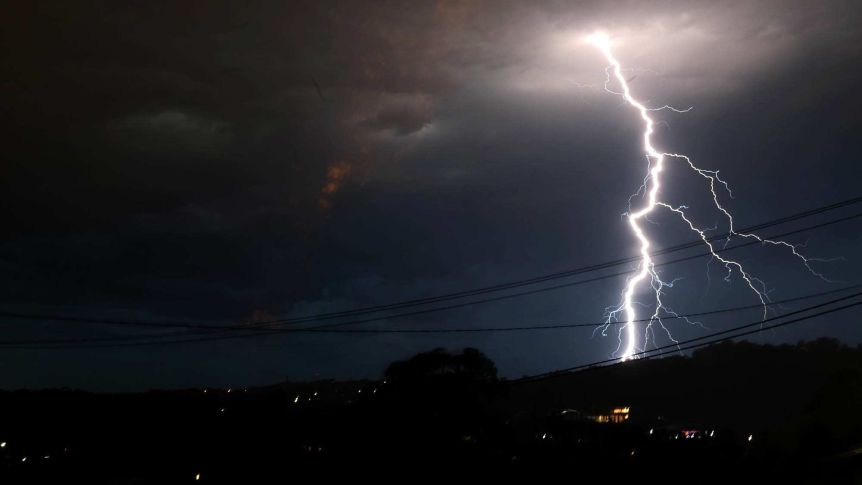 There were more than 1100 lightning strikes recorded during the destructive storm. Photo: Twitter/Robert Watson

Temperatures in the mid to high 30s and increasing humidity left people in the Hunter hoping for a southerly buster to cool things down on Monday, but when the cool change hit it lived up to its name.

More than 20,000 homes lost power across the Hunter overnight after the storm hit about 8pm on Monday.

Power has since been restored to the majority of properties, with all expected to be back online by 8pm Tuesday.

More than 1100 lightning strikes were recorded, with high winds and torrential rain combining to bring down power poles and lines.

A nursing home at Stockton lost its roof, forcing residents to evacuate, and a bus shelter smashed into a retirement village at Fern Bay.

Roof blown off for second time

“There are no reports of injuries to any residents, staff or other people,” Mr Sadler said.

“Other parts of the facility are operating as normal as the damage is contained to this wing.”

“Around 30 residents in the upstairs Ibis Wing were moved to safety,” Mr Sadler said.

“We are liaising with family members and the emergency services to arrange temporary accommodation for these residents.

“PAC Wescott will be able to house some of them in other rooms, and we are currently making arrangements with other local residential care providers for the interim accommodation of the remaining residents.

“We are following our emergency plan as we respond to the situation.

The weather event comes 16 months after similar damage to an adjacent section of the roof in August 2019.

A woman had to be rescued from her home after she was trapped inside by a large fallen tree.

“The advice to people this morning is if you wake up and find damage please give us a call on 132 500,” Ms Fox said.

“Obviously, there’s still a number of power outages in the area and Ausgrid are working hard to restore power as quickly as possible.

“We’ll have a number of volunteers out and about today helping with the clean-up.”